I'm really hoping today is the day I finally don't have a fever. I took my temp this morning when I got up and it was normal so hoping it stays that way. I have been sick since MONDAY.  Started coughing and had a fever. Yesterday (Saturday) after STILL having a fever finally dragged myself to Urgent Care where I found out I do NOT have the flu (that test is unpleasant). The Dr gave me a z pack since he didn't know what else to do with me so hoping that does something.

In the meantime Trevor turned 17 and I stayed home for his birthday dinner. It just ended up being Jess, Trevor and Scott for dinner at Olive Garden. They brought me home some Chicken Parmigana. 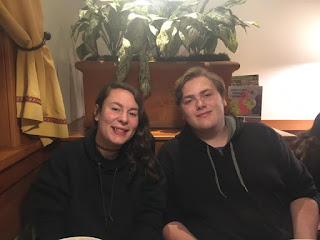 We had cake after they got home. I took some great pictures but somehow when I went back to look at them they are all a big blurr. This is the best one. I don't know why all of a sudden my phone is doing like a delayed picture thing that keeps making my stuff come out blurry. 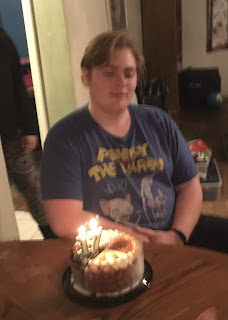 Yesterday Scott, Trevor, Melissa & her bf went to Boomers and played some mini golf and did the go carts and stuff. I think he ended up having an ok birthday even though I was half dead :(

This week I watched all 6 seasons of Sex In The City and then finished it up with the 2 movies. I had only seen the movies before so thought I'd try out the show.  The first few seasons are so much better than the last one. The last movie is utter garbage. I hate that Carrie is ok with having a man that's an asshole in the end. It's like she just flits from one asshole to another. Guess that's not just in real life haha.

In other news I've lost like 10 pounds this week. Hardly anything sounds good to eat.
Pin It
Posted by Julie H at 8:40 AM

No coronavirus? :-) I am glad you are feeling better. I can't believe you could sit through 6 seasons of that show. I used to love it but never saw the movies because I didn't think they'd be good.

@Peg, could be, they aren't testing for it much it sounds like. At work today a lot of other people are sick too.