Teleworking With The World

Anyone else wondering how long til the Zombies appear?  Like are we living in a movie or is this really happening?

I'm home now teleworking. Yesterday we had an employee come to work in our office. This employee was previously working in another office which was closed due to exposure. Like What the Actual Bleepidy Bleep! Poor girl we're all acting like she's the cooty girl and she's just trying to get a paycheck but this is some scary shit.

Through the mill I found out that the man that went to their office was a dairy farmer who had been on one of the cruises. He DIED 2 days ago. I know two people that knew him personally.  Super sad. They all say he was a great guy. Once they release his name, if they do then I'll share a fun You Tube video I found.

So between that and having to ask people at the counter if they have been sick, someone in their family been sick, been to another country etc,  and the above I requested if I could just telework and my boss said yes. Today we've already got an email that if you are telework ready you can just do it all the time now. TG less exposure to people.

The cougher girl came back to work yesterday still coughing. She told someone on the phone that she had a note from the Dr that it was allergies and she wasn't contagious. Yeah sureeee lol Everyone is afraid to cough or sneeze now because of people like me (did I mention I am still coughing here and there from when I was sick weeks ago? Usually just one cough though)

All the cities around me have the shelter in place except for where my parents live and work.

All the events but one that I had signed up for are cancelled or postponed. Everyone is going to have a hell of a lot of inventory once things get back to normal!

So for something not scary here is my cabbage soup I made for St. Patty's day! 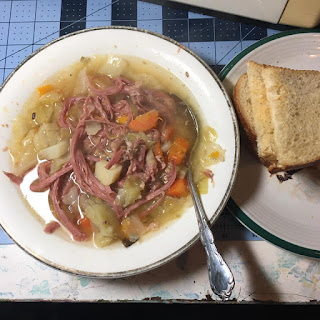 I started making it on the stove until I got to the part where it said to cook it for 3 hours. Uh yeah it was after 5 already. So we switched over to the Instant Pot directions lol. That took about 2 hours so a little better. The soup was good although I wish i would have cut the meat smaller and added more potatoes. I added some rice to the leftovers I took to work and that was good too. That's me always adding more carbs to things!

Starting to make a list of things I'd like to get from the store when I try to go next. Instead of bread I have things like FLOUR, YEAST etc. Going to have to go old school I'm afraid. Both of those items are not in stock on Amazon as of yesterday. I do have dog food and cat food being delivered from there today though! TG For Amazon. Their poor workers though. I hope they all stay healthy.