Wow it's almost 1:00 already! My boss worked all weekend so I had an inbox of stuff to do this morning. Woohoo for the work day going by quickly!

I just went out to mow in front of the "first day of school" tree in the yard. Does anyone else's mower look like this? Like why does all our stuff look like shit? Aren't we adults now? 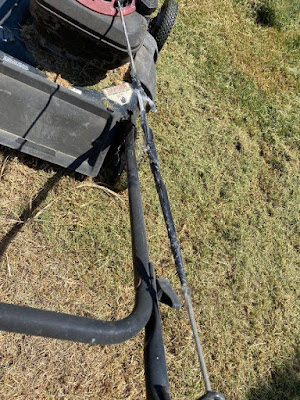 I used to do almost all the mowing back in the days when I didn't work. I haven't mowed in awhile. When it gets to the point where the mower has too many tricks I  usually go buy a new one. Might be about time with this one.

Trevor tried to mow on Friday but the mower was down at lets mow off the earth setting so it kept dying. The grass hasn't been mowed in "awhile" so that setting wasn't working too well haha. I told him just leave it I'll do it later. I asked Scott to raise it up and he said he'd teach Trevor how to do it. I don't think that actually happened since I just raised it up myself. Also the mower is almost out of gas so now I have to go find the gas can he thinks is in the garage.

At least I got the picture spot mowed so if all else fails that part is done. My yard looks like complete shit and really needs some TLC. I am going to try to work on it a little bit every day, even if it's just for a few minutes.

I got my letter turned in for next weekend's board meeting to request 1/3 of the lot next to us for the septic. They said the other lady turned in her letter to move her lot also. PROGRESS FINALLY! I called the septic guy on Friday and he said he was in the bank and would call me back but never did. What is wrong with people, doesn't anyone want to earn some money?

I made a shit ton of masks this weekend and told myself I am taking a week off from making them. I will take orders but tell them they will be a week out. They are so boring to make now, I want to play with fun stuff! 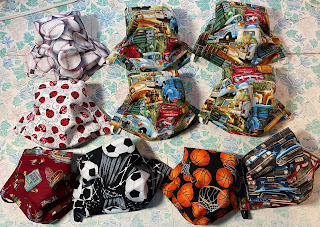 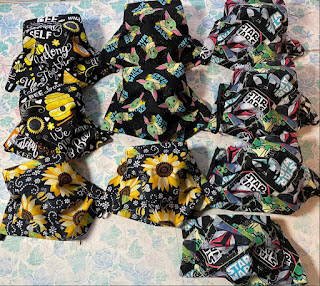 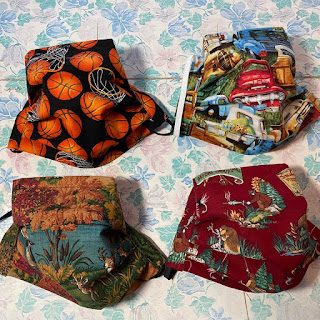 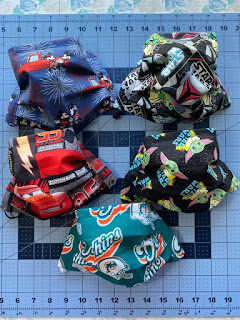 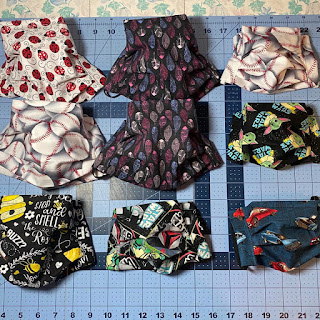 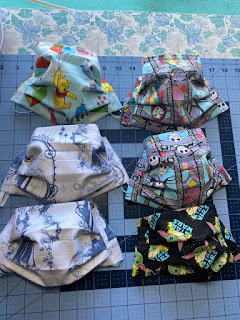 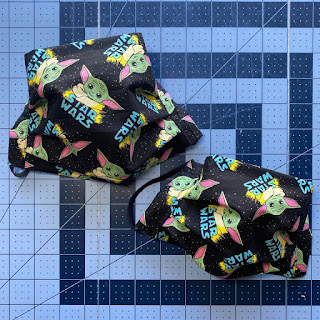 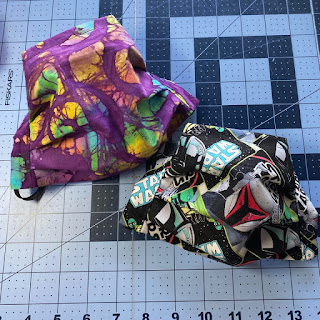 After I finally got all my orders done I did another green and yellow block for my scrappy quilt or whatever I'm making. 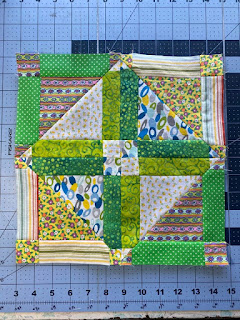 I'm thinking I'll mix up all the blocks so it won't be like well that one has too much green. After I got done with that I was sorting out scraps by color in my big box of scraps, Just about got that done. I am going to do some purple blocks next. 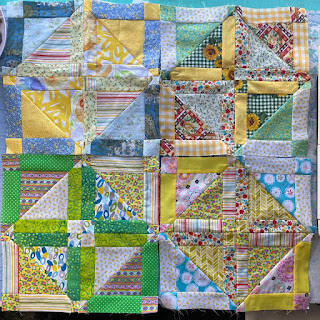 Scott spent the entire weekend making the trim around the windows. I'm not quite sure why it was so difficult other than it was really hot outside (especially if you wait until later in the day to get going and you wear all black and sweat pants but what do I know).  At least that part is done other than apparently hole patching and some paint. 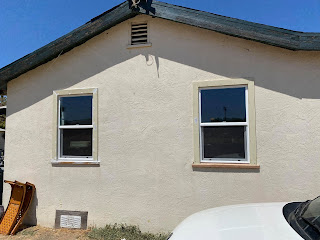 Saturday night I ordered fish & chips and it was so good. I got the family meal and we actually had leftovers. 9 huge pieces of fish, fries and hush puppies for 30 something dollars, not too bad for take out. We can spend that much at McD's for three of us. 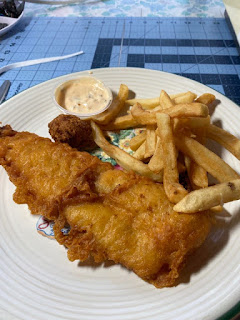 It's already time to get some more groceries. Last time I got Instacart and then ordered a bunch of veggies & fruit from a place that delivers out here. My friend was full for a couple days! I still have a bunch of the fruit and veggies so I might wait a few days to order from them again but I like that they do a flat of eggs.

Hope everyone has a great start to their week! Tomorrow is the last first day of school for my house (until the grandbaby goes!). It will be a distance first day so should be interesting but we are still going to take the first day of school picture to finish it off :)
Pin It
Posted by Julie H at 1:16 PM

You know I have never heard of instacart until your blog. Still not quite sure what it is. Like door dash?
Are you painting those frames around the window? They look very nice.
No, I don't have a lawnmower like this because I do not have a lawn. :-)

@Peg, yes it's grocery delivery. You order online, they shop and deliver! Totally worth it since I live 12 miles from town and hate shopping lol