I'm so glad it's a 3 day weekend. Today is actually a deadline day for work but I don't think we're making it lol.  I went to work yesterday and it took me until 2:00 to get one completed contract packet done. That was the whole reason I went into the office. Then we had to have a staff meeting and I had to waste time looking up stupid things like someone's phone number because no one else can figure out how to do that.  I ended up staying until 7, then picking up some pizza on the way home. 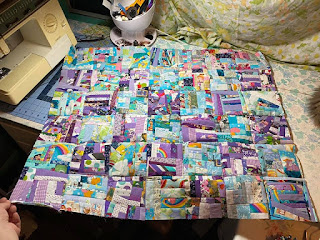 Last night was productive though! I got my little purple and aqua-ish crumb blocks sewn together. I decide to just make a little lap quilt/baby quilt size. I need to iron it still but here it is. 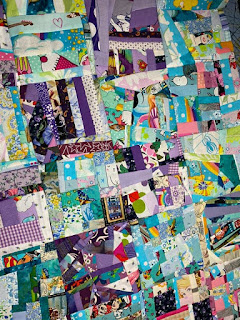 I think I will add a border or two. Need to figure out what fabric I want to use for that. I was also thinking I have a lot of 1 1/2" strips cut maybe I could join those together for a running border. oooo or maybe join them and do them on the diagonal. Hmmm decisions decisions. I kind of like that idea because it will use up more scraps lol 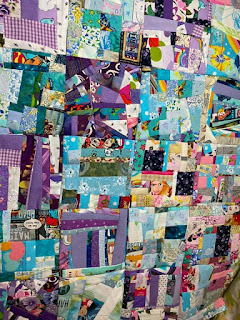 It's kind of an eye spy quilt even though I didn't set out to do that. 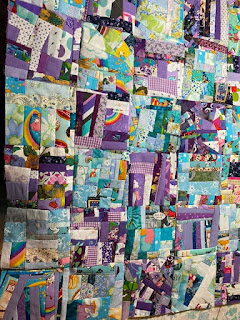 In other news Scott finally went to the dentist yesterday. He got one temporary crown. Apparently if that doesn't work then they will do a root canal. He seems to think it is fine now so we'll see if the temp crown makes it 3 weeks until he goes back to get it shaped up. He also needs another crown and two fillings. I told him he needs to just get it done so that he can eat steak. His dad hardly had any teeth left when he died and he always complained about steak being tough. Uh you think? lol His mom also has dentures and she constantly complains about things being hard to eat. 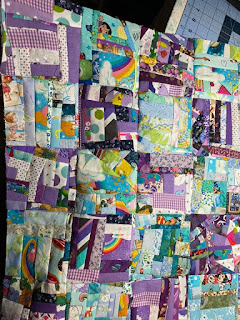 I also have a dentist appointment next Tuesday. I swear I always have issues all in the same area of my mouth. I don't know if it is just allergies or what. I think every tooth has a filling in that area now. We'll see what they say when I go in. Trevor and I were on a schedule for cleanings and then one day they cancelled our appointments while I was driving and I never got them rescheduled. I think it's been at least a year now. 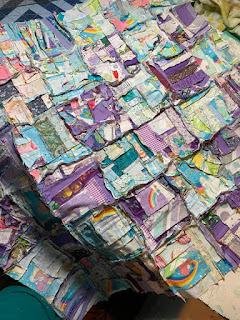 Since he was home yesterday he got more insulation put up, he's up to the AC electrical line. I wonder if he'll do that this weekend. We are supposed to have a couple more really hot days for Sunday and Monday. Too bad there are no bbq's and swim parties. At this rate I'm never going to see my nieces and nephews again.