Well I got about 1/2 a box of Holiday fabrics done before I ran out of boards. I ordered some more, they should be here Sunday. If I ever do craft shows again I have some cute stuff lol. If we're still wearing masks at Christmas time I guess I can use it for that too ;) 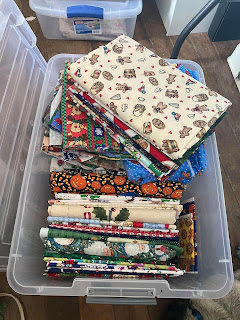 I finally got to work on my purple crumb scraps I've been trying to get to. Blocks are starting to take shape. It is so fun to see scraps that would have been garbage made into big fabric pieces again.  Plus it is really relaxing for some reason. 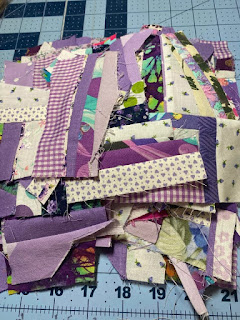 No walk last night, I didn't even cook dinner. I was starving at like 4 and had a bunch of snacks and then I wasn't hungry later lol.

Scott got the new outside light in and working. I think the only electrical he has left to do is to fix up the AC wire that comes into the house, it looks a bit rough. I think he was saying something about going under the house for that. I think he forgets he's not as small as he was before but he seems to think it won't be a problem. We'll see haha.

I really should go pour myself some coffee, I haven't even done that yet.

A couple of my neighbor friends are doing Sober September. One of my friends I would classify as an alcoholic so I'm finding it interesting that she is giving this a go. I hope she is successful. I'm more of a social drinker although I do like to have a Smirnoff Ice or something like that if I have them. Not like a whole pack a day, just one. Since the bar has been closed I've only had actual liquor a few times, usually with one of my friends. Oh and I did not say I was doing this "challenge" but I'll be watching and so far I'm still sober haha.

Ok off to do the one thing I have for work so far. I'm going into the office tomorrow so I'll definitely be busy then. Today might have a bit of side sewing ;)
Pin It
Posted by Julie H at 8:27 AM