Well it took me until 2:30 to get caught up on work today. Woohoo
So this weekend was mildly productive.  We are having Jessica's drive by baby shower next Saturday and she's like someone might want to use the bathroom.. and I'm like uh ok...
So we are going to just be in clean up mode for the living room remodel for now. Still need to texture. Scott spent like 5 hours fixing the cords for the TV. I'm pretty sure we got in a fight about it at one point but I'm not quite sure what we fought about exactly haha. 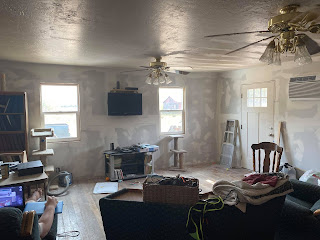 I took off the rest of the wallpaper border on the long wall in the kitchen. Just one short wall and a couple spots between the cabinets to go. Then I went to the Livermore Outlets with my friend to return some shoes. That was a nice break. I went into the Carter's store and bought a bunch of baby clothes for super cheap. So much fun. We got Coldstone on the way home. I don't really care for that place all that much and I remember why now. It was so sweet and then I was like in a sugar coma for the rest of the evening. Totally worthless just laying around.
Sunday I worked on the yard a bit. Finally got most of the grass out of the bricks and Scott got the one part leveled back out again so people won't kill themselves on it. I need to go back out and attack the bit of bermuda grass that is left in them that is sticking up. I hate using Round Up but I think I might hit it with some after the party. Daniel was supposed to come over and work on the yard today but I haven't seen him yet. I'm going to go to Home Depot after work and get a few things. I need some clippers since mine disappear every year and some gloves so I can trim my little rose bush back. Everything has that damn grass wrapped around it. I need to spend at least an hour a day out there. I miss working in the yard too, I don't know why I stopped before. Just got busy I guess. 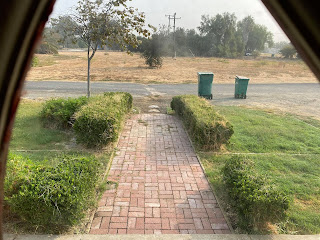 This morning the Septic Guy came over and decided I need even MORE of the lot next to me. The guy from the building committee was here and he said he'll just put in for it at the board meeting on Saturday for me and I won't have to do anything. They are going to start it next week. Anyone want to give me EIGHT THOUSAND DOLLARS?  At this point I'd just hand over my left boob to get done with this.
Late last night I decided to do some anti stress sewing since I have like 5000 other things I should be doing. I made up the red and yellow scraps I had into crumb blocks to put in with the black ones. I haven't tried laying them out together yet, we'll see if I like them or not. I didn't have much for yellow scraps since I had used them all for zip bags awhile back. Kind of forgot about that. My tote full of scraps is getting quite empty now, I can probably swap it out into a smaller box. 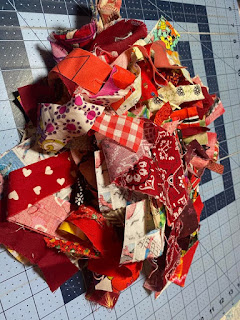 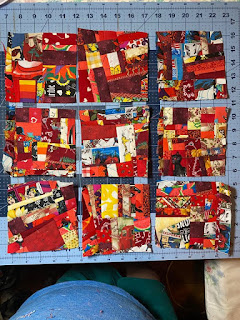 Oh I forgot last Friday I cleaned out our closet and took SEVEN bags of clothes (well one was blankets) to Goodwill. They make you dump them out into the bin when you drive up. That was super awkward.  But there is so much more room in our closet now. I cleaned out two drawers in my dresser too so that helped. I need to finish doing laundry and get everything hung up.
I had washed this teddy bear and threw it on the bed and look what I found when I came back. So stinking cute! 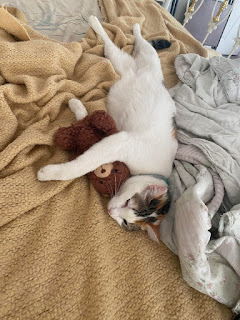 and then a few minutes later she was like this 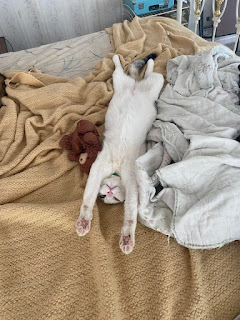 Buster thinks all my drinking glasses are his now. He's worse than a toddler. I was giving him his own little glass but then he started batting it and knocking it over. What a shit head. 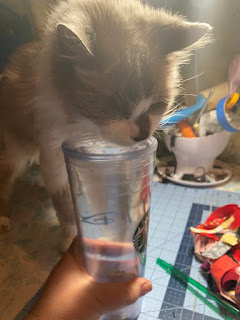 My mom just brought over the bassinet from when I was a baby. She used to pull it out for all the grandkids. WTH am I supposed to do with it? The cats will just sleep in it. I have like 0 storage room. Can't even donate things like that since I'm sure it has long since been recalled. Of course she'll probably look for it if she comes over too. Sigh.
Pin It
Posted by Julie H at 3:17 PM

Now the fun part - painting. I LOVE TO PAINT.
I don't even need no stinkin' painters tape - I'm that good. Only talent I have.
You supply me with dinner and I'll paint for you. :-)

@Peg lol we have a couple steps still before paint!