Hello Happy I Only Work Today And Then I'm On Vacation Day!

I am off tomorrow but we are leaving on Wednesday to go camping. Tomorrow will be pack and make potato and mac salad days.
I'm going to go grocery shopping after work today I think.
Friday I watched the little man for a couple hours. He was all chilling in his playpen while I vacuumed and checked for stuff for him to choke on. He is crawling all over now! 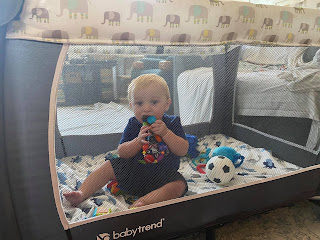 This picture cracks me up Tiger was like I'll have this size bottle please! After we get home from camping they will go to their new homes :( I will probably cry.  My friend is going to come take care of them while we are gone. 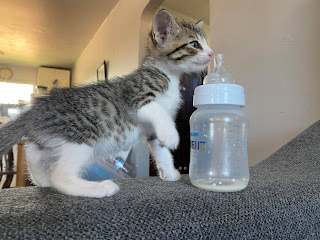 Friday night they had a simple spaghetti dinner in the kitchen at the club house and I made it just in time to get a plate. Everyone always raves about the woman that cooks so much of the club food but eh I don't really think it is that good lol.  Mostly picked the meat out and threw the rest away.
Afterwards I hung out in the bar! They did a pre-grand opening which sounds stupid but it was fun. Did some dancing which is the most I've moved since Covid became a thing. (PS That girl on the right with the bun is the one from the FB post the other day, that was a bit awkward but we both acted like nothing ever happened). 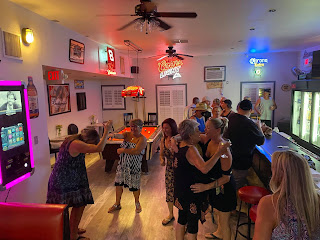 Saturday I played around in my sewing room and got an order for some mug rugs. I was out of the fusible fleece I use so darn I had to go to Joann's. I remembered to pick up some blue and pink threads too. I'm always out of those. 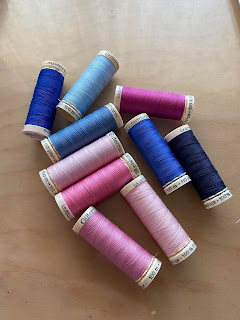 Here are the mug rugs, she wanted them bigger and "no borders". Well that is easy. I need to pack those up and get drop them in the mail today. I had 2 orders of my patchwork zip bags on Etsy too! One person bought 2 and another bought 6!  I always get happy that someone likes my funky stuff haha. 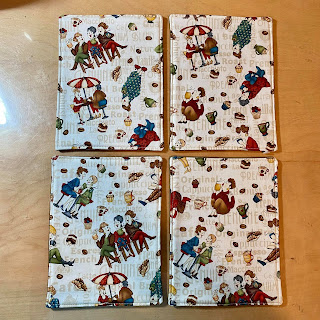 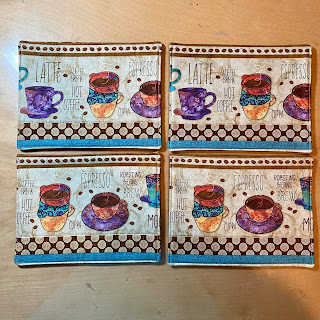 Sunday I woke up and remembered it was the voting day for the club! I went down and voted and hung out for them to get a quorum. Then we all came back at 2 to see who won and vote for officers. So a whole weekend of socializing with the neighbors. The dues increase bylaw passed so lets see what our club does with double the dues money.  Hopefully not just waste it on dumb shit. 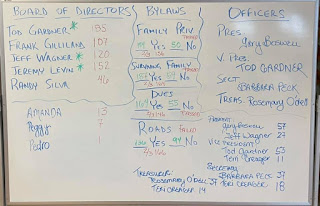 Sunday I printed out our camping list and went over it and then the boys and I went to Wal Mart and spent a shit ton of money haha. Oh but first we went and had an early dinner at La Villa our favorite little hole in the wall Mexican food place. I could go for another plate for lunch ;) 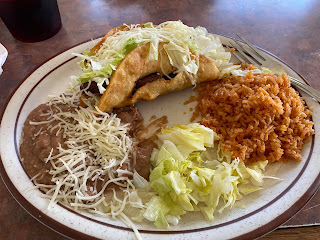 I had a ton of emails of new apps to put in the computer this morning for this stupid program they are making us do. I'm probably going to die when I open my email when I come back to work next week. I already did my time card and my away email message. Five hours to go haha.
Pin It
Posted by Julie H at 11:29 AM