Good morning happy Friday!! I get off work two hours early today since it is a holiday weekend. That is one thing that never happened with our previous President. Glad to see it is reinstated!

I went into work on Tuesday and Thursday. Finally got all the letters out and folders made for the new contracts around 1 yesterday. Dropped them in the mail box at the post office on my lunch. Then I came back in and made folders for all the new applications and still managed to leave work on time. Now I just need to print out payments that have been made the next time I go in. Always playing catch up when I go in the office.

We have a whole new program that they came up with that is supposed to be implemented this month and they keep having online trainings for it. I am "at" one at the moment but I left because I don't know what the heck they are talking about. It's like making the janitor sit in. I'm not a planner I'm basically just a secretary.

My two friends I email with every day are planning a boat trip on Monday and sending emails about it all and I wasn't invited so I'm over here like why are you emailing me too. Like have fun! Rude..

This morning I had to get up at 5:30 to feed the kittens because Scott and Trevor sounded like they were having a party getting ready for work and had them riled up. Of course they don't feed them so I had to get up. I went back to bed when I was done and hit the stop button instead of snooze on my alarm later so may have slept in a bit. 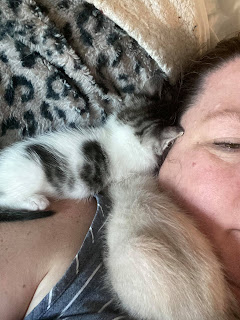 Speaking of kittens, they all have a home to go to! I'm so excited. I was hoping to get them all out the door before we go camping but it looks like we will do when we get back. They should all be eating food by the time we go camping and my friend Cassi said she will come take care of them. So far the little Siamese is the only one that wants nothing to do with the wet kitten food. I am going to have to see if there is a different flavor or something. It will be nice to not have to bottle feed anymore.

The baby gate is only good for keeping the dogs out while they eat now. Once they are gone though I'm still going to keep it up to keep the dogs out of the cat box. Dogs are disgusting.

I watched the baby for awhile Wednesday morning. It was pretty chaotic since we were having another one of those work trainings (totally couldn't pay attention to that), kittens and baby haha. And of course the dog wants to go out in the middle of everything.
He is only going to be able to go in this bouncer a time or two more. I think I might just give it away instead of storing it. I can just buy a new one if another baby comes along. 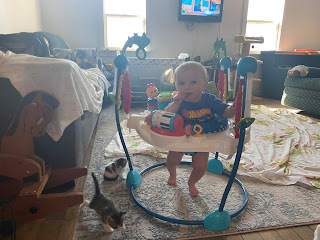 He is crawling now! I cleaned the floor really well and he still managed to get something in his mouth. Going to have to really clean well before he comes over. Which is good, less mess haha. 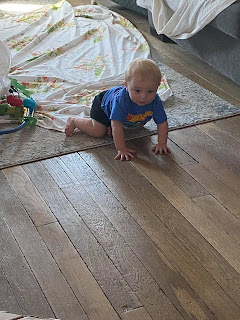 He ended up falling asleep on me without even having a bottle first. Just sat on my lap while I was trying to watch that teleconference and out he went. He slept there quite awhile until after his parents came to pick him up. 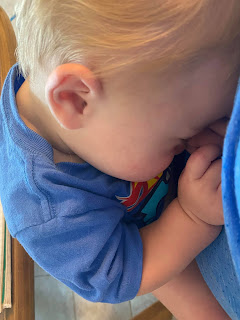 There is another batch of feral kittens in the back. Thank God they have a mother but it's a little sad because they are feral. There looks to be quite a few of them. I know there is some Siamese looking and at least one black one. That dad gets around.
I kind of want to get rid of the paddle boat since we don't take it out anymore. There is too much grass in our lake now. Plus I think the steering is messed up on it a little bit. I'm all about getting rid of crap lately. I took what was left off the free table to the hospice shop yesterday on my lunch. I did NOT go in and shop either, go me! I was glad they took everything. I still need to work on organizing the garage some more. There are a bunch of bins Scott tossed stuff in that can be sorted, lidded and put in the shed. The shed is a whole 'nother adventure of needing to be cleaned out. 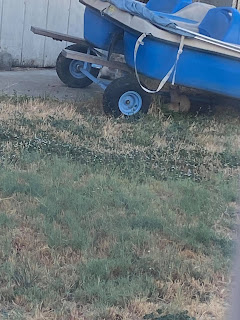 Doesn't this look fabulous? My lunch I took myself to yesterday. This is the restaurant I call the "hot plate" place haha. I think the put the plates in the oven before they bring it out. It's not the BEST food but it is so warm and comforting haha. I am destined to be a fat girl my whole life I think. 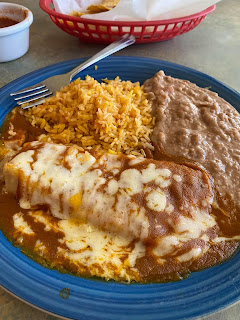 One day earlier in the week I cut my blue fabric scraps into 1.5" wide strips and sewed them together to do some string blocks with. I am going to wait to start those until after I make my friend some nautical mug rugs she ordered. Hopefully I can work on those this weekend. 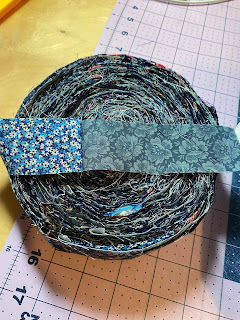 I was trying to get a picture of Snookie's lip that keeps getting stuck on her teeth. It cracks me up. Instead I just got a picture of my dog showing how old she is. Tears. She is about 10 now. Darn dogs why do they have to get old so fast. 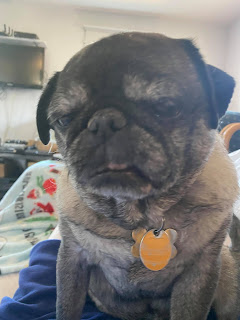 Tonight I'm going to dinner with an old friend which should be fun. Of course I haven't seen her since way before the pandemic started. Sunday is the 4th of July party at the club I got guilted into helping with so I'll be doing that for most of the day.  Should probably pick up some stuff for Scott to BBQ for dinner so I don't get yelled at like I did two years ago for not having anything planned. Joys of motherhood sometimes haha. I'll be glad when the 4th isn't on a weekend again so the club party won't be on the actual holiday. Works out better that way.
Ok back to work since my boss needs some stupid report crap. Have a good 4th of July if I don't come back to complain about something later ;)

Gosh you're busy with a lot.
I'm just busy preparing a house to sell and it's hell.
Have a wonderful 4th Julie!