Hello! Late Monday post today. I went to work and actually had stuff to do all day! How weird haha.
Sunday I spent most of they day sewing my scraps together. Ready to play with another day. 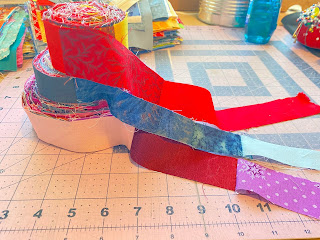 Got most of the "mixed Disney" cut up and matched up with some linings and zippers. 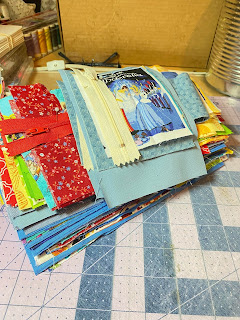 I got tired of playing with those so decided to work on a small bag of buttons to sew on cards.

Scott came over around 10 and stayed until about 9. Hope he left snacks for his mom sheesh.  I made carnitas in the crock pot and oh boy was it spicy. I was out of sour cream too. The lettuce and tomatoes helped a bit to calm it down. Super good though haha. 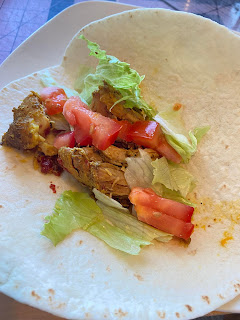 I went to bed pretty early and slept almost until my alarm went off so that was nice. I am teleworking on Tuesday and Thursday this week. Thursday is also my buddy Cassi's bday so we are going to go out to dinner I think! Not sure where yet though.
After work today I went to Costco to pick up my glasses that had cracked and to see about getting new lenses in the ones Simon chewed on.  $130 to get new lenses OR $100 to get new lenses with my insurance OR $170 to get 2 new pairs of glasses with my insurance and their promotion and keep the messed up pair as is. I went with the last one. I got one pair of the same frames that got messed up and then a new pair. Why not? It's August might as well use up that insurance I pay for and I wear glasses all day every day. I should have 12 pairs lol.
After Costco I ran into Joanns since it is in the same shopping center and got some more fusible fleece. AND had to buy this since my friend and other people love Jack & Sally. Showed it to her and she's like I'll take 3 keychains lol. They are just about the perfect size. 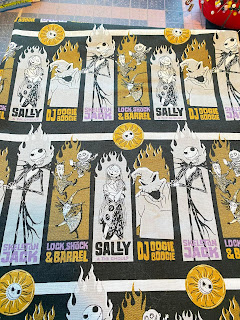 I got some wraps when I was at Costco and ate one in the car since I was starving. Then I got an iced coffee at McDonalds. The last 3 I've got have been horrible. I'm going to have to go back to Diet Coke (really wanted the frozen coke but they were out).  I don't know what happened but they went from being delicious to disgusting. They are a bit better after the ice melts a bit but not worth $3.
Jess came over a bit ago because she said Daniel keeps wanting to get in the car and leave their house lol. He came in, wanted the box with this Little People stuff in it open, played with it for a sec, took 2 people and was ready to go lol. I'm like hide those when he's done and bring them back...
She said he was mad when they got back home haha 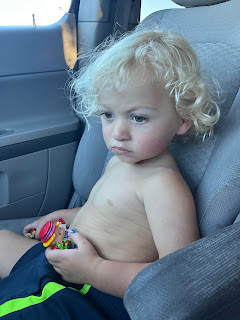 Stole this picture of Miss Lilly haha. She's been having all night ragers apparently. She looks like she's being punished lol. 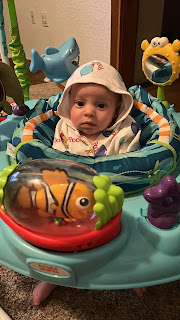 and here is the gross progression of almost getting my leg chopped off by the dog cable. So gross It's amazing how the body heals itself though. 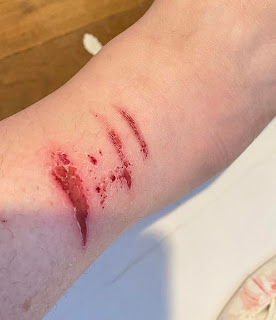 Ok it's almost 8pm and I haven't done anything productive in the sewing room, if I wait much longer I'm going to end up laying on my bed watching Tik Toks!
Pin It
Posted by Julie H at 7:53 PM