Good morning happy Friday eve. I drove my stupid self through the stupid fog to get to this stupid job where I don't do any stupid work here. Stupid! I'm half tempted to just not come in the office anyways. I don't work WITH anyone in the office and I'm not expected to get the counter or answer the phone so who is going to notice me missing?
Look how cute Tubz is in the baby bouncer thing 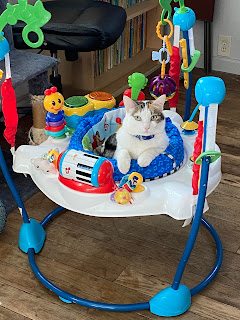 I had my meeting yesterday with 4 of the 5 DC's (they are like the boss of the office) and my new boss. All these small offices are like oh we usually just do that ourselves about almost everything I would usually do. I was like I told you I'm going to be bored lol. I flat out was like what am I supposed to be working on TODAY. So I'm going through the applications they have in the system to see what is missing (most are missing the most important part to even finish that up).  I got one office done and almost done with a 2nd.
After the meeting my boss called me right back and was like how are you doing and I went booohooooo so dumb I hate when I cry. Anyhow she was like we are Gen X that's why we cry lol. So stupid why do I cry when I'm angry? Anyhow that was nice of her to call me back and make sure I was ok. She said she had taken the job she has now so that she doesn't have to manage anyone and then they threw this on her. She said she's been having chest pains. Lovely.  Hopefully she doesn't go out sick and I get some other asshole to be my boss.
After "work" I cooked dinner for Trevor since he asked me so we ate that at 5pm before he went to bed and then I went and watched the kids at their house so their parents could go out to dinner.  Lilly was bouncing in this thing like crazy. So cute. Put a video on my FB but I'm too lazy to figure it out here. When she was done bouncing she had poop all up her back. So gross. I told Jess she owes me for that one. 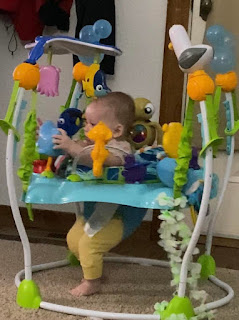 They put their puppy in the crate in the other room when they left but he was crying so I let him out for awhile. Then he was like beating us up so he went back in the crate and was actually quiet until they got home.
Daniel put himself in here. I was like are you stuck? He tipped it over and crawled out lol. 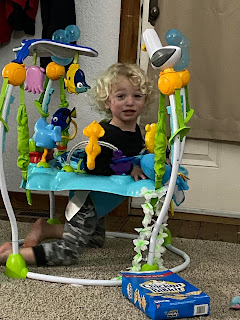 After they got back I went home and went to bed.
This morning I was cleaning up Simon pee in the kitchen and the bottom of the Clorox Clean Up fell off the nozzle and spilled all over the floor. My house smells clean now. Of course the mop had to decide to die while I was cleaning THAT up.  What a disaster.
Well on that note I guess I'll go work on stupid shit that no one cares about. I'm in the office so I can try to burn up this shredder some more. At least cleaning up these old files makes me feel like I'm being useful.
Oh today is my father in law's birthday. Sure miss going to see him on his birthday. :(
Pin It
Posted by Julie H at 8:59 AM

I'm so sorry about your job. Sucks to not enjoy what you are doing for money.
When you said the Clorox Clean was all over the floor but your house smells clean now. I had to laugh at that. I used to burn this candle I had because every time I did even my stepmother who always has a snide comment, would say, hey you just cleaned didn't you it smells so good and fresh in here. Well Julie you didn't have to tell me that twice. I had not cleaned and I then used that candle for that very reason!
That and a trick this woman I worked with used to make me howl. She would race home from work, throw an onion in the oven and turn it on. When her husband came home he assumed she had begun dinner. She said it worked like a charm.