Good morning happy Saturday! I finished up my mug rugs yesterday before darts. I have 3 sets of these plus more with smaller ones of the big one. I am going to give my mom one set and then put the rest in my booth for tomorrow. I just remembered that my tables are at Jessica's house so I will have to go get those sometime today. Scott and I are going to go Christmas shopping today and I also need to pick up some lights for my craft show tomorrow since it goes longer than the sun is out. Probably going to freeze my ass off but at least it isn't raining (hopefully, nothing is in the forecast). 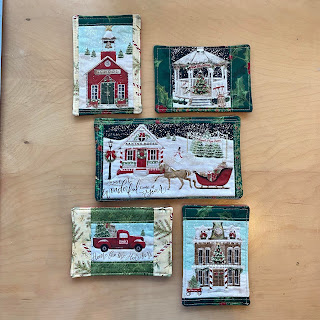 While I was finishing these up the dogs got in a brawl over a tuna can. I grabbed a plastic basket and had to smack them with it to get them to stop. Sheesh. Then later they are just fine. Stupid dogs. They are going to give me a heart attack yet.
I went to darts and the guy that is on my team that went to the UK for 2 weeks finally came back and brought us goodie bags. So we had some nice snacks while we played. My friend Dawn's boyfriend was on the team we were playing so I visited with her the whole time.  I won 1 regular game, got a Low Ton (score was like over 100 points) and then won the big game at the end for our team which was awesome.  Afterwards I talked to this gal Marie who could almost be my Grandma for awhile lol. She is a sweet woman who raised a bunch of family members kids but never had any of her own.
I was just looking for our cookie shopping list and I did save it on my blog before which is good. I did find the paper version too though. I was reading through some of my posts from last year while I was looking for it. It was just a little over a year ago when Jess got her gall bladder out while she was pregnant. That was scary. Glad the baby didn't end up with any problems from it.
Scott just got here and I still need to wash my hair and get dressed. He's going out to clean up the mess Simon made with the recycling the neighbor brought over and left on the porch for Jess. That was on my to do list -later- I'll do it later list haha. I just ordered her a shorter tie out cable so she'll stop getting wrapped up on my mom's trailer mess. She ripped up the screen yesterday I see. Trevor will have to buy her a new one I guess! I tried to barricade the area a little more until the cable gets here. I think it said it will be here tomorrow.
Ok wish us luck on Christmas shopping today. It is so hard to buy for adult kids who don't have anywhere to put anything.
Pin It
Posted by Julie H at 10:19 AM