So after I FINALLY got off the computer today (actually turned it off for awhile so I wouldn't be tempted to get on!) I cleaned up the kitchen a bit and washed some more clothes. I think one more day and I MIGHT have them all done!

Both of the girls had softball practice and I need a few things at the store so I told Trevor we were going to go to the store. Which made him want to find his wallet. In his room. Which has every toy he owns on the floor in there. After about 15 minutes of him whining that he needed help I went in there to help him find it. Started sorting all his crap into the right boxes, basically cleaning up when I came across one of his wallets (he has 2). So of course that was the end of the cleaning session (hey I have to pace myself here!).

Took the girls to softball practice. Well tried to anyways. Jessica thought she had practice at 4 and apparently most of the team thought they had practice but no one was there. So we called the coaches and basically one said ask the other one and the other one said no one showed up the day before so basically screw you all. Not exactly what he said but that was the message in there. (We didn't go because Jessica was kind of doing the drama thing and I really didn't want to drive to town anyways so we just skipped it). So anyways, Melissa's practice wasn't until 5. So we had like an hour.

Went by the vet and picked up some advantage so I can stop grossing out about my cat sleeping next to my head with fleas on her. This woman that was in there was so annoying. Her daughter who was about 9 or 10 was holding their dog, some kind of spaniel. She was telling her to sit and lay down but apparently the dog doesn't take her seriously. When the big brother stepped in and said it she did what he said. The sister gets mad because SHE'S in charge of the dog and brother actually gets a talking to by the mom for being too loud?? Obviously there is some kind of pecking order in that family and the brother was on the bottom but above the dog lol.

Anyhow, then went by to pick up some final Girl Scout paper work that I have to get filled out and turned in for the end of the year stuff. Glad this is my last year of having to do that.

And then we still had 1/2 an hour to wait! So went back to the school and just sat there until we saw some other parents. Dropped Melissa off and then went to Target.

Ahhh Target. I got my groceries I needed, Jessica got some bras and panties and Trevor picked out some Diego playdough. Oh and more hangers so I can finish putting away all those clothes lol. So $80 later we were out of there (plus Trevor's own $10 for the Diego Playdough toy).

Came home, made dinner (spaghetti) then after Scott got home I went for a walk with the dog. I was walking for awhile and caught up to this woman that we have always referred to as the "anorexic woman". She walks and walks and is soooo thin. Anyhow I ended up walking with her around all the lakes and talking to her. She is REALLY nice and I feel really bad that we have always been kind of negative about her when we see her. Just goes to show how we judge by how people look and how wrong that is. What a bad example I am! Anyhow, walked around all 3 lakes! That is 3 miles plus our house is another .5 a mile to the lake so about 4 miles! My legs are kind of sore on the insides of my thighs but other than that I did pretty good. Tabbie (the dog) is freaking exhausted. Probably shouldn't have taken her that far since she hasn't walked that much in a long time. Here she is: 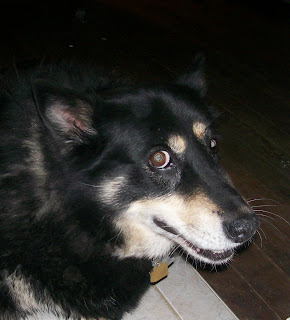 Her eyes look kind of funky since the flash was messing with them. Too dark in the house to not do flash.

So when I got back from my walk I was pretty tired and sitting in the recliner and Trevor's all up in my face with his gum bubbles hanging out. All of a sudden I realized HEY he just figured out how to blow a bubble!! He's so proud of himself! Kind of weird how he didn't say hey I figured it out but just kept showing me. Glad I noticed what he was doing!! So here he is, he's so freaking cute. 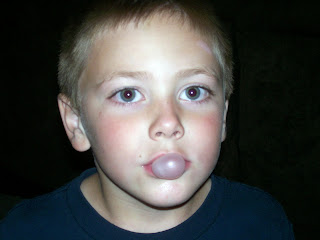 Did the dishes and now I'm sitting here, really not tired, I suspect that has something to do with the big walk I did not too long ago.Pin It
Posted by Julie H at 9:59 PM