WTF is up with the tooth fairy these days???

Tuesday afternoon the kids were beating on each other as usual. They were leaving me alone so I was just yelling out the usual "knock it off" and "quit hitting eachother", when I heard something weird going on. Jessica was apologizing to Trevor, that she didn't really "mean to" and so I had to get up to investigate. Trevor had his hand over his mouth and then when he pulled it away he had  tooth in his hand and lots of blood. ICK. He almost started to cry then his sister's reminded him that the tooth fairy would be visiting and he'd be getting a dollar! Eventually the bleeding stopped but look at his goofy grin now! 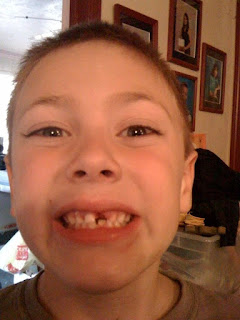 The sad part is that the stupid tooth fairy sucks rocks because she has forgot to come TWO NIGHTS in a row. WTF???

It might have a little something to do with hanging out with the elderly down at the club house playing bingo. (she won $2.50 this week!!) And maybe that little whiskey & coke that she had right before hand.

Or maybe that glass of wine she was having right before bed.

wonder if she pays a late fee?

Yeah- my 4 year old told me she can't wait because Grandma (my mom) told her the tooth fairy brings $20 bucks a tooth. Nice, mom. Nice.

You are so funny! It sucks being the youngest they get robbed! The tooth fairy has forgotten my kids man a night as well!

Yah I think the going rate i $5 for each night missed. tee hee

I hope she's been by now!

I love when the kids start to lose their teeth. Makes me automatically think of them growing up. Miah was having trouble with one of her teeth being loose but not loose enough to pull, she was working that tooth for days. Finally it came out and she was satisfied,
At this point, I don't want to be losing any teeth. NOT a good sign of growing up but growing OLDER...lol.