I can't believe it's already Melissa's last day of school. Ahhh pass the tissue. She's a reluctant grower-upper. She'd prefer to be in kindy taking naps and having snack time than being a grown up. She's planning on going to junior college in the fall. 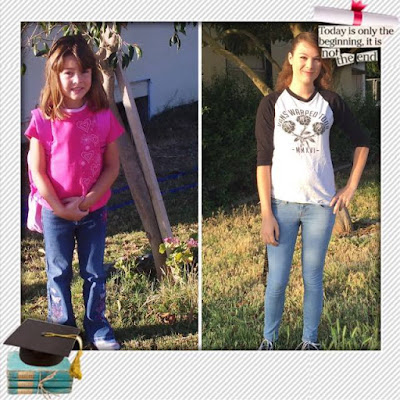 We are looking at getting another car so that she will have something to drive (newer car for me most likely, then she can have my older one).  Cars are so expensive. Even used cars are so expensive. Kind of hard to get a job without a car when you live 12 miles from anything. She's been looking at doing some nanny jobs which would be perfect for her.


I guess I should really get on with my lists for the party next weekend! I'm such a procrastinator sometimes. Either that or things just tend to really sneak up on me. Yeah that's it!


I think I'm going to do a photo montage of every year's first day of school. I purposely took the kids pics in front of the same tree every year (should have picked another direction though since every year they complained about the sun in their eyes haha). Pin It
Posted by Julie H at 5:00 PM