Another one bites the dust! 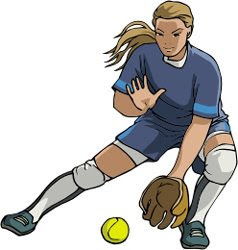 Well Jessica's team ALMOST won today. They did AWESOME!! The coaches on the other hand. OMG 4 times they had batters out of order. WTH?? They changed up their batting order AFTER they gave the line up to the other team. Stupid stupid!! Jessica hit an AWESOME home run. It just amazes me what my girl can do :tears:. She is such an all around awesome girl. After the game one of the other moms was telling me this travel ball coach really wants her to come play for his team so we MIGHT do that. We'll find out more on Wed when Melissa has her game since he is supposed to be out at the field then.

Also today her teacher sent me an email that she is going to get an award at school for doing such an awesome job on a report at school. She did a power point presentation to music (no, I have no idea HOW she knows how to do that), for extra credit.

Oh today I went and did some grocery shopping. Trevor wanted to spend some of his money so we went to Wal Mart where he got some stupid Batman toy lol. I got my nephew a scooter and a helmet so he'd have his own to ride around on when the kids are playing. I was more excited to give it to him than he was to get it I think lol. He really did like it though :O) They rode around the whole time Jessica was playing her game.

So we are down to two more games for Melissa and then the season will be over! Melissa's team is having a party on Saturday. I think Scott is in love with her coach (just kidding but he gets all excited to talk to the guy, it's freaking annoying to me!) so I'm sure we'll have to go. Maybe my scrapbook gal with have a crop so I can beg out...Pin It
Posted by Julie H at 8:52 PM

My kids have already been blowing my mind away with what they know on the computer. Makes me wonder if I should place parental controls on it before it's to late.