Well our slightly stressful weekend is finally over! My brother got married in Reno this weekend. While that in itself wasn't stressful we all had to get something to wear, finally found someone to take care of my dog, clean my house, etc. I really cleaned my ass off all day Friday! 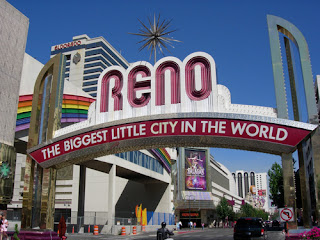 picture source
We went up to Reno on Friday evening after Melissa got home from science camp and took a shower. Poor kid hadn't been home a week and we were rushing her to get a shower and pack her stuff.  The kids actually did really well in the car, I thought for sure they'd want to kill eachother (which they saved for the ride home).

Everyone was getting hungry on the way up so I used the yelp app on my iPhone and scrolled through until we found something we wanted to eat, which just so happened to be Round Table. It was about a mile away from where we were on the freeway, which turned into a slight adventure since it was totally AWAY from the freeway.

We missed one turn and thought we could go up to the next street, but then there WAS no street. We finally figured out it was UNDER the road we were on. So weird! I'm sure I've talked about how my husband FLIPS OUT when he's driving and missed a turn/hits traffic/doesn't know where he is before. So yeah, that was lovely. It's like s switch goes off in his head and this maniac monster comes out. That's why I usually drive when we go to any place with big parking lots and things like 4th of July.

Eventually we got to the restaurant and our pizza was done since I had called ahead from the freeway. That was smart of us!! Glad my oldest thought of doing that. The pizza was great but we've decided we are definitly not in the "large" pizza catagory with our family of 5 anymore.  From now on we'll be getting the family size or a large and a small or something!

Before we left we looked up an easier route to get back to the freeway, it was only two turns and we were back our way. It was dark by then and after a couple hours of listening to classic rock on the radio I plugged in my iPhone, put my headphones on and listened to some music I actually like.

We finally got to the strip around 9, just in time for the kids to go to bed! Ha! It was super cute though since my nephew was already there he was calling me and asking me how much longer until we got there. He was so excited to hang out with his cousins!  My brother had arranged for usto have adjoining rooms for us and the kids. That's the first time I've had a room like that and it's totally the way to go! Although we USUALLY don't take the kids with us when we go on vacation unless it's camping or something.

After we got the kids situated we went down to hang out, which turned in to not much of us hanging out with everyone and us off by ourselves like usual. Seems to be the way it goes. They all like to play craps, well the guys, and the girls just stand around and look cute. As much fun as that sounds I like to do something too! Scott and I went over to the slot machines and played around a bit. I did see my mom and dad at one point but she went up to see the kids and went to bed right after I saw her. So much for coming up a day early for us all to hang out!

We did eventually all go to a little club setting. But then someone had to go to the bathroom and never came back,  my brother went to find and ATM and never came back, and eventually we were the last ones there so we finished our drinks and went and played around some more.We ended up staying up really late, I think we went upstairs at 3 am or some crazy time like that. We did totally enjoy our time together though, which was AWESOME :)

Well this is getting really long so I'll give you a teaser and finish out my weekend story telling tomorrow! 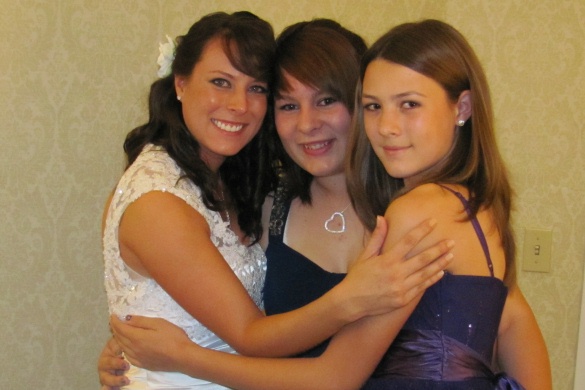 first cousins and now the bride is their aunt too haha﻿
Pin It
Posted by Julie H at 9:23 PM

The three of you girls look gorgeous!

Beautiful!!!!! Sometimes the craziest weekends are also to MOST FUN!!!!!!!!! Thanks for the teaser now finish the post - LOL!!!! HA HA

I hope it was a lovely wedding! I have a friend who was in a wedding in reno...and the photos were beautiful! Gotta love those reno mountains!