I'm pretty sure I've exceeded my calories for the week today. Like all of today. I'll spare you the details but I think I need to get rid of the Girl Scout cookies at work and clean out the crap in my house. And not go in ANYWHERE with food other than my kitchen. After I get rid of the cake, macaroons and left over Chinese food. I'm pretty sure I could easily join an over eaters anonymous meeting and fit right in.

I've just about made myself sick of myself.

Which, really could be a good thing since that is usually what gets me to stop being an asshole and eating everything that isn't nailed down.

In other news, Trevor had a pretty good birthday I think. After school we ran to the post office annex to pick up a birthday card that got mailed with postage due. We got there at 4:13. They close at 4:00. Anyone else think that's awfully early to close any type of business? I need to bribe the teenager to go pick it up for me after school.

Then we ran to Wal Mart and I bought him a new game for his DS. Something Pokemon. Not sure if it was black and white or white and black. Whatever it was he was all sorts of excited.

Yesterday he finally decided he was ready to get a hair cut since his hair was in his eyes and annoying him. So we stopped by Great Clips and he got a trim. 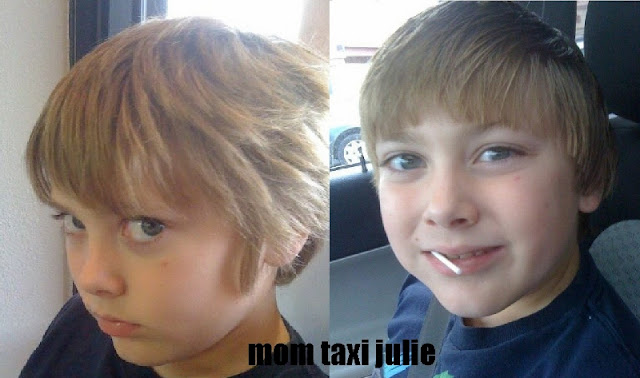 It's not fancy but at least it's a bit cleaned up and he doesn't have those large pieces hanging down in front of his ears. I was tempted to cut those while he was sleeping. Kidding. Kind of.

After Scott got home we all went to New China for dinner. It was good and we all came home with left overs. I was also reminded why we never ALL go out to eat. What a fortune!

After Melissa finished her book and Trevor's DS died we kind of had conversations. It was weird.

So in other non birthday news I had another item in a treasury today. It's an owl fabric panel that you can make three stuffed owls in.

The treasury is called "Rainy Day Crafts" and has some good vintage craft stuff. I love these little treasuries. Mine is on the bottom row, 2nd from the right. 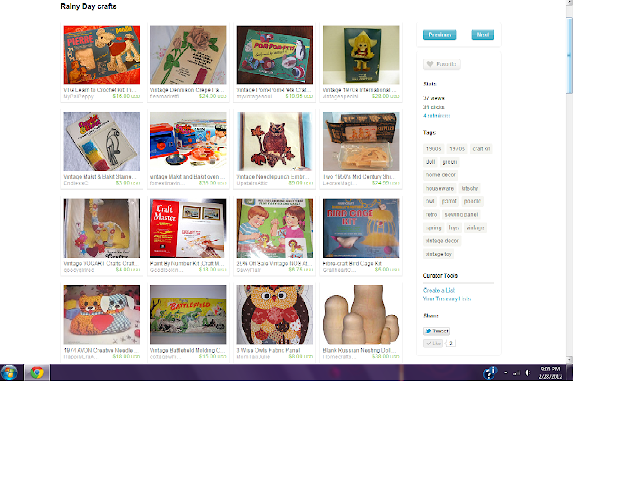 I didn't get anything new listed today but I did pick up some more stuff at the thrift store to sell. I'm almost on a first name basis with some of the people that work there now. I'm not an addict. Nope, not me.
Pin It
Posted by Julie H at 9:55 PM

He looks great after his haircut!

Wow that is some title.
Good work Julie.
I love left over chinese with my eggs in the morning. Nothing better than my left over crispy beef or general tso chicken with scrambled eggs. Mmmmm

You cannot put me anywhere NEAR girl scout cookies!!! There is not one single kind that I have any willpower over!!!!!
LOVE the haircut!!!