Sometimes I wish no one I knew knew about my blog still. It sure was great for getting things off my chest and working over things in my head. I'm starting to think of making another one and being a bit more secret about it. :)

Friday after I got off from work I decided that I'd had enough. I HAD to clean out the inside of my car. I thought about taking some pictures for blogging purposes but it was too gross! By the time I was done I had removed twenty plus water bottles. Yeah. I think I need to clean out my car a little more often. I scrubbed the seats down, vacuumed, and Armour alled the inside. I still need to wash the outside but the inside feels fantastic! So nice to have a clean car.

I got done just in time to get ready to go out with my two sister in laws and a few other gals. It's so nice to finally have sister in laws that like me. All six of us went out to the Elephant Bar. I've never been there before. I ordered a Mai Tai and the Hardwood Grilled Teriyaki Rice Bowl. Then I ordered another Mai Tai. My bill, with tip was almost $30, just for me. That was a lot of money to spend just on myself! The company was interesting. One girl, who I find absolutely hilarious, had us all laughing.  I couldn't help but notice another girl was trying to hide her horror of what the funny girl was saying. Definitely totally different types of people there! BUT everyone was nice to each other and we had a nice dinner.

After dinner we were trying to decide what we wanted to do. Eventually we ended up going to the liquor store and getting some booze and 3 of us went back to my one sister in laws house. I told them I was going to sleep on the couch since it was already ten thirty and I didn't want to have to drive home so late (and be sober). So we sat around and watched the end of a Harold and Kumar movie. I've never seen one of those and OH MY not for the faint of heart (or children under 30). Crazy!

I got up early Saturday morning (I never can sleep in at other people's houses!) and then drove home. I was home by 8. I crawled into bed and read and slept for a few hours. I didn't do much of anything important that day. Although I did get Trevor's birthday invites done and my veggie seeds planted.

Sunday I decided to tackle the laundry monster. I had it all done before I went to bed which is like a major accomplishment to me. I'm going to try really hard (I know I've said that before) to keep it up. Although I'm going to have to buy some more hangers or get rid of some clothes so they can all fit where they belong. 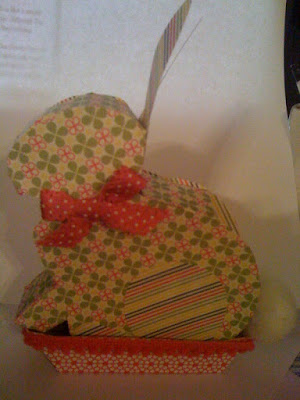 So Monday I had off work. Hubby had to work but the kids were all home. My step mom had invited me on my birthday to come over and craft and or scrapbook in her craft room. She made us lunch and a cake and then we played around with some paper. I made this cute bunny she had printed out the directions for. If it actually stays together for Easter it will be a miracle. I think I need to tackle it with a glue stick so everything is sticking together better.

I brought Trevor with me so he could hang out with my step brother's son who lives with my dad and step mom part time. He is 14 and they hung out for awhile. I thought maybe they would play video games together or something but they just seemed to play them separately. Kids are weird.

I ran to the grocery store afterwards since we had about one egg and a bottle of ketchup left in the fridge. I was trying to make it until Tuesday to go to the grocery store but had to give in. We needed something for dinner and lunch stuff. Tacos it was. Um delicious. I could eat Mexican food every day.

Well tomorrow is back to the grind. Four day work weeks are much better than five. My youngsters have Friday off too so only three days for them. It's like a mini vacation.Pin It
Posted by Julie H at 8:18 PM

This is why Julie no one knows how to find my blog. I have one sister who reads it. But she's cool. No one else knows. I like it that way. How can I bitch about you if you are reading me bitch about you?
:-)