It's All Her Fault

I made it through the day at work today but just barely. I had to go outside at one point because I had this stupid tickle in my throat and couldn't stop coughing. So annoying.

Just about everyone at work is sick or has been sick so I'm pretty sure that's where this horrible shit came from. I'm blaming Typhoid Mary aka Berkeley Mom who was so sick and kept coming to work. Took her a week of hacking all over everyone to finally take some days off of work.

I asked my boss if I could telework tomorrow and she said ok so HAPPY DANCE. I won't have to worry about coughing on anyone (pretty much out of sick days.) Too bad we can only do that once a week or pay period I can't remember which one (thanks to the cheeto administration for that one). I've only done it a partial day a couple times when our internet at work was whack.

When I got home from work I just wanted to lay on my bed and relax but kept having a coughing fit. I think I've pulled something in my stomach area from coughing so much. So I'd cough, be in pain and pee my pants. It's great getting older I tell ya.

I had Scott pick me up some more cough syrup on the way home from work and now my eyes are half mast. I also broke out my inhaler  which haha expired FOUR YEARS AGO. Probably should have got a new script for that on Saturday. I'll be surprised if I don't end up back at the doctor's office before the week is out though so there's always another chance..

Anyhow, the only thing I accomplished other than spreading my germs at work and doing all the work I missed in 3 days in 8 hours was cook dinner tonight.

I need to work on my picture taking game, I moved my good light into the craft room lol. Obviously I'm not working on trying to lose weight yet. My mom's birthday is January 14th and screws up my diet every year. Why even bother until after that lol. My only goal for now is to actually eat some real food I cooked instead of fast food.

So tonight we had One Pot American Goulash (made with ground turkey instead of ground beef). It is good but too spicy. I knew better than to put so much red pepper flakes but I didn't listen to myself. I ended up adding some sour cream to mine so mellow it out a bit. It took an almost an hour to cook so while that was simmering I decided to make some Cheddar Biscuits. They were good but I should probably go take a Zantac now. Wait let me get my cane.. 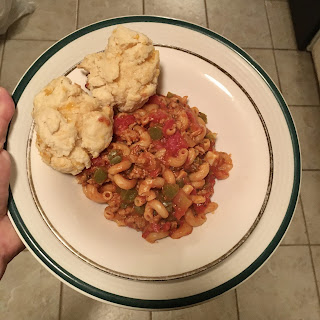 Ok off to try and lay down again and read a few blogs. If I start coughing I'm just going to sleep at the kitchen table.