I don't think I've ever spent so much time laying in bed. Tomorrow I need to drag myself to work though. 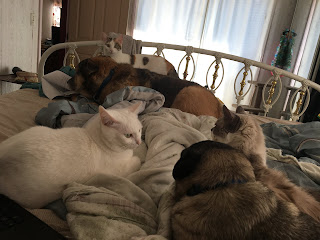 I live in a zoo, all the babies but Tina comforting me haha

Sunday our washing machine died so I had to get myself together enough to go with Scott to buy a new washer. First we went to Home Depot. They had a couple we liked but none in stock. The girl working said she couldn't see online or check by calling the other stores to see if they had them. This is why people buy items online. Why would I come into the store to talk to someone who can't help me? The only plus was being able to touch the machine and lift the lids. She said the soonest we'd get it was Thursday. I could order it online and have it in 2 days.

Next we went to Lowe's because Scott said it showed online that they had one in stock. So we went there and bought a washer. Nothing exciting, I'm old fashioned and want the top loading with an agitator. The new one is a bit bigger than the old one (that wasn't that old) so that is nice. Although I haven't used it yet because I came home and went back to bed.

I ended up binge watching Spinning Out all evening and then this morning I finished it off. Great show and I can't wait for the next season to come out.
After watching that I didn't want to comit to another series yet so I watched/slept through/rewound (not really but had to go back lol) A Family Man (horrible movie although Peg will watch it for her BF), Young Adult (stupid) and Up In the Air (mostly stupid).  Funny now that I look those up they are all pretty old movies I had never heard of.

I actually dragged myself out of bed to make dinner tonight. I made a menu and shopping list yesterday and Scott did the shopping.

Tonight we had Chili & Cornbread from Budged Bytes. I didn't check my cornbread and it got really dark. So weird. It was perfectly fine inside though. I also added about a pound of ground turkey. If I make this again I'll either cut the cornbread in half or add more tomato mixture since the cornbread ended up taking over. I stupidly grabbed the skillet handle after I had it sitting on the stove for a bit. Usually I put the hot pad on there but hadn't done that. Luckily I didn't burn my hand enough for any blisters. 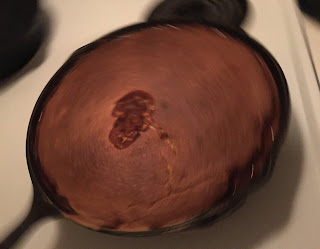 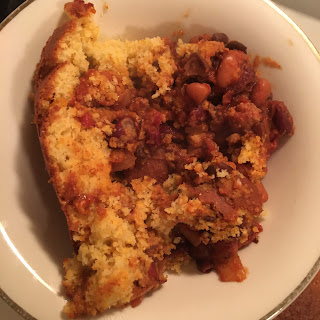 Last but not least in my exiting day,
I needed to pack this stuff up that I sold and get the shipping labels put on. 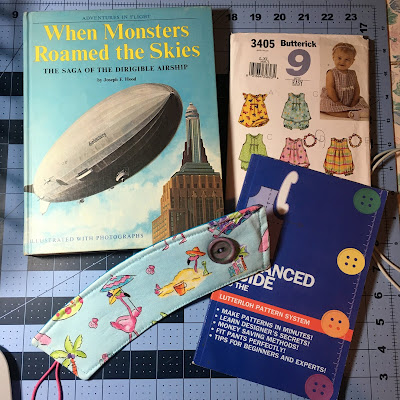 So I sold about $40 of items while I was laying around the last 2 days. Not too shabby for minimal effort haha.

I've been coughing a lot less today so lets hope the big huge coughing/gagging sessions are over. Hoping I have enough work for me when I get to work tomorrow that I can bring home and telework 1/2 a day or the next.

I have never seen my boyfriend in FAmily LIfe. I don't normally like his movies. Bad Me.
Rick is coughing and is congested and is miserable. He began this while in CA. By last night he was a hot mess. I hope this passes soon for both of you!!.
I love cornbread and chili. To me it looks good but I understand what your issue was here.
I make a mean GF cornbread that no one knows is GF. A friend asked for the recipe and about died when she knew it was GF. Boxed Cornbread has wheat flour. But cornbread with just cornmeal is even better.
Hope you feel better soon!

@Peg, everyone here has this gungarot. I hope he gets better and you don't get it! I usually use cornmeal (did for this one-Bob's) but then added some flour lol.