Well yesterday was interesting to say the least. I was always under the impression that if you tried to break into the white house they killed you first and asked questions later. I guess that doesn't happen when you're wearing a Rump hat.
I watched quite a bit of the live streaming last night. I have never watched them confirming the electoral votes. That was quite interesting. I think many of the people that stood up and talked about how disgusted they were with it all were amazing. And that was both Democrats and Republicans. It was like a ceremonial wiping of their hands and brushing off the Rump dust.
In other news, how cute are Tina's squished up toes lol. She's so funny always squishing into containers and boxes 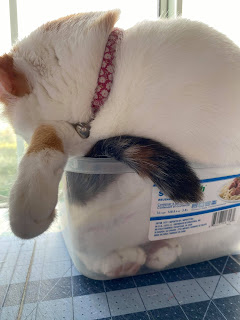 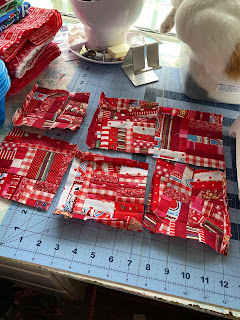 and made my friend some snowflake mug rugs. Seems funny in the West Coast "snow" is just for Christmas haha but she lives on the East Coast so it is "winter". 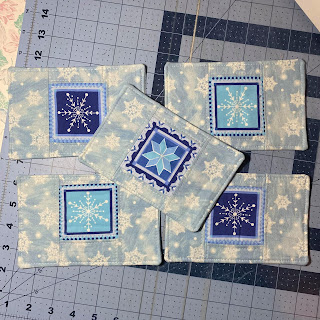 Another friend asked me to make a couple all black so she can put something on them with her new Cricut so I'll probably do that next. Then I had someone ask for 2 black and white check mug cozies so that is on the list.
Scott came home from work sick yesterday. Runny/stuffy nose and coughing. Of course he "just has a cold" and insisted that he HAD to go to work today. Also came to bed last night to so I'm sure I'll have whatever he has soon if I don't have it already. JOY. Let's all hope it really is "just a cold".
Pin It
Posted by Julie H at 9:44 AM

He gets sick a lot doesn't he? But he always refuses to get medication or see a doctor. It's a male gene I swear Julie!

The first woman who stormed in got shot and killed btw. The other deaths were medical-related deaths (heart attack etc)

@Peg he seems prone to weird stuff. Usually he gets sick after me for colds and stuff but I haven't went anywhere lol