Well I've started my morning off by drinking a huge glass of water and some Emergen-C. I feel like I'm on the verge of getting sick but that could also be my brain psyching myself out. Lets hope it's just the brain.

Last night I put in an Instacart order to be delivered between 7 and 9 this morning and when I woke up at 6:15 I had a bunch of messages from the shopper. Sheesh someone is up early working! Good for him and now I have some more groceries. I just didn't expect that to come so early.

Yesterday after work I made Scott 2 new masks, my friend 2 blank black mug rugs that she is going to put something on with her Cricut and then 2 mug cozies for a neighbor. I only took a picture of the mug cozies since the rest were boring lol.

This was the first time making mug cozies on my new sewing machine. The old one I used markings on the sewing foot a lot for distance. It's weird using a new machine. Also I always used the button foot to sew on my buttons and I don't think the new machine has one. I ended up just using the zig zag foot to sew on the buttons but I'm going to see if there is an actual button foot I can buy. 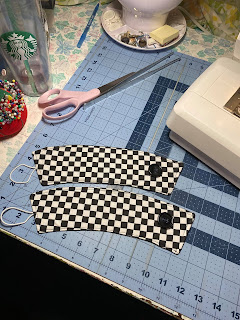 After I got those done I worked on cutting out some more mug cozy backs to go with some I already had cut out and I am going to cut out a few more Valentine's ones.
I stole this picture from Jessica, it is so adorable! The baby is 3 months old today. She said he is going to get more shots today :( 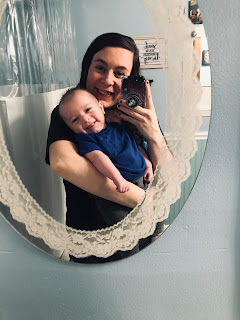 I watched this show over the last couple days. I only half assed watched parts of it while I was sewing but it was interesting and kind of good lol. 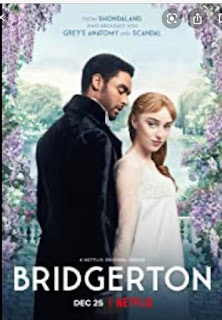 Now to find something else to watch. Tomorrow they are having a drive by baby shower for my sister in law but I don't think I'm going to go since we have someone sick here. Just in case, don't want to get anyone else sick.
Pin It
Posted by Julie H at 8:05 AM