Good morning! TGIF! As I was making dinner last night I realized I probably won't cook dinner again until Tuesday. I can live with that haha.
I woke up once last night to the sound of the dogs getting in the garbage. I usually put it up on the counter before I go to bed but apparently I forgot.
I woke up this morning to Rusty starting to throw up while he was on the bed so he has learned his lesson for today to not eat the garbage. Glad I got him off the bed before he barfed!
Here is Tina modeling one of the 2 denim quilt tops I finished last night. I had them sewn together but it was too long and skinny so I might try to reconfigure one to attach to the other (later). I was kind of wanting these to be bigger. 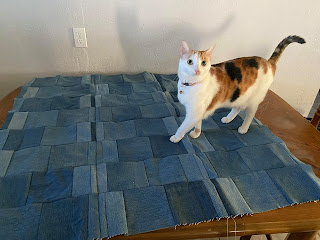 When I was done with that I cut up what I had left of loose pieces into 1" strips and sewed them together so I can make more of the strip quilt blocks. I like sewing like that so much better. 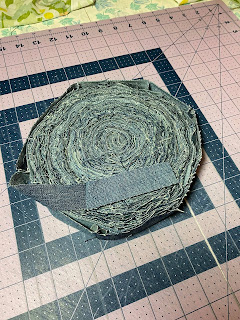 Glad I'm almost done with the denim stuff it is boring to work with. Almost all the same color. I think I want to do some kind of blue flannel on the back.
I started watching Firefly Lane last night thinking it was just a movie but it is a series on Netflix. So of course I stayed up way too late watching it. I'll probably have to figure out where I was dozing and rewatch those parts. I don't really like the way they have it bouncing all back and forth in time. Would it be so hard to just start at the beginning and go from there? I read the book a long time ago but I'm assuming the book bounced back and forth too. I can't really remember other than I didn't like the sequel because it was super depressing.
I got all my work letters written yesterday (and redid someone because people are interpreting that new form directions differently). I am hoping my boss doesn't have time to sign them today so I don't have to go into the office. We have a meeting with the other department to talk to them at 10 (over Teams). I got told by someone again yesterday that we are just to give the customer the forms and not help them fill them out so I still think that is hilarious. So far I got one back and I'm pretty sure it is filled out all wrong. Not my problem apparently haha.
My mom is going to pick us up some dinner and bring it over tonight. There is a little bar/restaurant down the road called the Banta Inn (it is supposedly haunted) and they keep advertising clam chowder. I was talking to my mom the other day and she said she'd been craving clam chowder and I was like hey they have it down the road. They have prime rib too but after I saw the price ($28 for smaller cut) I was like uh no I don't need that. Waiting to see what they put up for their specials today to figure out what we want to eat.
Scott should be on his way to Texas now. I didn't get any texts of him being flustered so hopefully he made it there and on the plane! Knowing him he'll put his phone on airplane mode and then never take it back off.
Ok off to do something productive (or not). Have a good day and weekend if I don't get back.
Pin It
Posted by Julie H at 8:44 AM