I was a good girl yesterday and finally put away some clean clothes that I had been ignoring, did some laundry (more to do today), had Jessica be my personal grocery shopper, went for a walk, made dinner and did all the dishes! Then I went to bed early lol. Of course then I woke up at 3am until like 4:30am but did fall back to sleep later.

I actually made a menu for meals again with recipes so that I will actually want to cook. It is a lot more fun to do it that way then be like ugh it's 5:00 what am I going to make for dinner.

Last night I tried this recipe for Garlic and Paprika Chicken mine didn't look like the picture but it was still good. I always take the skin off the chicken since that is how I grew up and it seems so gross to leave it on now. Originally I got this recipe from another page but they said the recipe was from Jo Cooks. The recipe I used left out the part about cooking it partially on the stove first. Maybe that's why the picture looks so much different! 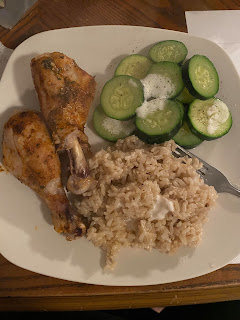 For my walk Trevor went with me and we walked the dogs around the block then went and met my friend Cassi. Its nice having other people to walk with, makes the time go by faster. Part of the time here is when my neighbor brought me some eggs on my way back from taking the dogs and I was standing there talking to him so not quite as long as it says on there. 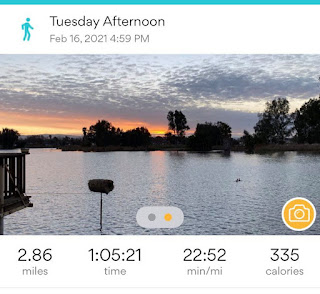 I was going to throw this box away and then I was like well I should put it out for the cats to play in first. Tubby LOVES boxes. Didn't take long. 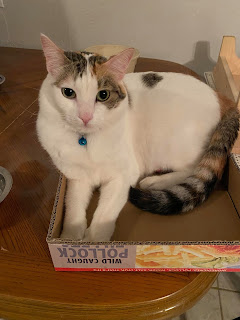 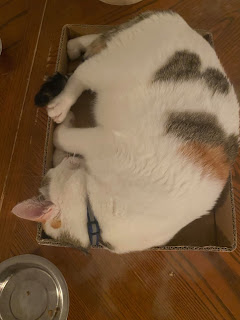 Later today I have an appointment to take Buster in for his last car ride :( Poor guy is just peeing everywhere and cries a lot now. He has lost so much weight too. Of course now 2 out of 3 kids are trying to talk me out of it which makes it even harder. Cry cry cry.  Melissa is going to go with me since they only allow 2 in. IDK if the other 2 will come along for the ride or not. I feel like I should have just took him and not said anything to them but it is what it is.
I don't have much pressing "work" to do today so we'll see what I can find to keep myself busy.
Hope you all have a great day!
Pin It
Posted by Julie H at 9:15 AM

Okay first off I'm the gal who sees its 5 o'clock and I say to anyone and everyone, what the hell am i gonna make for dinner? It will be on my tombstone I swear to God. I should do what you do but I think I'm too lazy or maybe I just like to bitch...tee hee.
I'm sorry about your cat. I don't wanna go where you're going, so my pet has to live forever.

So sorry to hear about Buster. Such a hard thing to do. My daughter just lost her 16 year old Morkie. They had a paw print done and purchased a nice photo frame of the dog. I also was going to do a pillow with some photos on Shutterfly of her dog. It's a nice way to remember them forever.