Hello Good Morning! I had to look and see what day it is haha. Yes it is Thursday. I've been trying to remember if Trevor went to work yesterday (he did).
Jessica finally got sprung from the hospital around 4 yesterday. She was there almost all day and all they did for her was a Tylenol at 8am. They refused to release her until some doctor signed off which is what took the entire day. I swear they did that just to charge for a longer stay.
Not too long before I left to get her I went outside to bring in my craft show tent I had put on the porch for a minute and two dogs were in my yard. They both had tags on them so I got them tied to my tree and called. The man that answered said he was in the hospital and he'd send Pat over. After a little bit I called him and was like where do you live I'll just take them home. He was like oh it's ok he's on his way. So my neighbor Pat came over and got them. He told me they belong to Larry who we refer to as the "Castle House". He made his garage look like a Castle (kind of) and was trying to do it to his house too but the club won't let him build it the way he wants because his plan goes too far out on the property line. ANYHOW, how cute are these dogs! The blonde one is most definitely part husky with the blue eyes and pretty young. 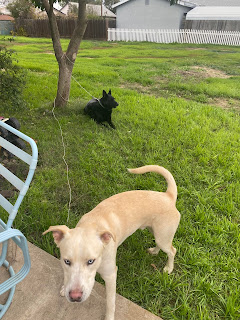 I went in the house for a sec and he jumped up on the table! What a goof ball. I bet he's a handful but he was so fun. 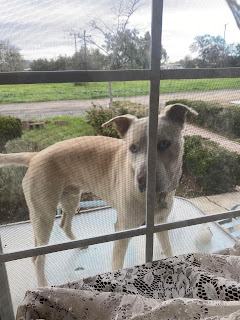 After I took Jess home and she got to see the baby for a little bit I brought him back to my house. I warmed up some taquitos and steamed up a veggie medley. He fed most of the taquitos to the dogs. They love it when he's here haha. 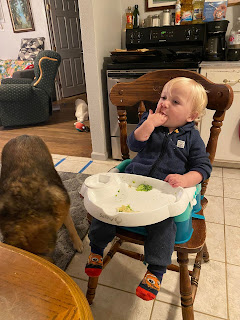 He's played with this toy quite a bit 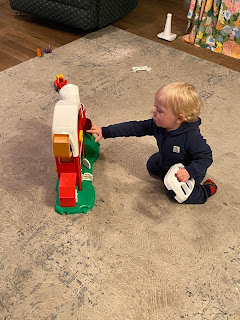 I brought his blanket with me and Snookie rubbed her face all over it. She's such a weirdo. 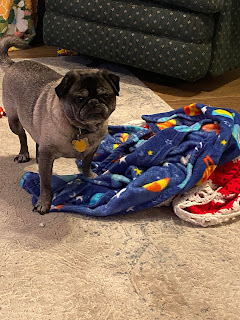 He fell asleep for a bit and then I took him home around 9:30. His dad was home for the night so he could take care of him while mom rested (hopefully). 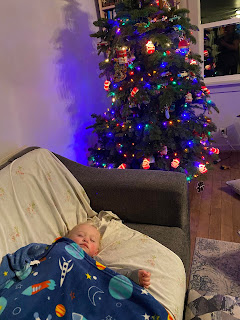 I actually did some sewing. I started off to work on some sports keychains which ended up with me going through my bag of black scraps and trimming them up and playing around a bit. I have to go to Joanns and get some black fabric and interfacing before I can finish them up. All the fabric I have and I have no black fabric left. I'm pretty much caught up on work now just back to the boring going through files part. I need to vacuum and wash my bedding today. I'm sure the little one will end up over here at some point.
It rained all night last night and it is pretty cold for "our cold" lol. Today is the last day it's supposed to rain until next week. I keep checking the weather for Saturday since I have a show outside!
Lets all pray today is calm :)
Pin It
Posted by Julie H at 9:54 AM