Good morning Happy Thursday!
I finally got an email from the gal running this craft fair. It has been the most unorganized one in awhile. No communication and apparently we have an hour to set up before it starts. I'm going to get there a bit earlier in hopes that someone will be there. It is hard to get set up by myself in an hour. I have a ton of stuff too since all I do is sew haha.

Yesterday after work I went out in the shed to look for the Christmas stuff, mainly the Christmas tree stand. I didn't find the stand but kind of pulled out a bunch of stuff towards the front to put on a free table. I brought in the Christmas boxes I found and accidentally brought in the one with my Precious Moments that I have packed away. I was looking at the label I had on there and it said Kitchen Nick Knacks too and I was like wtf is that lol. So I unwrapped everything and found these. I asked the kids if they wanted any of them and Jess just wanted the little baby so everything else will go on my free table. I used to have a cabinet in the kitchen that I would decorate for the holidays (it's in the garage now but I'm eventually going to ask Scott to bring it back in the house when he's in a good mood haha). I had all the teapots up on top. Who wants to dust that stuff all the time? Not me! 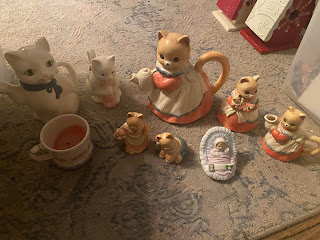 I got excited when I found a bag that said Scott's baby clothes, I've misplaced his tiger shirt he had. Sadly it wasn't in there just this puppy jacket. The baby is probably too big for it already and it is really tired lol. I'm going to wash it and see if it makes it though. 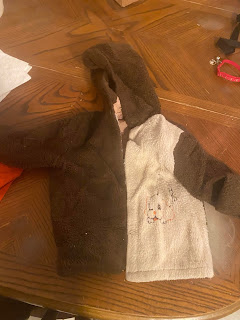 I found these pictures out there too. They had $1 stickers on them so I must have bought them somewhere. No idea, I totally can't remember. They are pencil drawings. I took them apart and cleaned up the frames and glass. May or may not keep them. Haven't decided yet. 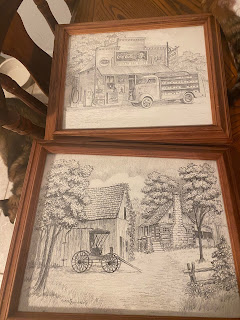 I had to stop working in the shed when it got too dark to see. Scott went out there after he got home and got the tree stand out. From where I have no idea. Probably half buried under his car crap. He brought it in the house but didn't put the tree in it so that was helpful. I guess I'll either do that myself or get Trevor to help with that.
I got these coasters done last night, I love how these turned out. This was another one of those "the print was too big" for mug cozies but they made cute coasters. 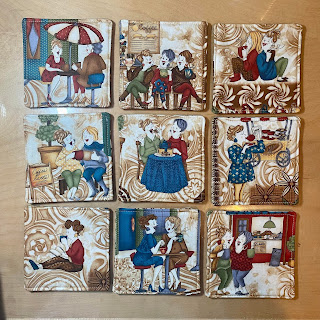 I have a ton of these ones, love the cat coffee fabric. 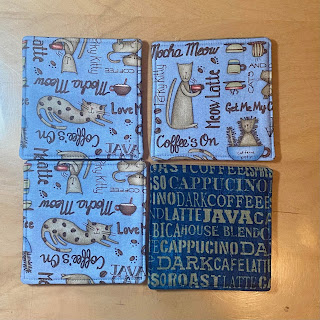 I did so much yesterday. My arms are so sore from cleaning the floor right inside Trevor's room. There was something stuck to the floor (turns out it was ancient gum, kids are fun) and while I was at it I got some of the paint off the floor right there.
Got a bunch of laundry done, need to go out and get that going again today.
I pulled my craft show stuff out of the shed and put it in the garage so I can get to it easier when it is time to load up.
Oh and I cooked my 3rd turkey of the season. I'm two turkey sandwiches in. It was such a small turkey it was done cooking in two hours. Trevor took off with the drumsticks and the rest fit in two smaller containers when I took it off the bones. Won't take long to eat that up.
I guess I should probably start looking for some Christmas presents. Sooo many nieces and nephews now lol. The older kids I'll probably just give money or gift cards to.
I've been spending the morning downloading someone's files they sent me in a weird format. It is taking forever. It rained a little bit last night or this morning. Hoping it doesn't rain on me on Saturday. I wish it was inside!
Pin It
Posted by Julie H at 9:28 AM