Good morning, happy Monday! I am working from home today, nothing pressing to go into the office for. Since I went to work on Friday my work computer was dumb lost all it's charge again. So I have to take it off the dock that connects it to the big monitors and charge it the old way. I don't know why it suddenly won't charge up on the dock anymore. The laptop screen is so small. Too small for when I just woke up haha.
Trevor is eating his soup he made from scratch for breakfast lol. He asked me if I wanted some but I declined this early.
Yesterday we played with this cutie. He was running all around having a great time then fussed a tiny bit so I put him next to me on the couch and he was out sleeping. 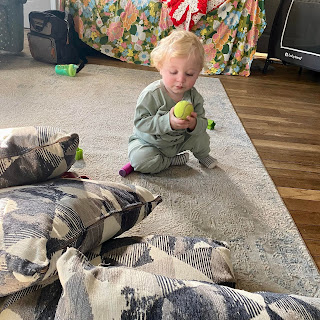 I went back into the sewing room while he was out and I guess he woke up a bit so Scott got him back to sleep. He was like man he's heavy lol. 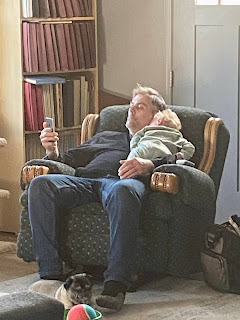 He didn't wake up until right before his mom got back. He did the cutest wiggle when she walked in, so excited to see her.
I got all my coffee fabrics chopped up and a few sewn up. 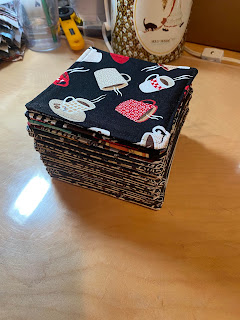 Here is my first set (I have 2) of coasters. This was one of those fabrics I thought was going to be smaller to use for mug cozies and then when I got it I was like what the heck am I going to make out of that? I think I've had it for several years. They have coffee words on the back, forgot to take a picture. 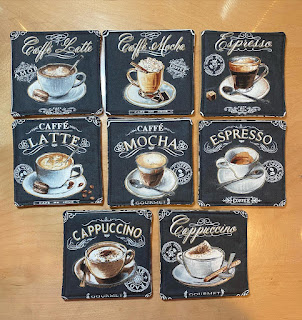 and here is two small sets front and back. I tried to make at least 2 the same when I was matching up fronts and backs to do. 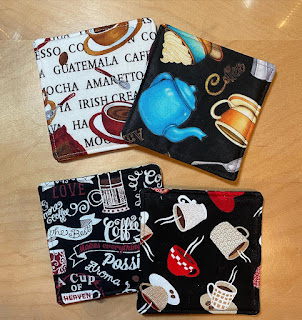 I think I'm just going to put them all out for a dollar a piece along with the mug rugs I made before. I have a bunch so maybe it will clear them out? We'll see lol. Whatever is left after my two shows I will put on Etsy I think.
Today I will probably continue working on some more. Nice to use up fabrics I've had around forever.
It is a little bit less foggy outside, I think we have a "maybe it might rain" in the forecast this week. Hopefully it rains and lets the sun out for a day or two. This fog is depressing.
Pin It
Posted by Julie H at 8:58 AM