Good morning happy Friday!
Reporting in from my mother in law's kitchen table again.
I didn't get the wall cleaned over here yet but I did clean a big portion of the kitchen counter and the stuff on it. And the silverware drawer. There was so much silverware. I was like why is there so much? One bucket was this tiny forks and knives.
(big one for reference) They were way smaller than a salad fork which everyone guessed on FB. Finally someone noticed that it says British Airways on the back! Scott was like oh yeah that was in my grandparents stuff they used to fly all the time lol. So airplane utensils. Did they let people take them or did they just stick them in their bag? lol 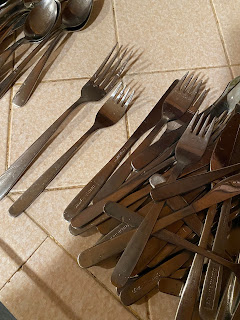 Then there was this thing? I'm like I feel like I saw this on an informercial somewhere. Jess found it online, it's a bagel knife! So weird lol. So I washed all the silverware and sorted out two sets to put in the drawer and then put the rest in a large zip lock and put it in the cabinet. 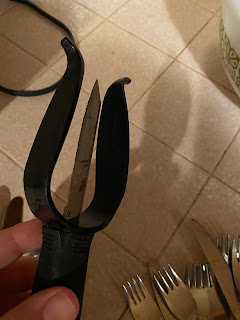 I made tuna casserole for dinner. One whiff of it and I was like ew this is going to be gross lol. MIL didn't like it either so she had cream of chicken soup instead. I just ate mine since I had all the calories figured out already.  Scott said it was ok and Trevor ate a bunch of the left overs. He's like Mikey, he'll eat it lol. Scott came home at the same time as me (his brother was puttering around outside in the shop when we left) and took a shower. He came back and stayed the night with her.
My animals are all sad I'm gone all day. Thinking about bringing Snookie with me but then Rusty would probably be sad. He acts like he's going to eat people sometimes so I don't know about bringing him over lol. Even though he is an old fat dog. Last night I was cutting Snookie's nails and he started barking at me. Don't hurt my girl he says haha. 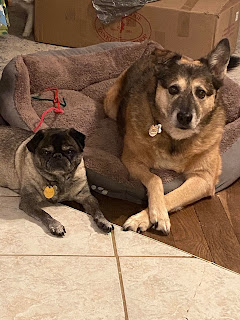 We have darts tonight so mil might be by herself for a couple hours. Hopefully Scott's brother will be here again so she won't be alone.
We are planning for my friend Traci to bring her mil over. She is the same age as mine and has lost 2 out of 3 of her kids. I think she will enjoy having her to talk to for a little bit. Lucille (my friend's MIL) is very faithful also so I think that will be good for her to comfort my mil.
ok not sure what else I was going to say haha. Back to emails of work to do!
Pin It
Posted by Julie H at 10:05 AM

Why were you going through her drawers, moving her?
It's like you made a play date for your MIL.
Enjoy your weekend. I'm sitting in coffee shop waiting on a blogger I've never met.😀

@peg no one has cleaned here in ages. There was 2 buckets of silverware in the counter I was cleaning lol

Oh my goodness, plz visit me then. 😀

Wow, I’m sorry to hear about your SIL. It is amazing how things get neglected when folks are in bad health or depressed. Clearing /cleaning the kitchen counters can make such a big difference, and it’s so much easier to pitch clutter when it’s not yours. —Molly in Michigan