Good morning! Happy Sunday! I've spent the morning cooking!
I made up a rice and ground turkey casserole to pop in the oven later (no recipe just something like my mom used to make), then made up some soup with these tiny star pastas I had bought for another recipe I never made, and lastly some banana nut muffins with my mother in law's recipe.
Figured she'd at least like the muffin haha (made some without nuts so they would be easier for her to eat). Now for me to not want to eat them all ;) I figured out the calories just in case I want to give in. 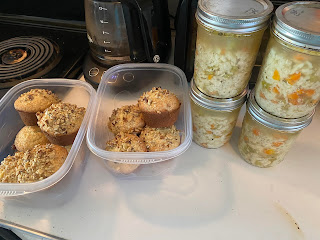 Last night I made this Healthy Turkey Chili recipe, which of course was too spicy for MIL. I didn't think she was going to want to eat anything since she had said how she was SO FULL after eating her cream of chicken a few hours earlier haha. I think it smelled really good so it made her hungry. She ate the cornbread and a couple bites of some chicken noodle soup I warmed up for her instead. This is probably the most she's ate in months. 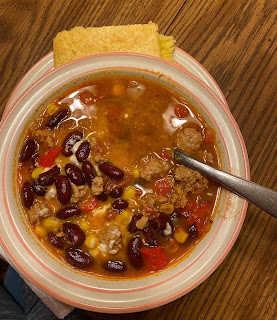 I just had some left overs for my brunch.
This popped up when on Lose It yesterday. I'm actually down 10 pounds but I thought it was funny. 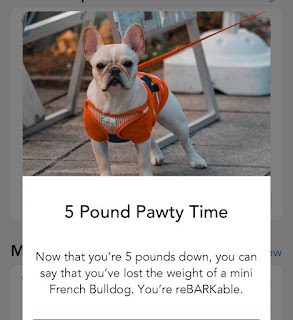 Saw this on FB today. God weren't those things awful! I remember wanting them so bad because they were popular. I got a WHITE pair. Where we lived at the end of the street was a park, then a field, then the school (elementary). For some reason I remember being late (back in the day when your parents didn't drive a block to drop you off) and running across the park and field and then slipping in the mud and landing on my knee on those white pants. So much for looking awesome. I think my mom got the stain out but that was traumatizing.
I'm built like a square even when I am skinny so I have no butt/hips to hold up my pants. The stirrups would just pull my pants down. Horrible! I remember finally cutting off the elastic on a pair (I think I had a red pair too) and just putting my slouch socks over them so they looked cool. 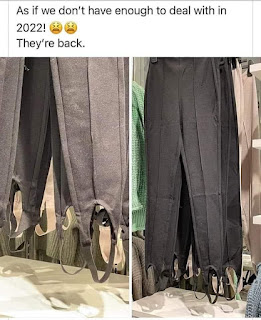 Need to round myself up soon to head over to my mil's house to give Scott a break. She was so much better yesterday. She stopped doing that crazy talk she had been doing. It must have just been her nerves/grief that was triggering that. Also usually she didn't have anyone to talk to except if my sil came out to be with her, but I'm not sure how much she did that when we were there. I went and laid on the couch in the other room for a bit after her bath and when I came back she was like "There you are, I was looking all over for you!" I said I think you just searched in your mind because you didn't get up haha. She laughed.
Scott got the big side yard and the front yard mowed yesterday so it looks so much better. Like a big green park! Should probably try to keep it watered once it's not so wet out but that's a lot of work lol.
I have been playing with the idea of taking my dogs to mil's. She said NO DOGS IN THE HOUSE. I told her Snookie wasn't much of a dog lol. She said that's the Indian way (her mom was part Indian, Grandma lived on a reservation but doing DNA genealogy my kids only come up like .1%). I was like I think the Indian way got washed out a bit ;) Scott said we need to bring them over to get rid of the squirrels in the yard, man they'd love that! I told him we need to make sure the fences are secure before letting them run around out there. Might maybe take Snookie over there by herself first.
Ok guess I'll get myself cleaned up and head out. Hope you are all having a nice weekend :)
Pin It
Posted by Julie H at 11:02 AM

I know those stirrups are back - NO way. First of all they were originally made so when you tucked them into boots they did not ride up. Not to be worn without boots but somewhere along the line it changed. So ugly! We all had them. Not this time besides, my rule is if you wore them the 1st time they were in style, you're too old to wear them the 2nd time. It usually is correct. :-)

I agree with Peg’s rule. Plus I refuse to wear anything uncomfortable anymore, I paid my dues. Molly in Michigan