Good morning happy Saturday. Sleeping in on Saturdays are the best!
Scott brought a tv over to his mom's and the PlayStation so he could zone out a bit while he's here. He wants to get internet hooked up still so I guess we'll do that soon.
Today mother in law is watching the food network with the sound on which is so much better. I came over so Scott could go home and mow our yard. Five bucks says he takes a nap in the recliner while he's home haha.
MIL was ready to take a bath and asked me a couple times to help her so that is what we did so far. I'm so glad I remembered to bring my little space heater to warm up the bathroom. I bought an extended seat that goes across the tub awhile back so she could just sit down and scoot over. Her bath tub has a hand held shower attachment so that worked great!
Her hair is so long, she let me French braid it for her. It looks so nice out of her face. I told her I was going to take a picture to show the girls 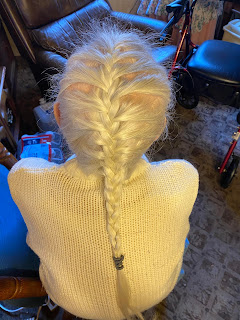 and she said take a picture of the front of me smiling since I'm so happy. She has quite the collection of stuff on her bed. Hoping to move the extra clothes off later, she doesn't need them all there if we are here to help her. 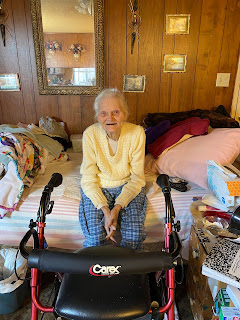 I'm ready for a nap now. Her poor hands are shaking probably from the excitement of the bath and all that. Pissing her off.
Last night we played darts and the team we played against was some friends of ours, so that was fun. We didn't win over all but I won a game and Scott won a game and then he won the 501 game that we play last.
I started making this Chicken Parmesan Casserole at his mom's last night but ran out of time before I had to leave for darts. I got it to the point that it just needed to go into the oven. Ended up just cooking it up after darts since I still needed to eat dinner. It as super yummy (forgot to take a picture of mine).  Definitely a higher calorie meal though! Amazingly I still dropped some more weight this morning. Closing in on 190!
Tonight I'm going to make a turkey chili recipe. That's about all I've got for today so far. I think I'm going to sit in the chair and zone out a big haha. It's been a long day already.
Pin It
Posted by Julie H at 2:40 PM

It is so wonderful that you are caring for Scott's mother. She is so lovely and yes, her hair looked absolutely beautiful braided! Glad you also made time to go out as a couple and have some fun!! Have a great Sunday!