Good morning happy no grandma sitting Saturday! I swear I'm living for Friday-Sunday now. Although I do miss Scott being home (and making breakfast haha).  Hopefully this doesn't go on forever.

Thursday night I made this  Taco Pie for dinner. It was good but pretty spicy. I'd tone down the spice a bit more the next time I made it.  Excuse my bad lighting picture. I made a little bit with no spice for the MIL but I don't think she tried it. I also gave her a toaster strudel which she gobbled right up. 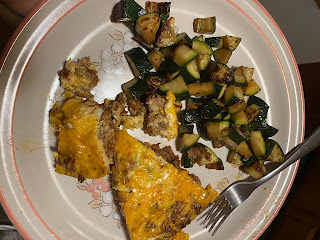 Yesterday I went into the office to work. It was almost a full house in there and no one wearing masks. Every time someone coughs I'm like ugh I'm going to be getting all the viruses again. Apparently they are opening the doors on Friday. I don't see it being long until we are all expected to be at work in the office every day. No idea what we are going to do about Scott's mom when that happens but someone is going to have to make some decisions. Scott's boss gave him a $3 raise so I think that was incentive for him to not quit. Also helps out with the gas a bit.
I took this picture for my friend for our gas price and didn't even notice the sticker until later. Just makes me laugh since everything is so corrupt everywhere. All the politicians with their dirty little hands in there somewhere. It's amazing this little hole in the wall gas station that is about 6 miles from any other gas stations has kept their price competitive. I only needed 1/2 a tank but figured I'd better just get it since who knows how much more it will cost in a couple days. Trevor said it cost him $100 to fill up his truck. 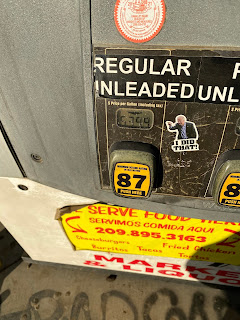 The guy who is in charge of the office and the other girl who was in charge last month (both work in our neighboring office) were micro managing how they want the application to contract folders put on the shelf. I just laughed at them both because NO ONE will put the folder on the shelf but me. I've been fighting with everyone for like 10 years to put stuff on the shelf. I'm just like you are way over thinking this and no one is going to pay attention to your little stickers. He's like how will I know if it is ready for the next step if it's not on the shelf? Uh spreadsheet? Emails? Apparently he doesn't like doing stuff on the computer. FACE PALM. Just stupid. Good luck dude.
I have SO MUCH work to do right now. I knew it was going to be like that, it is either feast of famine. But since I don't get paid extra to work ahead I didn't so it will just get done when it gets done I guess!
My real boss who is done at the end of the month came in to clean out her office and brought cupcakes. They were delicious. I ate crap all day yesterday. I really need to do some cooking ahead/meal planning better to keep myself out of the drive through. It is too expensive to eat out too. 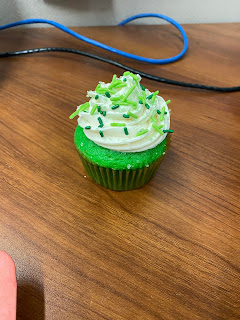 Trevor and I went down to the club kitchen to have dinner before darts. This was too expensive too but it was good and I didn't have to cook lol. My friend Ann subbed for Scott for darts since Eric was on duty at the fire station (he's an intern now). Melissa came too of course! We won 3 out of 7 games. The other team was fun though so it was nice. Just one more game left then we are done. I'm not going to sign up for the spring league since we have so much going on. 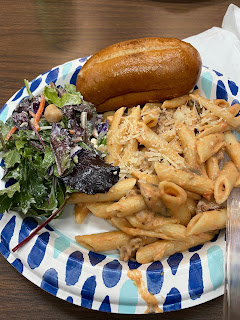 I got to sleep in this morning which was great. I have the laundry going since I'm down to my last pair of panties in the drawer lol. And we all know how the last pair is, it's the ones you really don't like or don't fit well or both.  Just having some coffee and emailing with my friends. I need to clean up the house a bit too. Someone went on a barfing spree last night. Probably Tina since she seems to be the one that does that. Of course it is on the one bit of carpet/rug in the house. My moms says they do that so it doesn't splatter lol.
They are doing some RC boat races out here on the lake and have lunch and dinners for sale. I probably won't go down but it is a little tempting to go hang out.
Ok that is all for this morning, have a good one!

Labels: back to work, gas prices, what's for dinner