Good almost noon, sheesh it is so late already. Thursday which means it's almost my weekend from Grandma sitting woohoo. Mostly I just look forward to getting to sleep in. This morning I got here and promptly fell back asleep for over TWO HOURS.

Yesterday Ann had a bath and got her hair braided again. She was way more alert yesterday which makes me think some of that sleeping is just depression. I'm always torn between waking her up for something and just letting her sleep. I know I wouldn't want anyone to wake ME up lol. 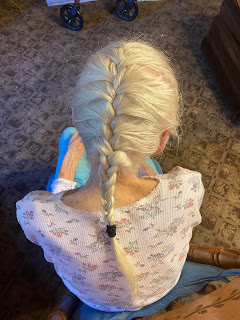 My brother in law came over around 2:30 for about 5 minutes. He came in and declared that the room she was in was stuffy and he opened the window and the back door to "get more oxygen". I was in my head like she was just shivering a bit ago from her bath but thanks.. He brought her a dozen cupcakes and a card which she was thrilled about. I had already made her a cake so now she has A LOT of chocolate lol. Good thing I won't be here for the next 3 days. I cannot resist chocolate.
One of her daughters sent her a text that said Happy Birthday and that was it. Sad no one called all day. Usually I'm only here for a couple hours to bring her dinner and a cake so it is sad to see that no one actually calls or comes over. She didn't even get a card in the mail.
I was complaining to my mom and she sent her flowers. That was very nice of her and they are just gorgeous! 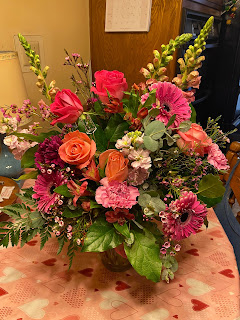 Melissa and Trevor came over (Jess is going to come over with the baby later) and I got us all In & Out for dinner. Then we had cake and ice cream. 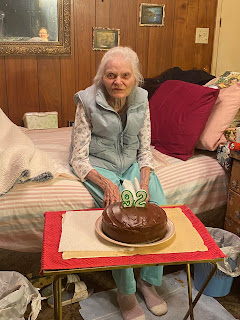 I left at 9. I wanted to at least do something for myself before bed so I worked on labeling some more of my cozies. I have been making an inventory list and I have over 300 and I'm no where near doing them all. Crazy! I think the next show I do I am going to make them 2/$5 to clear some out. I think I've said that a few times then I get to a show and people pay $5 for them and I'm like well maybe not haha. I definitely am going to make a $1 clearance basket though for some I've had forever. I went to bed at midnight and then dragged myself out the door at 5:45, sheesh no wonder I'm so tired.
I was talking to Jess this morning and she said that Daniel has grown 1 1/2" in 3 weeks! Isn't that crazy? Reminds me of the story Scott's mom used to tell of when they went school shopping and when he started school a week later all his pants were too short.