Good morning happy Tuesday! I'm wide awake listening to a rooster crow in town. Funny how those things are everywhere they aren't supposed to be.

It is so weird this morning, Scott has already left and his mom is still sleeping. He said he got up at midnight and turned her TV off and she's been asleep every since. He's been having a battle with her over turning the TV off which I find kind of funny since I've been getting up and turning HIS TV off for about 30 years lol.

It is supposed to rain a bit this morning so I'm just waiting for the show. 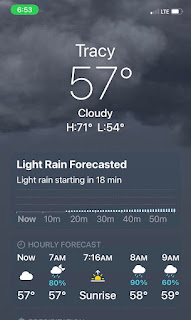 Yesterday I talked to my friend Lupe on the phone for about two hours. She has had a lot change in her life lately and she is moving to Texas at the end of the school year. Her step daughter will graduate from high school this year so she is staying until then. Her husband has already moved to Texas and they are having a house built there. Her house here is being sold and the profits from it will pretty much pay for her house there. Crazy.
When Scott got home we were talking about moving (I doubt we ever will but we were just talking) and his mom yells something about us talking about selling her. We were like sell you? What are you talking about? So we go into the other room with her and we were telling her what we had been talking about and then she just goes to sleep lol. Well ok.
Scott said after I left she was crying talking about how she's not ready to die yet and stuff. Then he made her pancakes and she was fine. So who knows what we'll get when she wakes up.
It is so weird but her face looks entirely different with her moods. When she is happy her face is softer and then when she is mad or confused she has more lines on her face. I swear it is like a different personality.
Scott keeps saying he can't keep doing this forever and I'm like yeah I hear ya.
The only exciting thing I did when I got home last night was help Trevor with his taxes. He's getting a small refund back and he's like woohoo that's like 5 tanks of gas. Sad.
As much as it sucks getting up so early with the time change is sure was nice for it to be light out longer!
Pin It
Posted by Julie H at 7:04 AM