Good morning happy Monday! I got to Scott's mom's early this morning. He left a little earlier too since I was here I think. I fell back asleep for about an hour too so that was nice. (Although I keep telling myself I need to stop doing that so I can get used to getting up!)
I spent all day yesterday working on putting the cozies on the cards and then fixing up my Etsy listings. The Etsy part really took the longest. I think After I get all the ones I have worked on in their little wrappers I'm going to take a break from those for a bit. 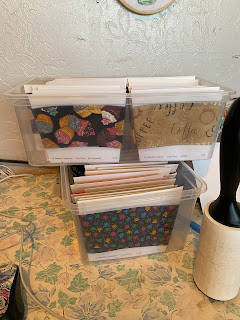 Rusty saying that he want to go out 500 more times. 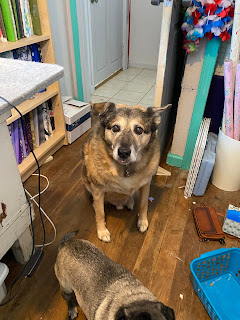 OMG Trevor brought Lucy in like this and I laughed for a good 10 minutes. So hilarious. She is the only one that likes this cat bed, which at least someone decided to like it. 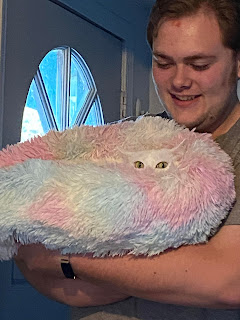 Tubz looking all beautiful on my bed. 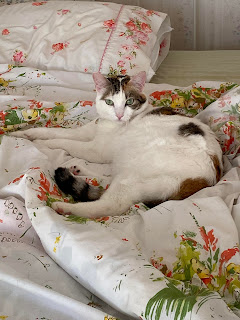 My mom is stressing me out. I don't know why she picks the times when I'm already a little stressed out to stress me out some more. I had told her she could bring her little trailer over to my house and use it there. That turned in to her getting this expensive cover for it and wanting to like put bricks under it and stuff. I was still like that's ok but you won't be able to put it in the one spot we were thinking since that is my septic expansion lot and they won't allow you to put a cover over it (in our club rules).  We were going back and forth with ideas and then she has to bring up something with her and Jessica that I have already told her I didn't agree with what she did (twice) and I just tell her I don't want to talk about that stuff. And since I don't want to talk about it and tell her I don't think she did was right now she's mad at me.  I just want to have my mom and my kid and have a relationship with them both without having to say who was right and wrong. No one is perfect lets just move on! I'm kind of regretting telling her she could put the trailer at my house now but then I'll be the horrible one if I say it.
Imma just going to disappear for a bit sheesh.
Scott was so stressed out taking care of his mom all weekend. She complains about everything he cooks. Makes some reason she can't eat it. She even complained about a pizza she had ate 3 pieces of with me lol. She definitely acts different with him (and/or he reacts different to what she does). He was ready to move her into a home Saturday night. He said he told her last night that the reason no one comes to see her is because of how she was acting and that he doesn't have to stay here if she's going to be that way.
We both definitely need a vacation.
Pin It
Posted by Julie H at 9:45 AM

Omg, you guys have been unbelievably generous with your time and energy, I’ve been in awe of all you do. It does seem like it’s time to take it to the next step…you have done so much to improve the quality of her life—that was a gift to her and to yourselves. Now hopefully you can move forward knowing that you did everything you could to bring her back. Take care, Molly in Michigan