Hellooo Happy Humping Day! Oh wait I think I got that wrong.
Made it to work by 8am today, I think that might be my official start time but I'm not sure lol. I changed it and I can't remember if I changed it to 8 or 8:30. It was a few months back at least. No one seems to care anyways. I still always beat who ever is in charge into the office.
I had to run to the store after work because I'm out of coffee creamer or anything that can be used like coffee creamer. So I picked up a few other things and then hit the Hawaiian BBQ to pick up some dinner, since hey why not?  Rusty thinks it smells freaking fantastic apparently. I gave him some cabbage and now he's still acting like it's all for him. 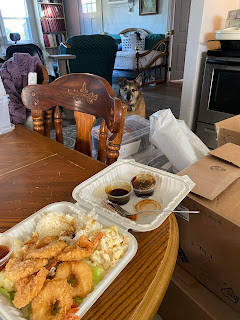 Also finishing off this margarita mix. This is what it looked like when I took it out of the freezer Peg. I had to wait for it to get slushy so I could get it out lol. I used one of Trevor's chop sticks to poke it and stir it around. I put what was left back in the freezer yesterday so waiting on the final slush haha. 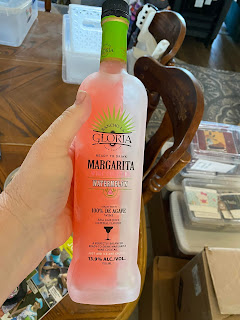 Before I went to the grocery store I went into Kohls to see if they had any Birkenstock type shoes. I have some knock offs and I've worn the bottom completely down on the back heel. When I first went into the store I had a coughing fit because the store smelled like they were shooting perfume through the vents. Had to break out the inhaler so everyone wouldn't think I had the rona or something.
Anyhow, I came out empty handed because they only had the ugly ones. But do people really pay $80 for fancy flip flops? Yeah no, I do not pay $80 for fancy flip flops. I'd drop $100 for fancy running shoes but not flip flops. 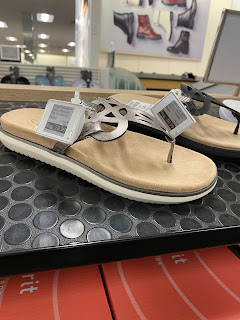 I made it to day 3 before going to the thrift store by my work lol. I got a bag of stuff but it's still in the car so I'll show you later. Here is a sewing machine like my mom's. I learned to sew on it. It belonged to her grandma Frankie. $250 for this one. I lifted the lid to see if it was in there and it was. My mom's comes to me eventually so no reason to get a 2nd ;) 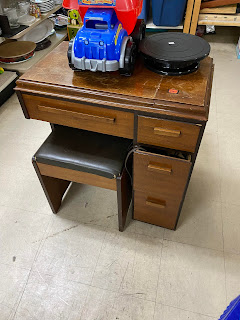 Today I was all caught up with regular work so then worked on the new shredding of files I made for myself yesterday. I got about 1/4th done so I'll have some more to work on tomorrow. I filled 2 black trash bags of shreds.
Ok back to catch up days. Saturday I got up nice and early and was down at the car show to set up by 7:15. It was all still for about an hour then a light wind and then by 2pm it was GUSTING and I gave up and packed my stuff up (the show was over until 4). 3 people that I saw had their tents fly up. The one next to me was ruined.  Weights people, weights! I didn't make a whole lot of money since I had to clean up before it was over. I was also all the way at the end so I think some people didn't walk down that far.
My booth, the girl next to me spent all day setting up plants. The money was going to our beautification committee for the club which was nice. She was late getting there, then took forever to set up, then the wind stole her canopy and broke a few things then she had to clean that up. I don't think she sat down the whole time. 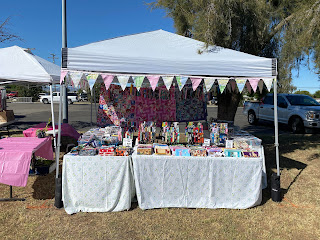 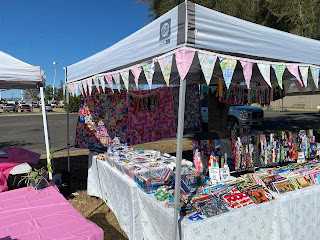 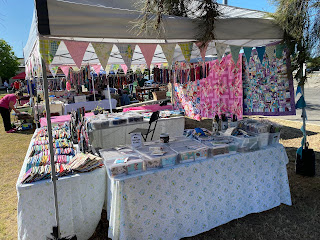 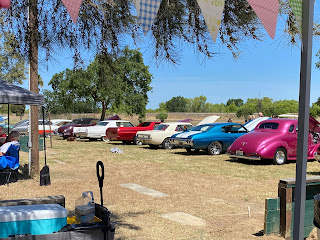 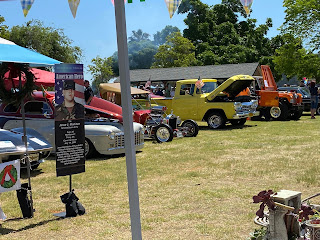 and my favorite little visitor. He didn't stay too long since he wanted to RUNNN when he was out of the stroller lol. He is so long already and he's not even 2. After we packed up Melissa, Eric, Scott and I hung out with my friend Lupe in the bar for a bit. So that was nice, she is moving to Texas at the end of the month. 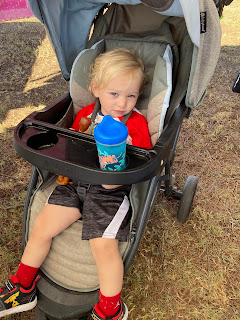 Last night I worked on my zip bag inventory then had to cut it short since Jess was in meltdown mode. Scott came over and we went and got her a new hot water heater and he put it in. The one my mom had just bought a little over a year ago wasn't working well and Scott said it was lucky it didn't catch on fire when he was seeing what was wrong with it. Sheesh that is scary. So hopefully the new one will last awhile. I bought the extended warranty I need to figure out how to register it.
Tonight I am planning on working on the zip bags some more. I need to hurry up I had some stuff I wanted to sew before this weekend. Did I tell you guys I signed up for a little show on Saturday? It is a small car show one and over by 2 so won't be too long.
Pin It
Posted by Julie H at 7:13 PM