Good morning happy Mother's Day Sunday! My hangover and I woke up and took the dogs out, fed the cats so the dog would leave me alone and then went back to bed haha. I'm up drinking coffee and had some waffles for breakfast. I was so asleep I didn't even hear Trevor get up and leave this morning. 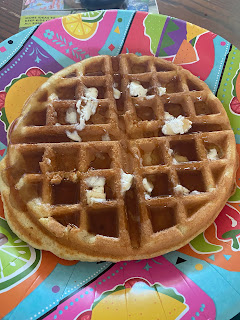 Friday night Scott and I went to sushi. I didn't take any pictures but it was super yummy as usual. When we came back I went to bed since I had to get up so early. Scott decided to just stay home and slept in our bed for the first time since the end of January. He got up early with me and went back to his mom's house. He said it was like he never left so I guess she did ok. He's switching his extra day off from Fridays to Mondays now so he can spend time with Trevor on his day off (along with there being more traffic on Mondays), so that is nice.
So Saturday morning when I left it was already windy. Ugggg freaking hate wind. My stuff did ok though, only had a few things fly off the table. I ended up doing pretty good for not restocking anything after 2 shows. I set my tables up with the zig zag way since there was people next to me on both sides of me. There was a lot more vendors at the event this time than there was the last time I did it. 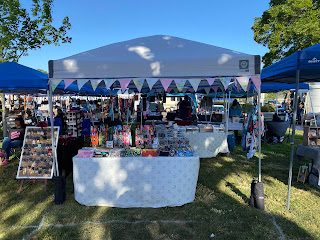 This is such a great way to set up, especially if the booth on the walking side doesn't have stuff all the way up to the edge. 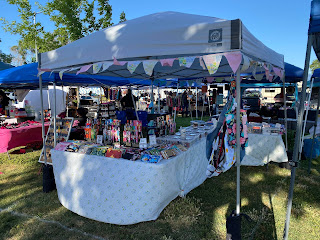 This whole area was filled with cars by the time the show was running. The park was packed with cars! 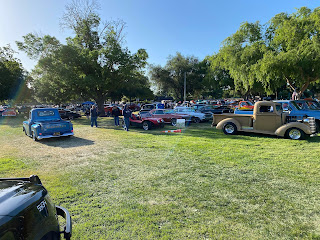 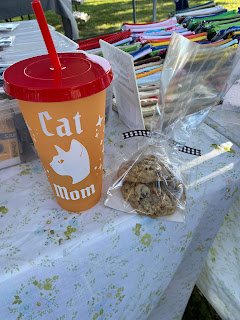 Isn't this a cute idea for a booth? I don't think they were actually selling anything other than being able to rent the trailer. It took them forever to park it and then later they moved it over some more and that took like 3 tries. That would be me before I would give up and get someone to do it for me haha. 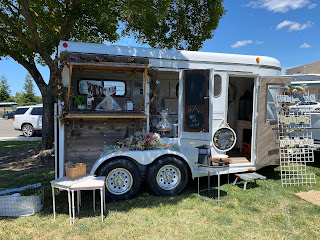 ETA just finished my inventory
I sold 25 keychains
26 cup cozies (still selling them at $1 each to try and reduce inventory)
32 zip bags
and 2 masks
When I came home I went with Scott to Home Depot to get something to finish fixing our kitchen sink. The pipe rusted through and was doing a fountain under there. TG he knows how to fix things. It is up and working already. When we got back I took a 2 hour nap on the couch. Then I went down to the bar and hung out for karaoke night and actually sang twice with friends. That was fun. They have the music up loud enough you can barely hear your awful self singing.
Someone brought these lights down, apparently they are solar lights from the dollar store but they were a lot of fun on the table and doubled as fake maracas ;) 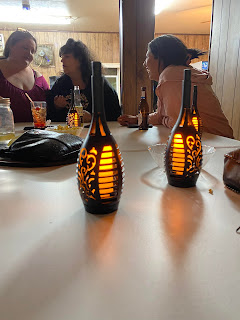 Scott just came home and brought me a card and is washing the dishes. I still need to unload my car and inventory my stuff again. Shouldn't take as long this time since I have it all organized and sold a bunch more. Hope you all have a great day!
Pin It
Posted by Julie H at 10:55 AM