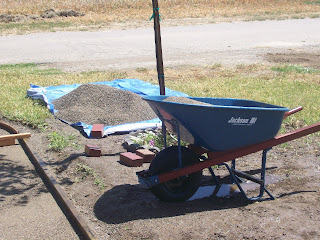 Anyone have any idea how much a wheel barrow full of sand weighs? I'm thinking it's WAY over 100 pounds. Maybe two.

This morning I was going to go straight into working on my bookmarks. But it was NICE outside. Nice breeze, slightly overcast. When I first went out there I thought I might need a sweatshirt. I thought, I'll just work on evening out the sand a bit. Scott made this nice little "tool" to even it out. I worked a little bit and quickly realized that there was WAY too much sand in the pit.

Off to get the wheel barrow.

Ok I'll shovel some sand in here. Then I'll go find a tarp and spread it out on there and we can use it for the next project.

I shovel and very quickly the wheel barrow is full.

About this time my mom shows up with my brother's dog she stole yesterday because he wasn't taking good enough care of it. I chatted with her a bit while I worked and then went in search of a tarp.

Lucky for me found it right where I thought it was and didn't have to unpack the whole shed to find it.

Bring out tarp, put on end of porch. Go to move wheel barrow. HOLY SHIT BATMAN! That thing is heavy!! Couldn't even lift it up. Mom was going to give it a try and I told her don't even try it it's REALLY heavy. So drug the tarp closer to where I was working and shoveled straight onto the tarp. I'll either get Scott to empty the wheel barrow or just shovel it out later.

Mom left and sounded like she wanted me to come over for lunch but I have things I need to do today.

Finished evening out the sand and tamping it down with the little tiny tamper. Seriously that thing is so small. I wonder why they bought such a small one? (came form Mom Depot). I'm sure the end of the walkway is not entirely level since Scott's "tool" didn't work down there. I tamped it all down the best I could and called it done. 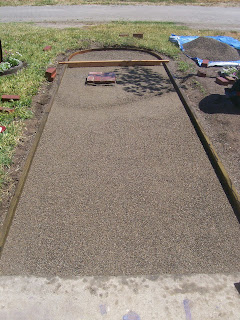 As soon as I can feel them I'll get back to doing what I had planned for today.Pin It
Posted by Julie H at 11:32 AM