Geeze these people make me so stressed out.

Tomorrow is Trevor's registration day for school. Basically they do all that stuff we did on the first day of school a week before school starts. Talk about stupid. Melissa is taking him so I had to get everything ready. This year they want them to do all the paperwork stuff online which is great except it seems to me that one portion isn't working. Hopefully they let him register with how it is because I've tried 3 different computers and don't see anywhere I can put in my emergency contact info.

Only have to do this 2 more times and I'm done woohoo.

I just got home from Bunco (I got 3 but the winner had 5!) and went to try and log onto my computer and it was just a black screen with an arrow. After two tries I got that to log on. I should probably work on backing my stuff up somehow..

Meanwhile Scott is just talking to the baseball game non stop. So annoying.

So how did I do on my weekend to do list? 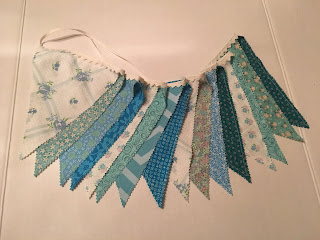 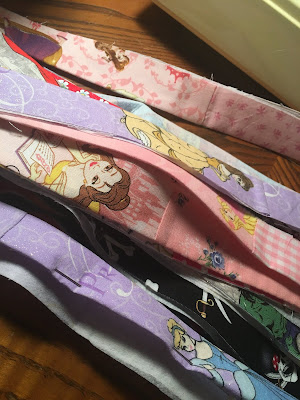 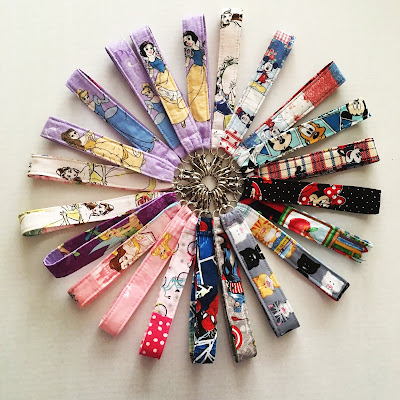 I got a few more that were partially done but didn't take a picture of those yet.

In between sewing I went to my brother's house for his birthday. I actually got in the pool since it's like 150 outside. Believe it or not his pool water was still super cold. I didn't stay in too long. 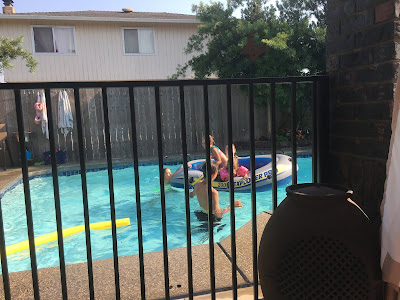 I did take one picture of the birthday boy AND the dog! I tried to get pictures of her but I startled her and she kept hiding from me lol. She so dang cute. Her name is Sadie and she's a goldendoodle. 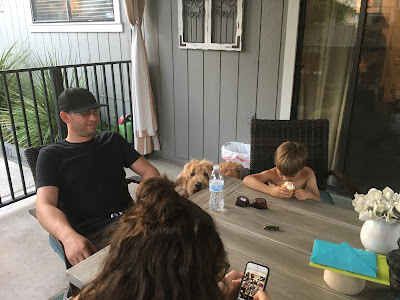 I MAY have finished out the evening at the bar. Jessica and I left Scott at home since we had already listened to him talk to the stupid baseball game all the way home in the car. I can only take so much talking to the baseball game. 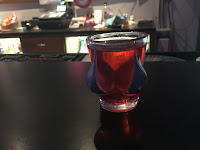 Sunday I had book club at my mom's place. I had to pick up Marian and take her back home. Poor girl didn't even remember that I had called her at 1:30 to tell her I'd be picking her up around 2. Luckily her neighbor was there and she was already to go.

Oh and Friday night I noticed an ad on Facebook for the Lodi Street Fair and I signed up to be a vendor. It's in October. It's a little bit expensive to sign up but my friend said in May they had about 30 THOUSAND people show up. Woohooo. I'm pretty excited about that. So I'll be sewing my little heart out until then ;) The booth sizes are a bit bigger too, 13x13 so I want to play around with the layout a bit to figure out how to maximize that.

Well I'm ready for bed. I could barely get up this morning. I've been having some really vivid dreams lately. So weird. I just asked Scott if I yelled at him when he left this morning because I was totally pissed off at him in my dream haha. 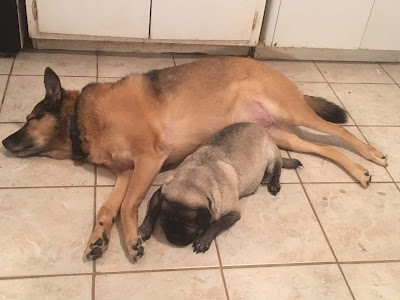 Those keyfobs are adorable!!! I love that you are such a talented seamstress!!! I cannot sew anything!!! LOL!!
That is hilarious that Scott put away clothes and vacuumed - impressive man you have there!! Send me his brother!!! HA!
I hope you end up getting a ton sales!!! It is so hard to sit in a booth all day and not have it be worth your time and effort!! Good luck!!!

Holy shit are you a busy woman!!
And yea Scott for doing his own chores without being asked! Big Boy! :-)
I have had dreams when I am so angry at Rick and then when I wake up I still feel angry at him and he always says, go back to sleep I'll apologize. :-) Makes me laugh