Yesterday I got a bit accomplished! Jess came over to get her Christmas ornaments but we couldn't find a bunch of them. They must be in their own box that has got moved back and forth a few times with her moving but no one knows where it is. Hoping they show up soon.

So now I have even more crap in the living room.

I got the kitchen cleaned up and cleaned off the little shelf I have about the sink. I had a bunch of tea cups on there which have become clutter containers so I took them down (also trying to minimize how many things need to be cleaned/wiped down/dusted in my house). I also cleaned off the top of the refrigerator which is apparently another one of my husbands favorite spots to leave his check stubs. Yes he still gets checks for his paycheck and he gets paid every week. They are everywhere. I don't understand why he can't just put them in one place. He thinks he might need them for something some day I guess. I have a stack of them now to shred next time I go into work. I should just get a small shredder for at home.

Anyhow! Then I cleaned off a bookcase that has also just become a pile of stuff. It looks so much better now. I was thinking of getting rid of my paper back books here but I couldn't bring myself to do it. They were my favorites growing up. Maybe I'll read them one more time first ;)

Don't mind my ugly heater. It is still a jumbled mess but I pulled quite a bit off of it. Maybe some day the living room will have the built in cabinets I want and everything can be arranged cuter.

The bottom stuff is all toys for the nieces/nephews and now the baby when they come over. They'll all just have iPhones by the time they come over again at this rate. 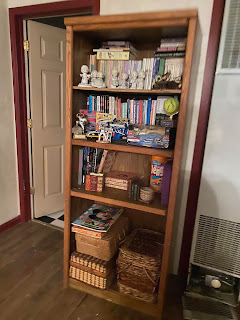 Free shit don't take my table. Every time I post these to my little neighborhood site I wait for my mom to get mad that I put something out she bought lol. There are a few on the table here, we'll see if she says something. (she's in the group too) 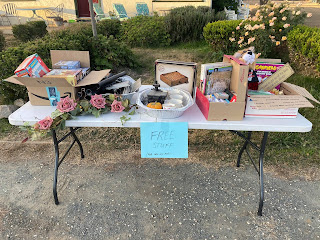 I found these little books when I was cleaning. These were favorites to read to the kids I would make funny voices when I read them. I'm going to let Jessica have them for the baby. 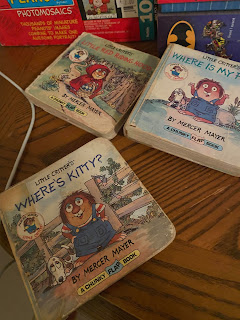 My senior picture proofs. Red was my school color and my grandma had all my cousin's pictures with their boa's on her wall so I wanted mine to go with them :) 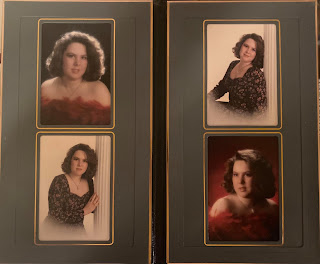 Sunset out the kitchen window (yellow is the kitchen light reflecting). I took down the curtains I had up there, they are disintegrating. This is our last "old window". Some day I'd like the kitchen sink to be under the window so I can look at something besides the wall. 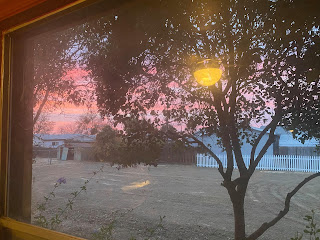 We got the new router set up yesterday. My work computer is quite a bit faster so yeah!! It's doing what I had hoped it would do.
Ok off to work, still just doing boring stuff. I've been watching all the old Survivor's on Prime in the background while I work.  I don't know if they continued to do it but they have been bringing back two people from previous seasons to play in the last two seasons I've watched. Kind of makes a weird dynamic. Hope you have a good day!

you are so much nicer than me. those check stubs would bother the hell out of me. Put them in an envelope in his sock drawer or some thing since he is not doing it the 21st century way and having it automatically deposited. They still give you a stub if you get it automatically deposited. You can even scan them to the computer. But all over the house - oh that wouldn't last here - you are so nice Julie!! Love the senior pictures. So pretty. We didn't dress up fancy. I think I had on a pair of jeans and a turtle neck and you only saw the face so it didn't matter. Back in the olden days that is what you got. :-)

@Peg, I found 2 more this morning lol. There is only like 3 employees so they don't do direct deposit at all.