Yesterday after work I took the dogs for their 1/2 a mile walk and had to carry Snookie 1/4th of the way home. Such a diva. Then I went and met my friend and we walked down to the mail box so I could mail a couple packages and then she wanted to walk the "Island" which is more of a peninsula. I won't walk out there again the ground had been tilled and then left so it was so uneven and hard to walk on. Plus we were giving the poor geese a heart attack. They aren't used to people coming out there.
Picture is my neighbor's tree which is a pepper tree. They are enormous. I have seen them topped off several times over the years but they just come right back. 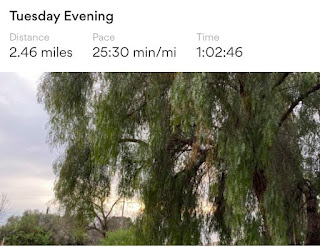 I watched 2 movies last night. The Most Hated Woman In America about the woman that got prayer banned from schools. Interesting move and don't want to give away the ending if you don't know it. True story.

And this one was a bit shocking since I didn't know the true story. Took me a bit by surprise. 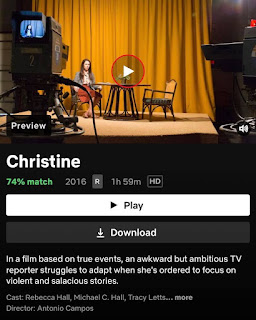 Mug cozies are ready for their top stitching and buttons 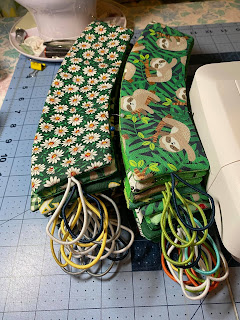 I looked over and Rusty actually laid in the bed for a little bit. Look at Snookie she's like MOM!! He's in my bed!!! She went in with him for a little bit before he left again. 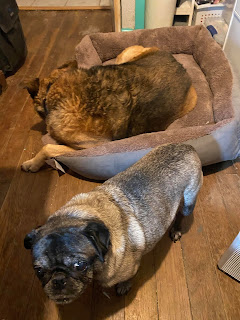 At work today, staff meeting through Teams. Joy! 98% of what we talk about has nothing to do with me so it is so boring. Just here to print things out and file. So far the printer is being slow as usual so not sure how much I'll actually get done.
Pin It
Posted by Julie H at 9:17 AM

I'm old enough to know the first story and glad she won. Religion does not belong in school unless you go to a religious denomination school.
I love that you only have to walk 1/2 mile. I could only hope.
I have not seen Christine and may need to check that out. This weekend is Coming to America 2 which I want to see. Then in April Melissa McCarthey and Octavia Spencer are in a funny movie.
It looks like some laughs. I adore these 2 so I should like it.
here is the trailer
https://youtu.be/qnx6-YLXFwg