I don't know about you but I'm going to need a lot of coffee today. I am so not a morning person and then this time change? I'm dead.

Friday I went to work but left on time, no extra hours. I started by doing some shredding of old files. I've been printing and filing payments that have been done while we've been working from home. So then I see the file is completed and has to go in the back but there is no room so I have to pull out the files that are old enough to be shredded/archived. It's a big circle. When we were working in the office the one gal was being super hyper about shredding the files since there really wasn't enough work for 3 of us. So all the files have the date written on them for when they can be shredded. Makes it super easy.

I left 2 big piles of files to do when I go in again next time too. 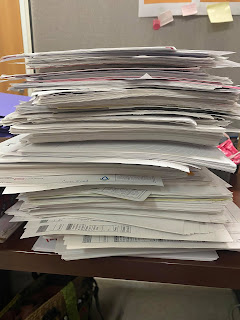 I went to the flea market on my lunch but didn't buy anything but food. I got Trevor some too to bring home since he is always requesting the "noodles". We ended up just having that for lunch/dinner.
Since I got off at a decent time I went to the thrift store after work. I got a ton of patterns and some fabrics. I'll share those later. But I had to send Jess a picture of this cookie jar. We used to have one and they always give me shit about getting rid of it. This is the 2nd time I've seen one in the thrift store but she doesn't ask me to buy it for her. 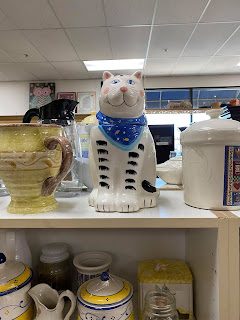 Here is a few things I cooked over the weekend (and Thursday)
Fajita chicken wings, these things are so good! I usually triple the recipe since that is the weight the wings come in. This time it was just double and everyone could have ate more. 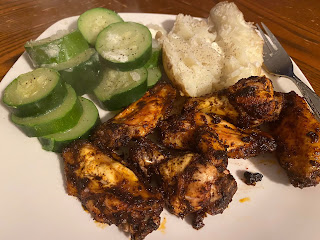 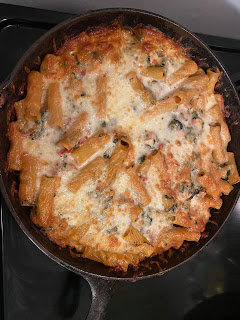 and last night I made this Instant Pot recipe but made it on the stove Pork Chops with mushroom gravy
That was the first time for this one and it was really good. 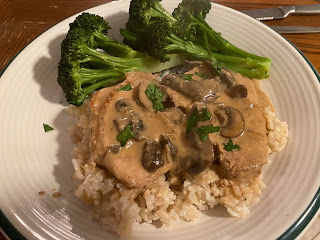 I have three recipes left to make that I bought groceries for.
Friday night and Saturday I worked on sewing up masks. Scott asked if I wanted to go to Home Depot with him so I went along for the ride. I got a new seed starting tray and some soil. I bought some seeds last year I never planted so figured I'd start with that. I will probably have a hard time keeping the cats away from them though so we'll see how that goes. Trevor went with us when we went. It is funny trying to find them in the store they are both built the same these big huge tall guys.
We decided to go get some lunch on the way home and ended up going to the Mongolian BBQ place. I called ahead and they were open. They have you wear gloves and get your own tongs to fill your bowl. There was one other table of people eating when we got there and then they left and another table while we were eating so hardly anyone in there. I don't know how all these businesses are surviving. To add insult to injury they are remodeling the outside building fronts.  The food was really good and I had to get a box to take a bunch home. 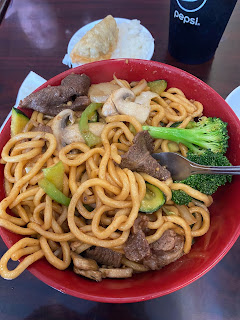 Scott spent almost the whole weekend working outside which was nice. I feel like mentally that is so much better for him than sitting in front of the TV playing video games all weekend. He started a fire in the fire pit too to get rid of a bunch of random wood we had. Some was from our trees and we still had a bunch of stuff from my mom's house before Jess moved there. It was cold outside though so I didn't stay out there long. 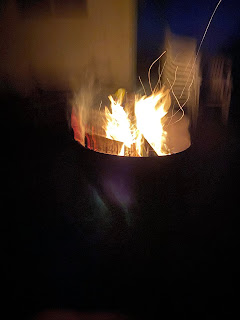 I didn't watch a lot of movies this weekend I felt like I had ADD not being able to focus on one thing to watch. Kept going back and forth from the You Tube videos I like to Netflix to Tik Tok.
This one just came out and was good though. I have only seen a couple of her movies, I am going to see if any others are online to watch. I wasn't a big fan of Breakfast at Tiffany's. I couldn't believe she threw her cat out. What a bitch! 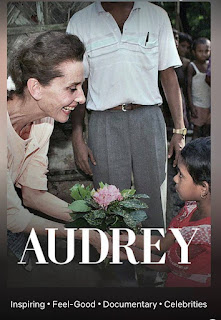 This movie East Side Sushi was SO GOOD. It's a bit slow but just keep watching. Also subtitles are needed. 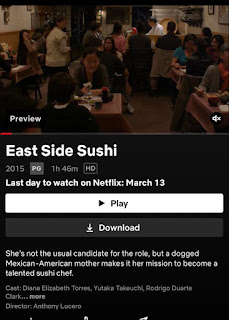 This is what I came in to this morning. When I'm sewing I tend to throw everything on the work table. What a mess! I have 1/2 of that cleaned up so I could find my keyboard. I'm working on about 45 masks at the moment. I did a ton of super hero ones for someone so I was like hey anyone else want some of these while I have them out? Then my friend wanted Disney so I had those out. And everyone keeps asking for Easter so that too. 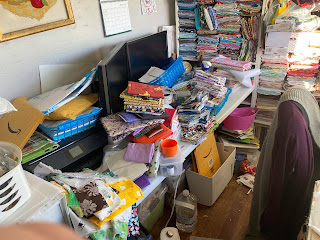 The cats pulled down my make shift curtain. After this round of masks I'm going to sew something up. I found a large tension rod that will work in this window so I'm going to use that. I notice someone took off with one of the bunny window cling's ears too. Wonder where that went haha.

I have ONE email of work to do today so I might be able to fit in some other stuff while I'm waiting for more.  But my boss if off today so the chances of more are very slim. Ok off to read blogs and act like I'm working. Hope you all have a great day!
Pin It
Posted by Julie H at 9:32 AM