Good morning happy FRIYEAH! We made it through the week (almost).
No plans for today other than I think Jess is going to borrow my car to go somewhere. Probably going to work on some laundry that's piling up.
Yesterday I cleaned off the dresser on Scott's side of the bed. He never removes anything he sets down there.
He has these pictures he brought home from his parent's house. His brother had put them in a box awhile back so he brought them home. They sat on his dad's dresser forever. I took them apart to clean the glass and snapped some pictures.
This is from the day his parents got married. His sister got this blown up super big for their 50th anniversary. His parents look so young and beautiful. His mom was only 17 here, They got married the end of January and she turned 18 in March. Of course she was already pregnant by that time! 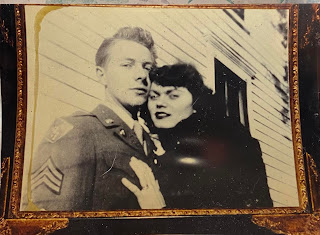 This picture is super faded so I adjusted it a bit on my phone. Helped a bit! This is his parents and baby Scott. His mom was 40 when he was born, baby number SIX! 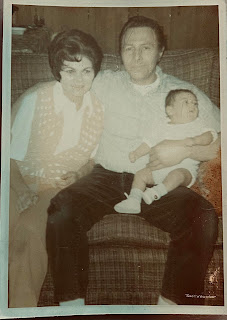 This is Scott's dad and his parents, he was so adorable! Scott's grandfather died when he was 47 years old of a blood clot. They thought it was a heart attack but it says on his death record it was a blood clot (passed on his Factor V Leiden right on down the line). 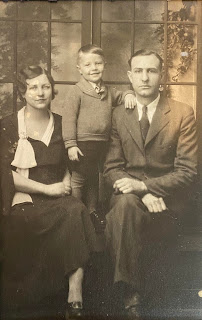 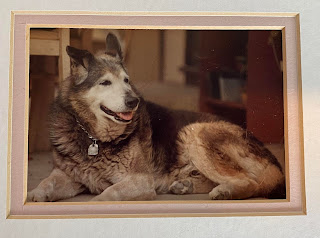 Melissa and Trevor were subs on our dart team last night so we were the all Hoffman team. I WON TWO GAMES! AGAINST MEN! That was pretty damn exciting haha.  Afterwards we hung out and Cassi came. We played one game of Cricket with everyone and Melissa's boyfriend and then the boys split off to play something else and we played some more with just the girls. 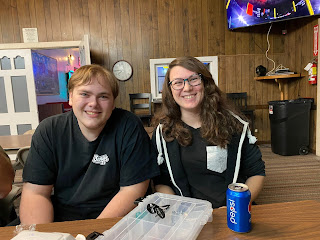 Fun times. Melissa and Trevor look a lot a like in this picture, I've never seen that before haha.
I got my time card put in and just have the same old boring letter things to work on. I see more cleaning in my "breaks" forecast ;)
I want to work on some sewing this weekend since I haven't really sewn all week. I sold almost all of the kids masks I made so I need to make some more of those. I still have some Pokémon bags and keychains to sew up first though!
There are some people making these amazing bowls out of cotton clothesline rope and fabric. I want to get some of the rope to try out. One of these days I might make it to WM to pick up some of it. Might just order some online since I hate that store.
The lady that made these is named Kathy Kirby. Look how beautiful the INSIDE is on this one. 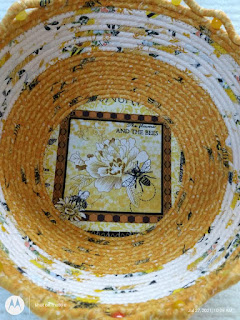 and a cute Pumpkin one 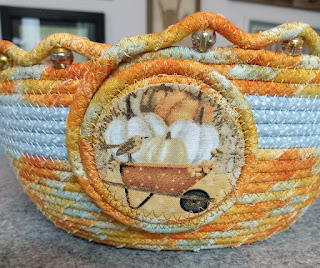 I've been seeing several people make them, it's so fun to see what people come up with.
I'm dying from cramps this morning, might have to give in and take some ibuprofen. I've been trying not to take any kind of meds besides my blood pressure meds in case anything is affecting my liver numbers. Last night I went to bed with a nightgown and sweatpants on. I had to get up at 2am and change my top to a tank top, take off the sweats and go change my under ware that are old and were stretching out haha. Needless to say I was up for about an hour trolling FB ;)
Ok guess I'll go refill my coffee cup and do something important.
Pin It
Posted by Julie H at 8:29 AM