Hope you had a fab Fourth! 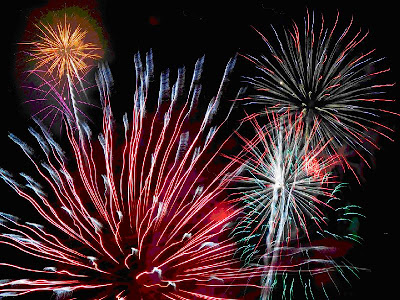 
Yesterday started off REALLY early. Friday night Scott decided it was finally time to go to to the ER to get his eye checked. He had a small fleck of metal in his eye and couldn't get it out. So we went to the ER at 9:30pm. We were finally on our way home at around 1:00am. Needless to say we all slept in a bit, me until around 8:00 and Scott finally got up at 12:30! I think that is an all time record for how long he has slept in. He is usually an early riser and gets up at 5 or so even on the weekends. He said he hadn't slept good in about 4 days. I think he should be good now!

I puttered around in the yard a bit while he was sleeping. Killing some time before going over to my brother's house. This was the first year in about 5 years that we didn't spend the holiday with our friends. Trevor called my mom and asked what time they were going over to my brother's house and they said around 2. So we left our house around 2. We got there and my dad was there and my brother's girl-friend but no one else. My brother was nursing a serious hang over and was about as much fun as a pile of rocks.

We gave up on him entertaining us and all went in the pool. Before long my other brother was there and joined us swimming. He brought his dog, a boxer, named "Rocky". Rocky was not quite sure what to think of his daddy jumping in the pool. He was nervously running and the pool and eventually slipped and got to go for an accidental swim. We all swam for quite awhile.

Eventually I climbed out and sat around talking. Luckily my baby brother brought some bags of chips since I didn't realize we were going to be eating so late and we had only had a very small meal in the morning. Eventually my sister in law got there and then finally my mom came around 4:30 or so. I felt like we were all eating in stations. We all brought our own meat so everyone was taking turns grilling, which resulted in everyone eating at different times. When we left at 8:30 my parents were just getting around to eating their tri-tip that they had brought. It seemed kind of weird to me.

I had made a Greek Saladand it turned out really good! Scott won't eat cucumbers or raw red onions so I figured it was a good opportunity to get something that I wouldn't make for at home. I couldn't find the greek dressing it called for in the store so I just used the Zesty Italian and it turned out fine. 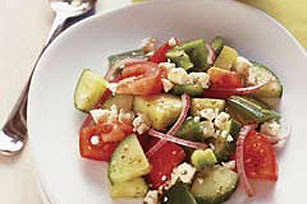 I didn't take any pictures while we were there. My mom makes such a production of taking pictures. Making people pose and do it over and such that everyone kind of gets annoyed by the time she is done. I'll just borrow her camera card and get my pictures for my scrapook.

We left around 8:30 and decided to go back to our city for fireworks. We went to a spot where we usually watch them and got lucky and no one was there. Our city did a FAB job with the fireworks this year. They were kind of short but they were AWESOME. We were all cheering and clapping when it was over. 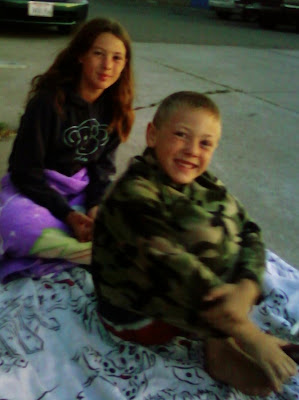 We jumped in the car and luckily got out on the main road right away and were on our way home. That is the FASTEST we have EVER got out of there. Pure luck. Usually it takes forever.

All in all it was a nice day BUT I still miss the olden days of spending the day at my Grandma's house. It's just not the same without the home made ice cream, Grandma, floating around in her pool and watching the fire works in her back yard.

I'm still hopefully that some day we will have our own tradition that MIGHT live up to the old one!Pin It
Posted by Julie H at 9:19 AM

It is hard when you have high expectations of a family event and it just isn't how you imagined or wanted it to be. Sorry your day wasn't quite how you hoped. Yes, make your own new family traditions!

Yum! Greek Salad! I'm drooling now... can't remember anything else you wrote, I have a one track mind and thanks to you, my only thought today is: Greek Salad!

WHAT?!
No pics. I just take the camera and snap pics of people randomly sometimes. Then they won't cry about "do overs".
Glad you had a good 4th.
And yes, it was a little weird that everyone ate in shifts...