Sunday was book club day!
Our book that we got back in November
(we don't meet in December)
was
The Belly Dancer 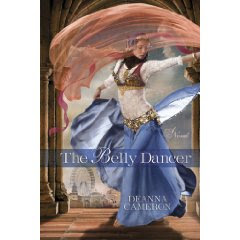 (from the Amazon site)
From Publishers Weekly
While Cameron depicts with accuracy and sympathy the very real plight of women in 19th century America, uneven pacing and character development weaken this debut. When the World's Fair arrives in Chicago in 1893, women are sexually repressed and strictly ruled by their husbands. Newlywed Dora Chambers goes to great lengths to keep her banker husband, Charles, happy, even ingratiating herself with a dreadful group of snotty socialites who oversee the decorum of the fair's more exotic exhibits, like the popular Egyptian belly dancing attraction. Dora is given the task of toning down the Egyptian dancers' act, strikes up a friendship with the troupe, and together they appease the outraged female population by modifying their dance and adding scarves to disguise their curves. Dora's husband, impatient with her virginal fear of the marriage bed, quickly resumes relations with his powerful and rich mistress, a widow who despises Dora and knows the secrets that can ruin Dora's social standing. Despite the intriguing subject and historical period, Dora's startling transformation under the tutelage of the dance troupe feels unreal, even though the story is based on fact.
Copyright © Reed Business Information, a division of Reed Elsevier Inc. All rights reserved.
I actually didn't finish the book because I just couldn't get into it. After listening to everyone at book club I've decided to try and finish it up. Everyone said the beginning was a little slow but it got better. I know my neighbor didn't like it at all though! Everyone else seemed to think it was good and the woman that picked it thought it was AWESOME. She's about 90 I think though so her view is a little different from the younger generation. That's kind of the fun part of having people of all ages in a book club.
I did actually buy this book but it got messed up so I don't feel comfortable giving it away! Bummer.
Our book for next month is
Dewey

Which is actually my book that I let some one in book club read.
Soo I don't have to read it!
Pin It
Posted by Julie H at 6:38 PM

I have to admit, the belly dancer book doesn't sound like something up my alley. But since a 90 year old woman picked it, I guess that explains it!

Do you guys actually have real book club meetings?