Wow it's been almost a whole week since I last blogged. I'm becoming quite the sporadic poster. I need to work on that a bit I think!

Last week was spent trying to get my shit together with my eating and exercising. Then we went camping and I ate a shit ton of crap. It all balances out in the end right?

Scott didn't want to take the truck so we took the 2 cars, which have fold down seats and are wagon-like so it worked out just fine. Trevor and Snookie rode with him and Rusty and Melissa rode with me. I now have enough dog hair in my car to make a 3rd dog, but I think he was pretty excited to go for a ride. 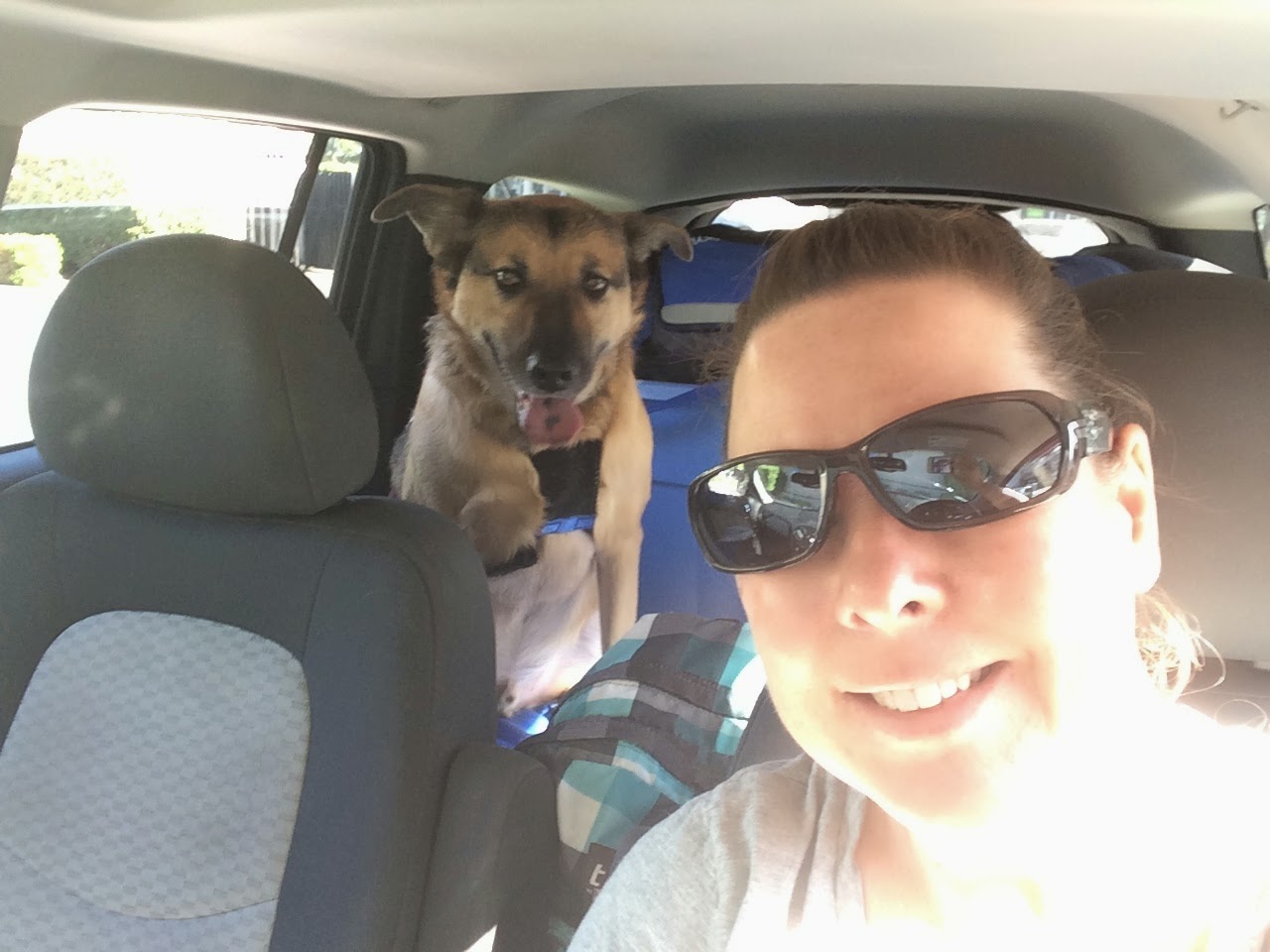 Snookie wasn't too sad either. 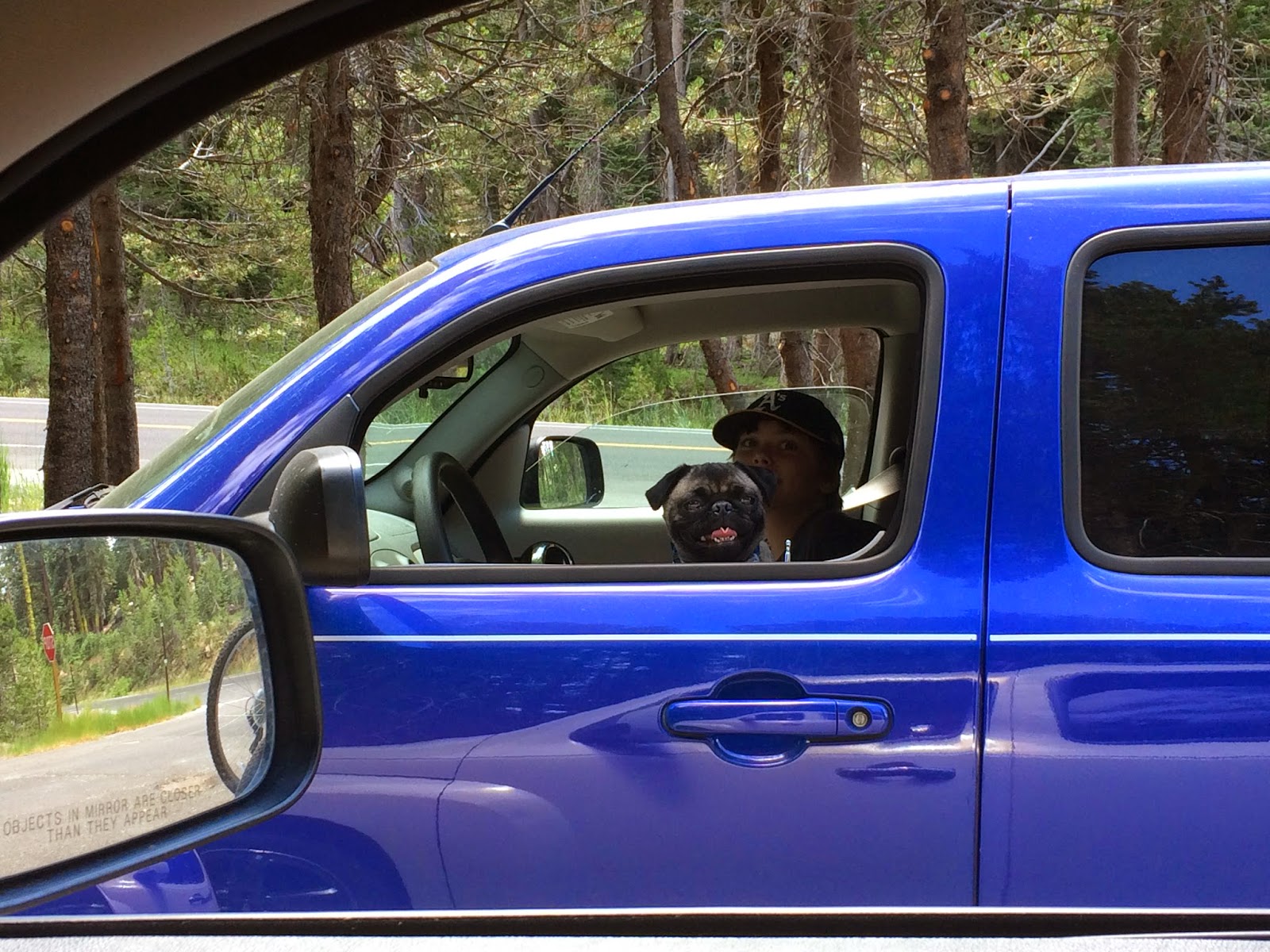 We only stopped three times on the way, once to get gas & ice right after we left, right before ranger station in Bear Valley because my bladder was going to give out and then just a bit farther down the road at the ranger station to get a campfire permit.

When we stopped in Bear Valley Melissa found these HUGE dandelion looking things. When she blew them it was like Bugs Life with them floating all around. Pretty cool. 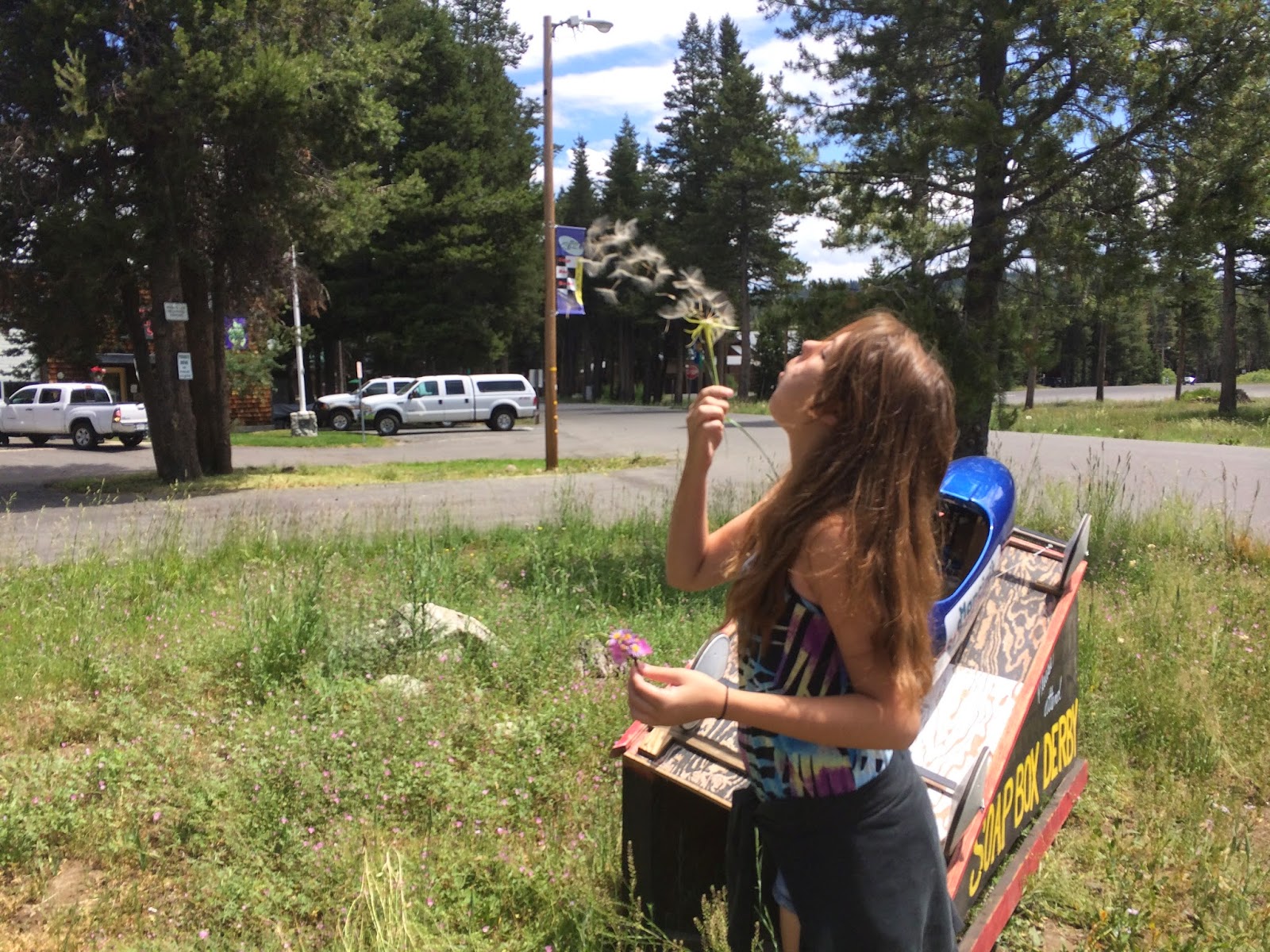 We were pretty excited when we got up to Hermit Valley and saw that our original favorite site was free! Up where we go it's free to camp, you just have to get there first. It was nice that we got there when it was still light out so we could take our time unpacking things and setting up the tents. 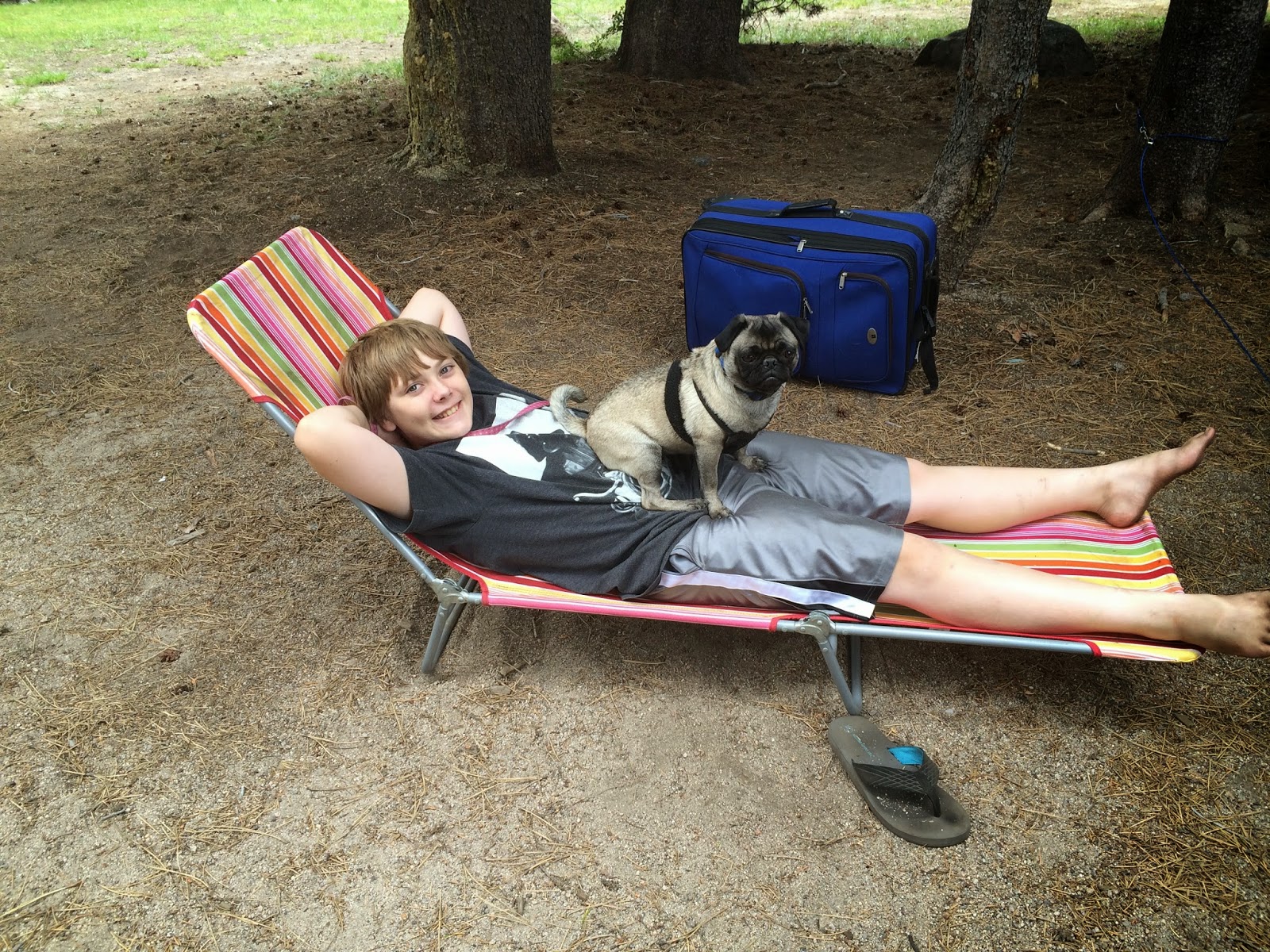 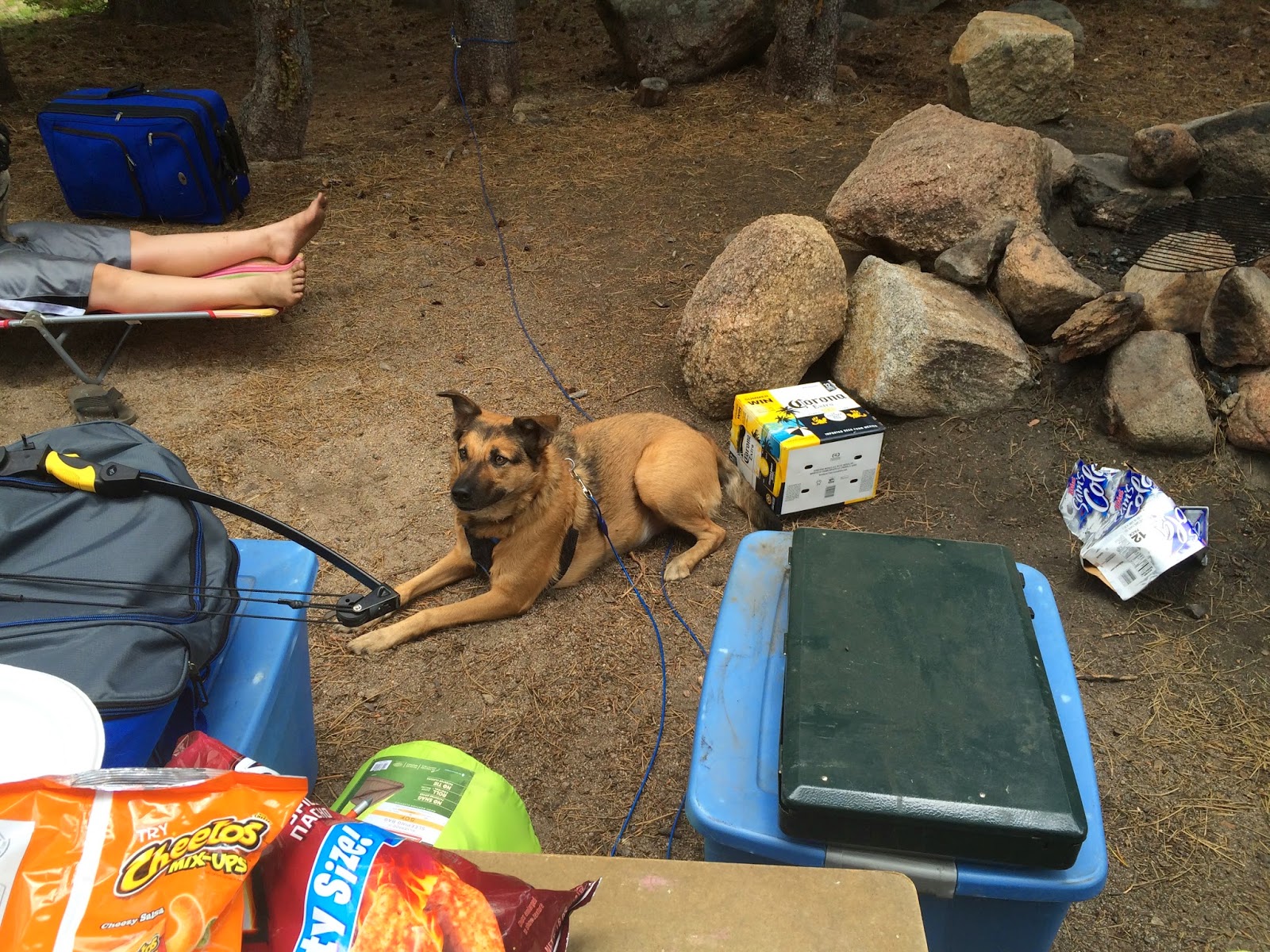 The kids each had their own and so Scott and I had our own. Or so we thought until it got dark and Trevor changed his mind and climbed into ours.

For dinner the first night we had hot dogs and brats. I tried to come up with stuff that would be easier to cook this time. We made them over the campfire, which was super nice! 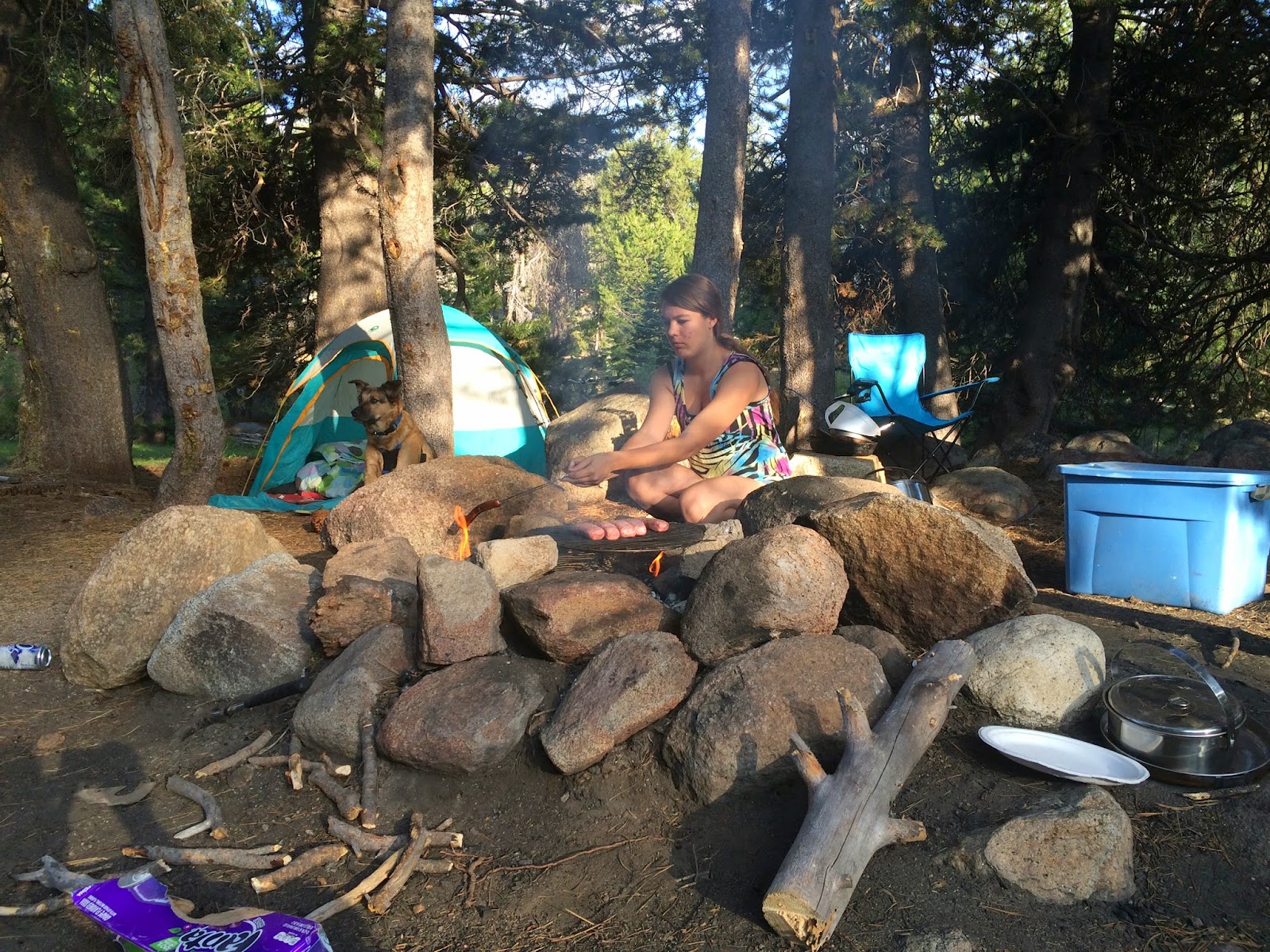 and then we had smores for dessert of course. Scott kept saying we needed to wait until it was dark but I didn't. I had stayed up until 2 am the night before getting everything ready to go camping and I was totally exhausted. Yes that's a Reese's s'more. It tasted just as heavenly as it looks. 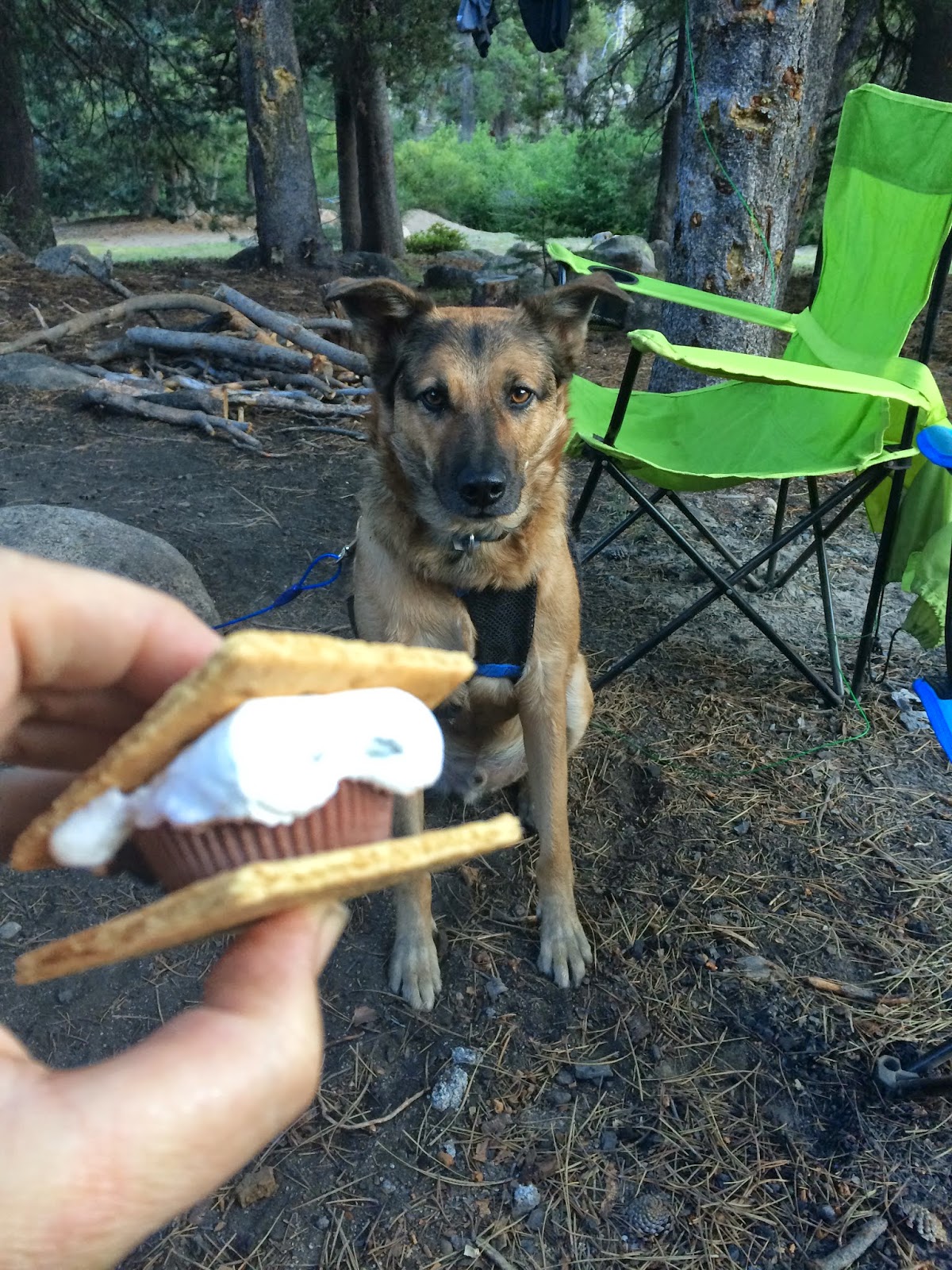 I pretty much begged off and went to bed after it got dark.

The next morning we had breakfast burritos. Scott did all the cooking while we were camping it was great!

We were still eating breakfast when the first of the Death Ride riders started coming down the mountain. Part of the reason we went camping this weekend was so that we could watch the race. Scott knew two guys that were riding it (they ride the train with him).

We pulled our chairs up closer to the road and watched and waved. 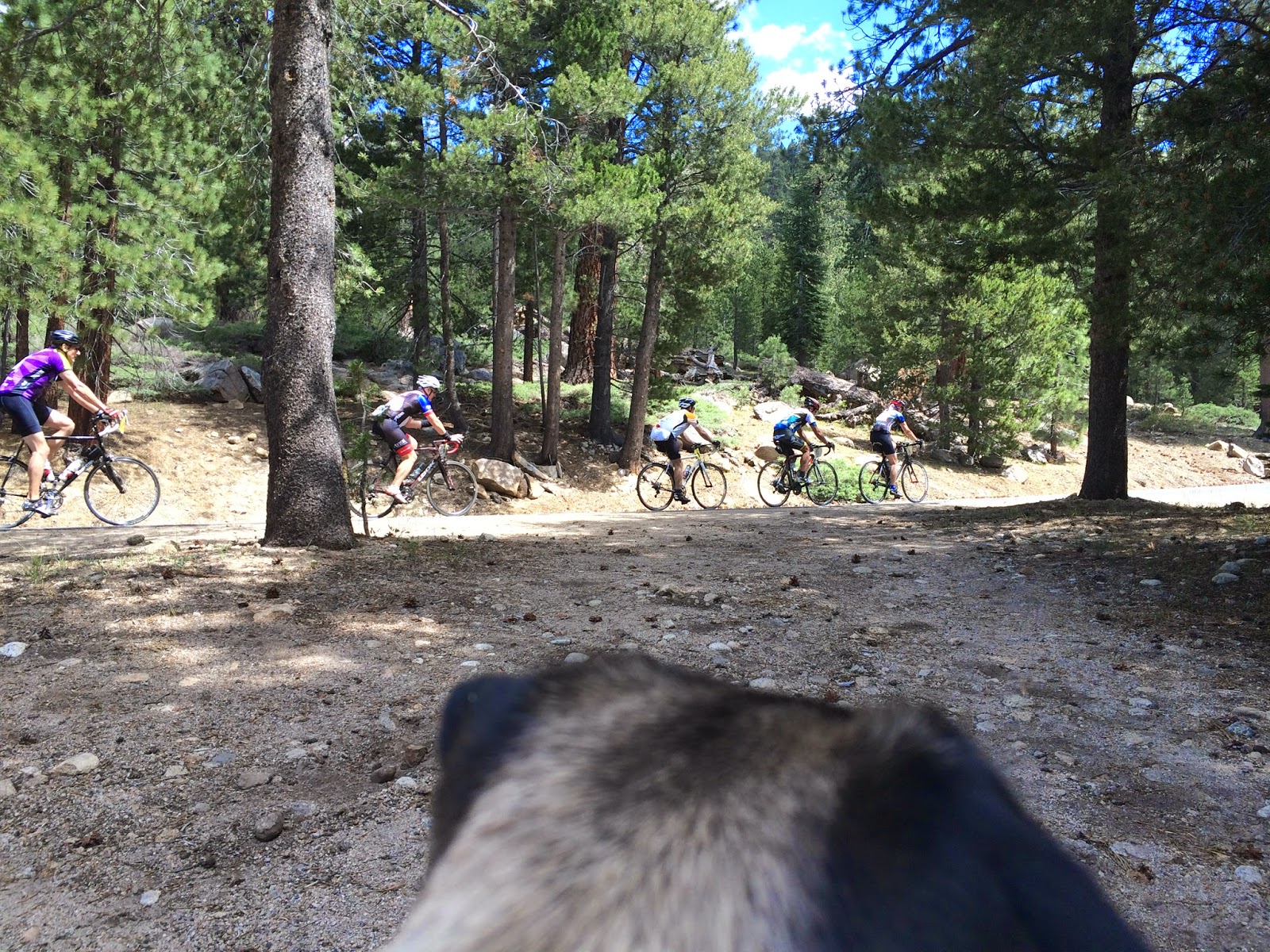 When it was over Scott and I rode bikes down to the bathroom (downhill) and back (uphill) for .7 miles each way. That was enough for me.

For lunch we had sandwiches and then we took a little walk back to the "beach" to play for awhile. 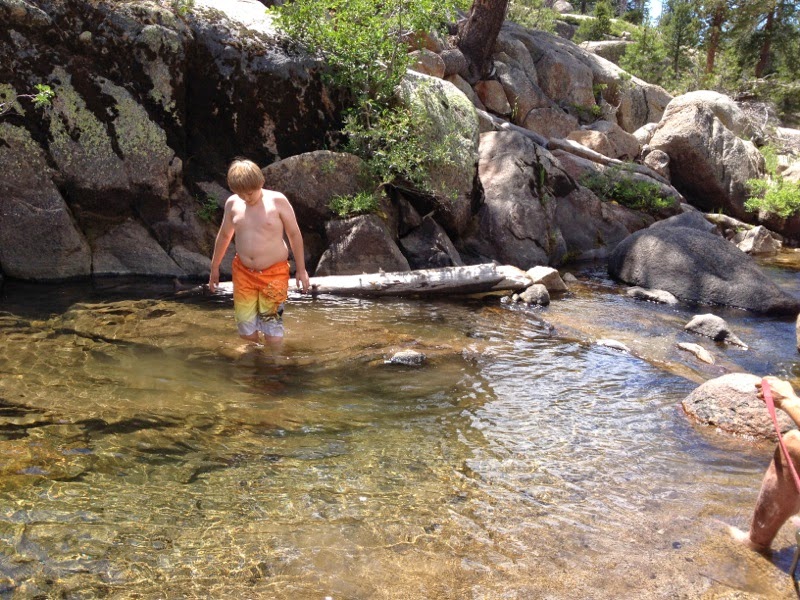 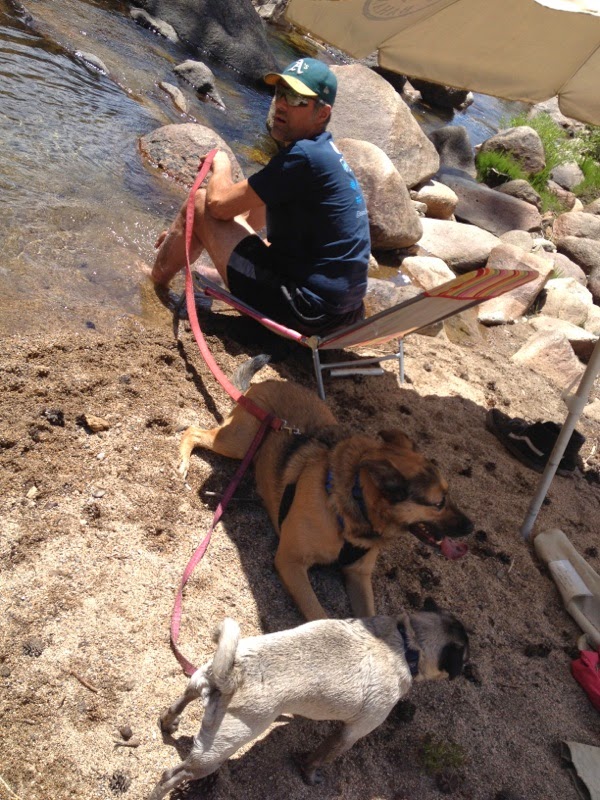 I pretty much took over that there folding chair and laid under the umbrella while we were there. Trevor asked me why I wasn't playing. I said to me that was my version of play lol.

When we came back we played a few rounds of rummy and then Scott made us dinner, hamburgers and Italian sausage, followed by you guessed it, more s'mores!

Sunday we got up and had pancakes and bacon. Sounds like all we did on our trip was eat and you're right! 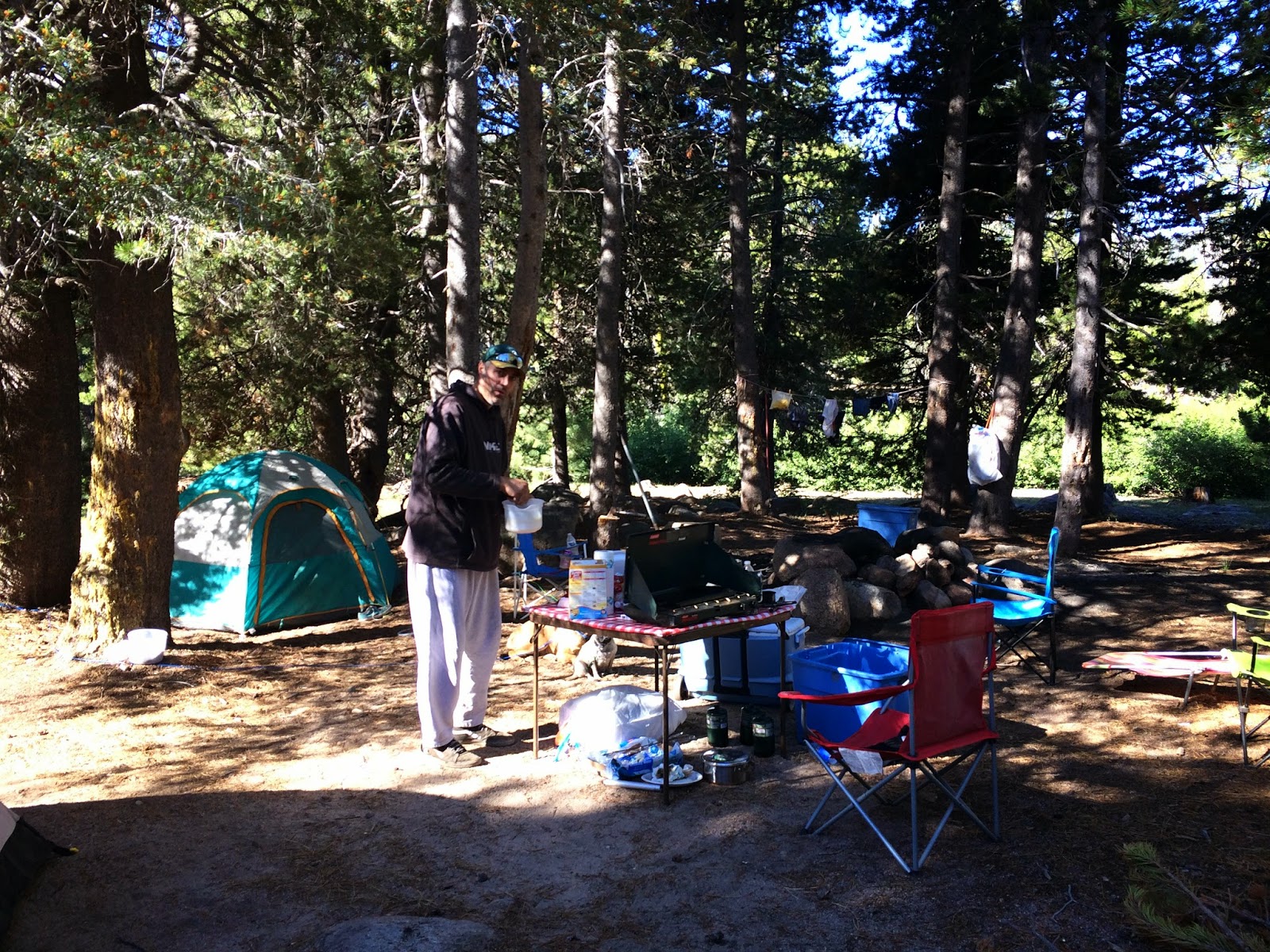 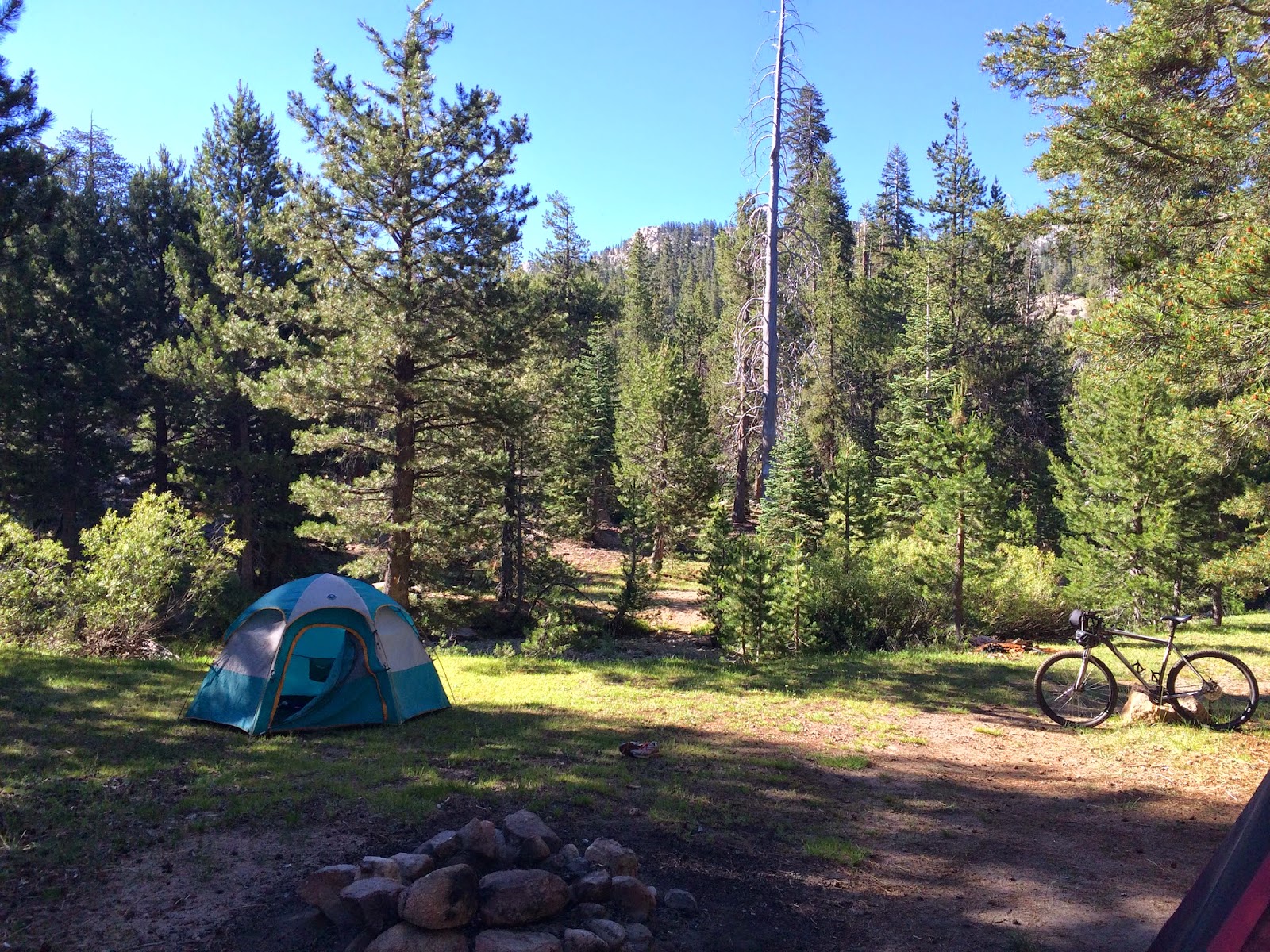 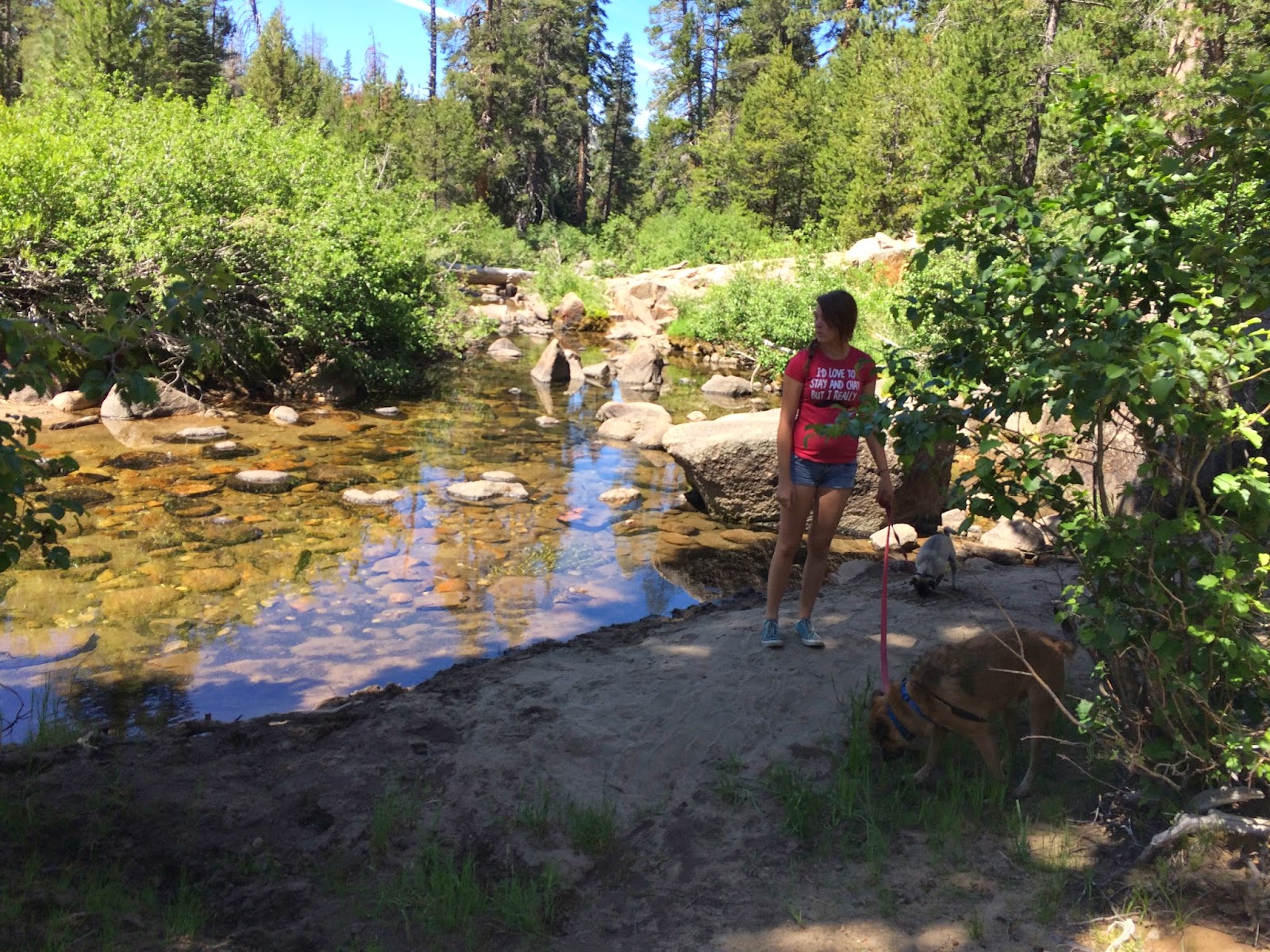 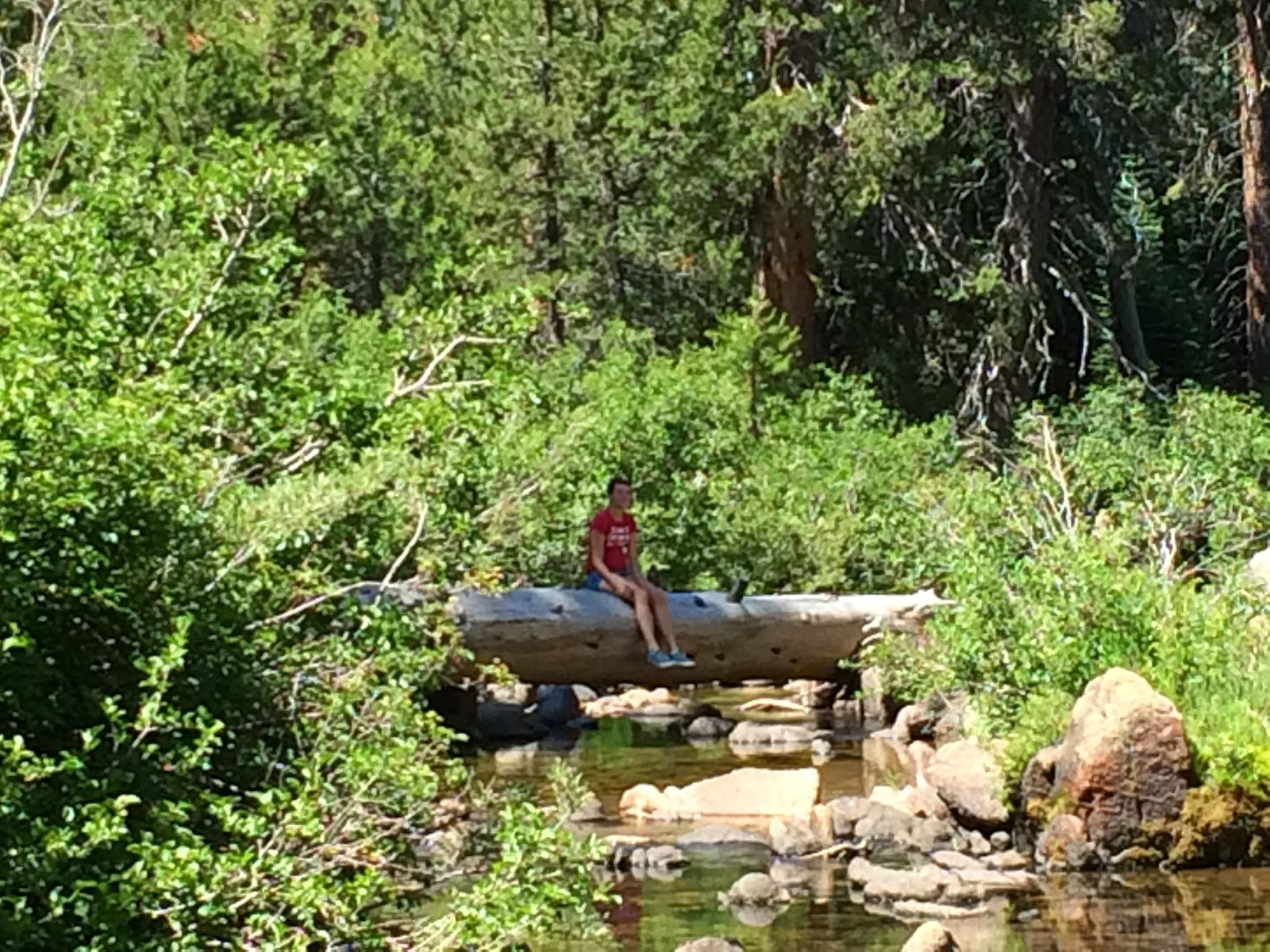 It's just so beautiful there. Even if you aren't doing much it's nice to just sit and relax and enjoy the area. Although I've decided that camping would be a lot more fun if there were no bugs or dirt.

We were on the road by 11:30 and back to 100 degree temps. We stopped in Angels Camp for lunch, well kind of , we went through the drive thru since we had the dogs but it took so long I had to turn off my AC since it had started to just blow hot air. Ridiculous.

This is my least favorite part of the drive through Copperopolis. it's just so blah. Well except the clouds were kind of cool. 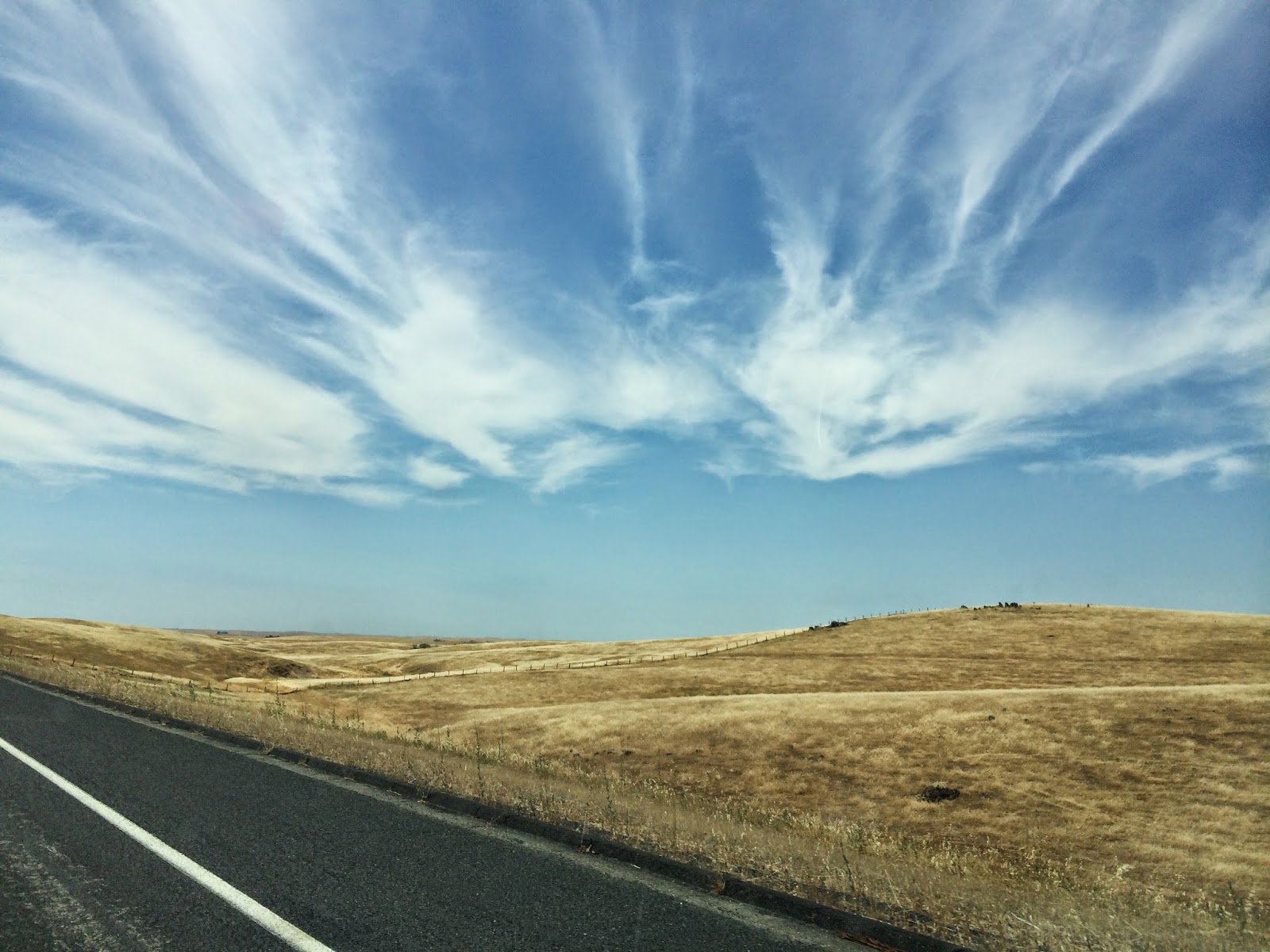 Once we got home I hit the couch until it was my turn for a shower. Ahhh the best part of coming home.

If it didn't take so long to get there and back I'd go again this weekend. Well, if my bug bites go away by then ;)

The photo of the dog staring at the s'more is hysterical. Oh my is he ever focused!!

You always manage to make camping fun... shame Stew and I don't think camping is something we would like to do! lol

I'm not even into camping, but this trip looks like you had a fabulous time --- I kept thinking, "I could go somewhere like that and camp!" And I hate to say it... but Copperopolis looks like most of where I live in South Dakota! Haha!