I'm pretty much feeling exhausted today. I'm pretty sure that's not good English either but that describes how I feel.

I've been getting up at 5 am to go run. I fell off my running routine awhile back and nothing seems to be working to get me back into it so I decided I just need to make myself run (no walking!) at least a mile every day. So far today was the first day I "only" ran a mile since Sunday. I might have went farther, but I was giving myself the excuse that running without headphones really sucks so I'd just do a mile. Melissa keeps borrowing my headphones since hers broke and I forgot to tell her to leave them on the table for me.

I'm really, really not a morning person. Scott leaves around 4:30 every morning and gives me a kiss goodbye (even though I've told him it's totally ok if he doesn't wake me up to tell me goodbye) and then I usually lay there nodding in and out until about 5:45 when I go into a deep sleep for 15 minutes lol.

So since I'm usually kind of awake anyways I've told myself that I need to just get up and go run. I've declared that I will run at least a mile a day on Facebook and Instagram so you know, that means I actually have to do it so I don't look like a liar.

I've determined the only good thing about running in the morning is that it's done and I don't have to think about it anymore. It's REALLY dark at 5 am. It's dark when I run at night too but for some reason the dark in the morning makes me more nervous. Weird. 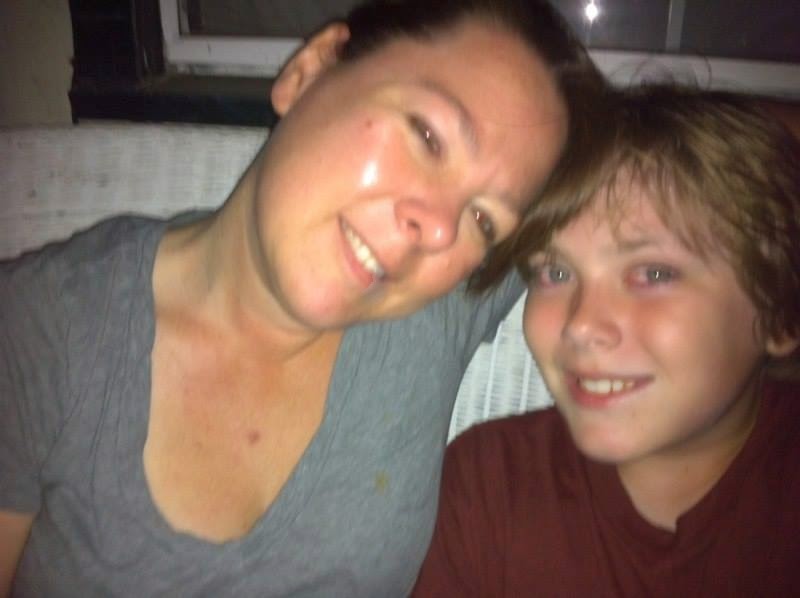 I've also been going for a bike ride every day with Trevor after dinner. He's decided that he wants to ride 5 miles every day. We set up Runkeeper on his phone and he's been using it for his bike rides. He even set a goal for riding 1200 miles for the year. I'm impressed!

I REALLY need to get a more comfy seat for one of our mountain bikes though. The ones we have have been really killing my ass and I've been trading them around all the bikes (we have a collection of bikes for some reason) trying to find one less painful. I'm pretty sure one does not exist at our house and I think I need to just go buy one. I'm pretty sure your crotch is not supposed to be numb when you get off the bike.

Other than the seat pain I've been enjoying riding with him every day. It's nice to have some time to gether doing something.

With the running and the biking I haven't went to the gym. Seems like something always falls off when I pick something else up.

Saturday is the Color The Skies 5k run I'm signed up for and I'm feeling hopefully that maybe I can run the whole race. Last year I was trying to get a sub 30 minute run, which I just barely missed (but later smashed). This year I'll be lucky if I get a sub 35. It's amazing how much you lose in your endurance and speed when you take a break from running. Hopefully if I stick to it I can get back to where I was.

I'm glad that I gave myself the rule to do one race a month though. I'm sure I would have totally stopped running if I had not done that. Who would have thought when I was running so much just a short time ago that I would have stopped? Weird how that happens. I think I was just exhausted from doing all the long runs and then having a lot of emotionally taxing things going on at the same time. Somehow just laying on the couch seemed so much easier ;)

The important thing though is that I am attempting to pick myself up (again). If I keep trying eventually I'll succeed right? Pin It
Posted by Julie H at 9:40 AM

Keep at it lady, sounds like you're not doing too shabby at all.

I don't run but go to the gym. My gym no longer has hours in the am when I want or need to go.
Now the hours are for the unemployed. 9am - 7pm.
Who the hell can make that?
I work. And at 6pm when I'm done rushing to the gym isn't on my list of priorities. I prefer working out between 5:30 - 6am. Then go to work. But the evenings - well they suck for my lifestyle.

It is incredibly easy to stop running/going to the gym... I have done it! Not running though, I can't run to save myself. You probably don't like the dark in the mornings because there's no one else around, they are all in bed!