Way back in the middle of July we went camping up in Hermit Valley again. This year we didn't plan to go during the Death Ride but somehow we just picked that weekend again! Which was nice because there wasn't any cars driving up and down the road on Saturday. 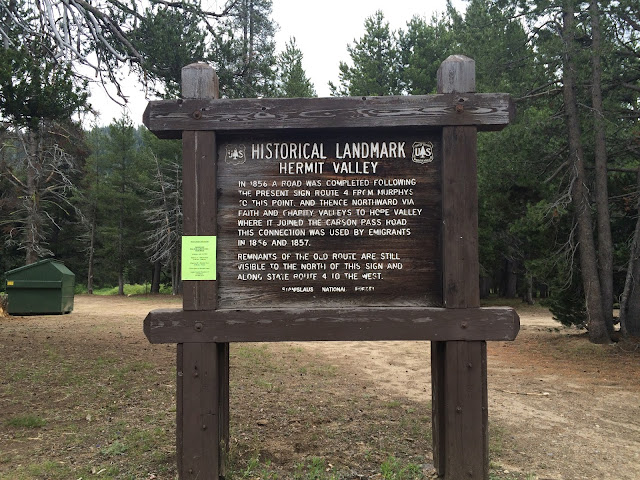 So we packed up our 2 cars and the boys went in one and the girls went in the other. But we had Rusty with us and Snookie rode with them.  I stole this picture from Melissa. 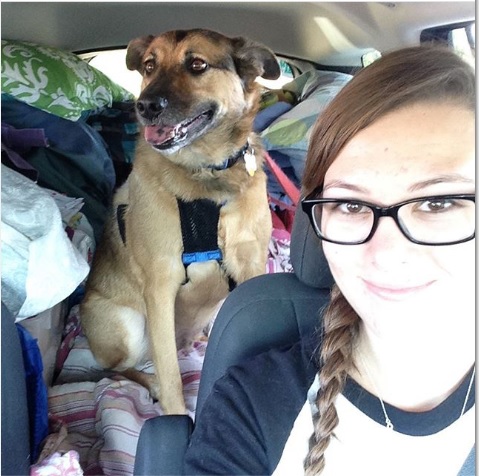 Scott had worked part of the day and I think I had taken the day off but now it's been awhile so I can't remember lol but we didn't get on the road until dinner time. When we were going through the windy part of the drive Scott said that Snookie was acting like she was going to get sick. Not too long after that he was flashing his lights at me to pull over. Snookie had puked all over his back. I, of course, laughed my ass off. He didn't think it was funny though haha. Lucky for us I had packed some baby wipes so we could wash things up a bit. She made it the rest of the way and then puked right when we got to the campsite on Trevor's foot haha.

There was hardly anyone up there camping, which was odd! But soon we found out it was because it was freaking FREEZING at night. It had actually rained a little bit before we got up there so all the wood on the ground was wet and made starting a fire pretty much impossible.

Scott had tried to make one Friday night and Saturday morning and after MANY MANY attempts and a lot of swear words he finally got one going. Then everything dried out and it was fine the rest of the time. 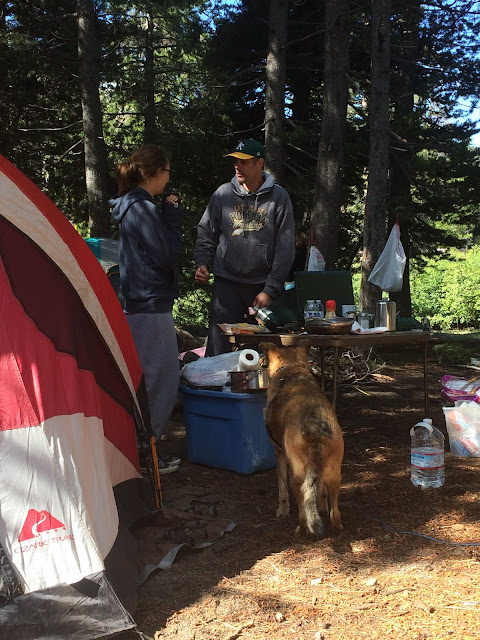 The first night was so incredibly cold. I had brought an extra blanket for the dogs which ended up being on top of me, along with the dogs in my sleeping bag. I think I slept for about ten minutes. The second night I got smarter and wore my whole suitcase to bed. Just kidding, but I did have 4 layers on including my jacket. It warmed up during the day, just enough to get my face nice and crisp.

Saturday we mostly just sat around because we were so tired from not sleeping. We played a bunch of games of cards, which we always do when we go camping. And we ate like 20 times I think!
At one point I took the dogs and walked down to the porta potties (.8 of a mile) through all the bike ride festivities and back and then after the bike race was over I did my mile run by going 1/2 a mile down the road and then back. 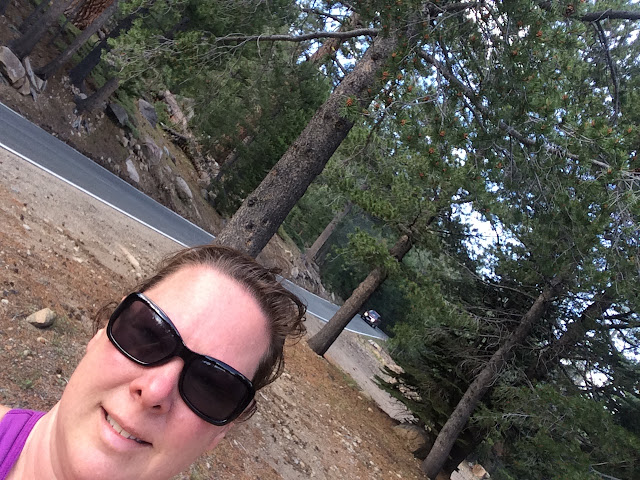 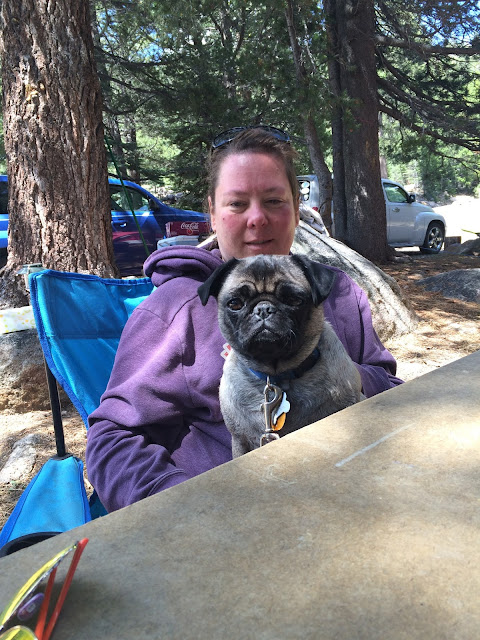 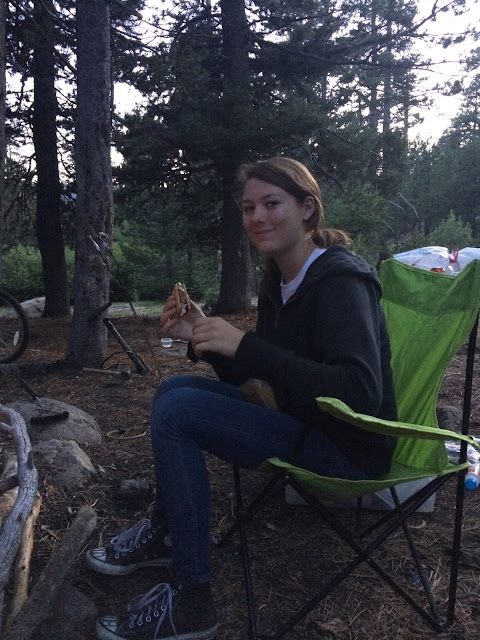 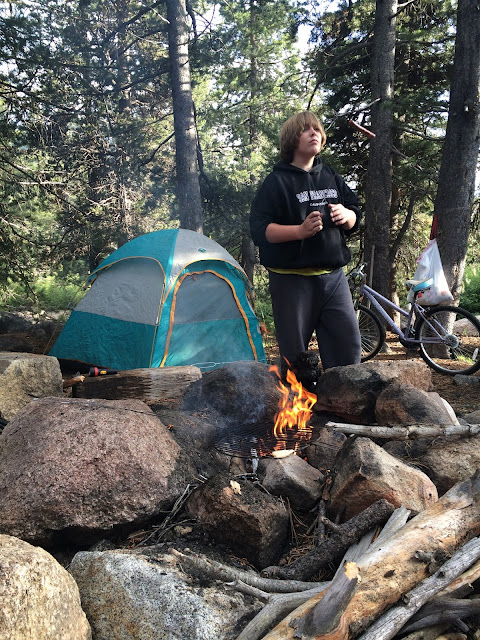 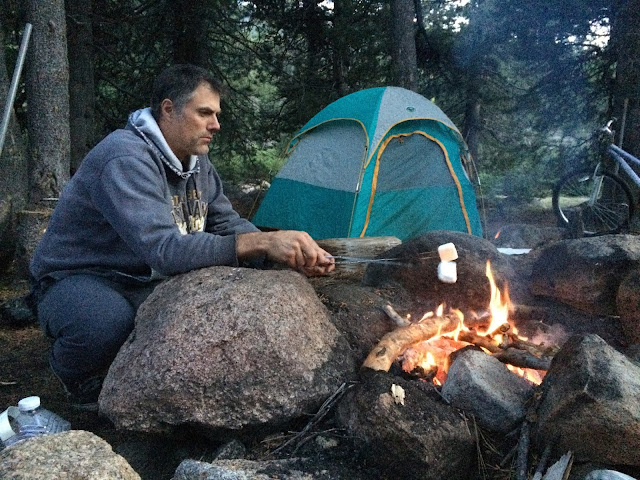 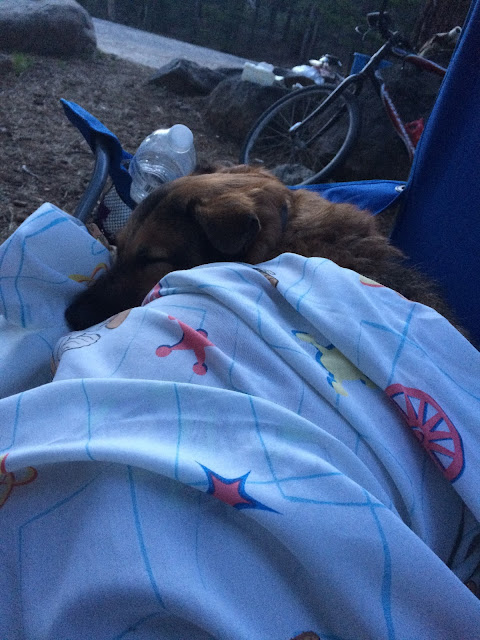 Snookie kept shivering so I put her inside my jacket lol. she actually stayed in there for quite awhile! 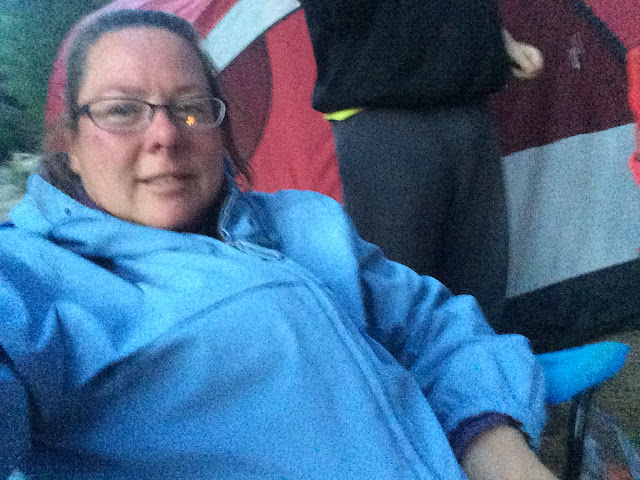 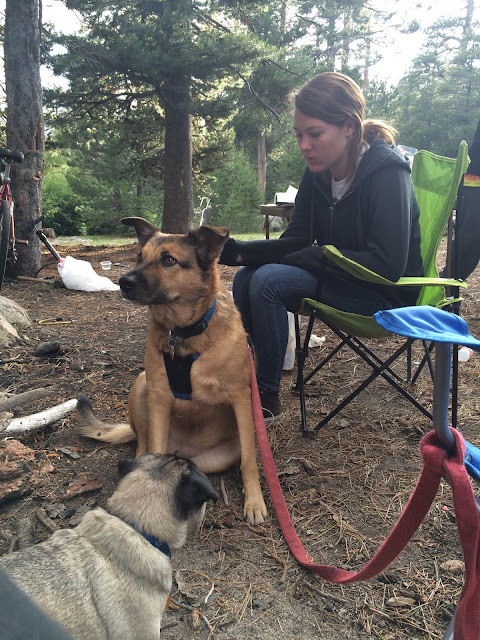 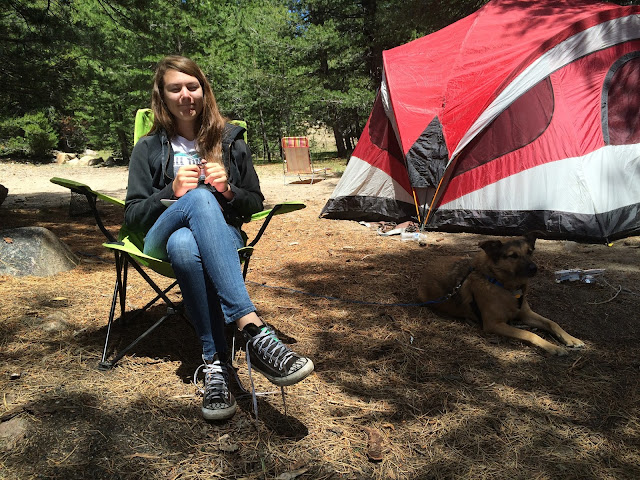 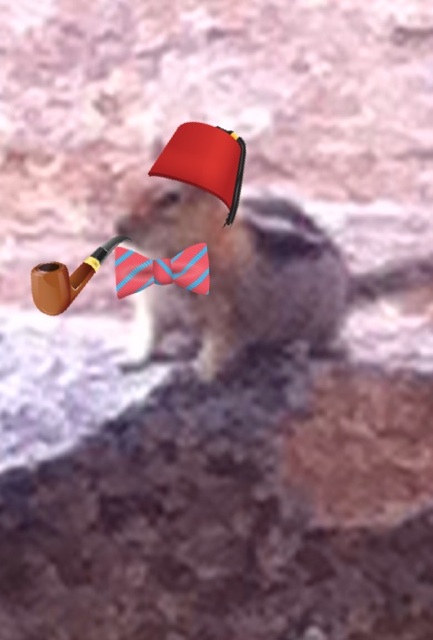 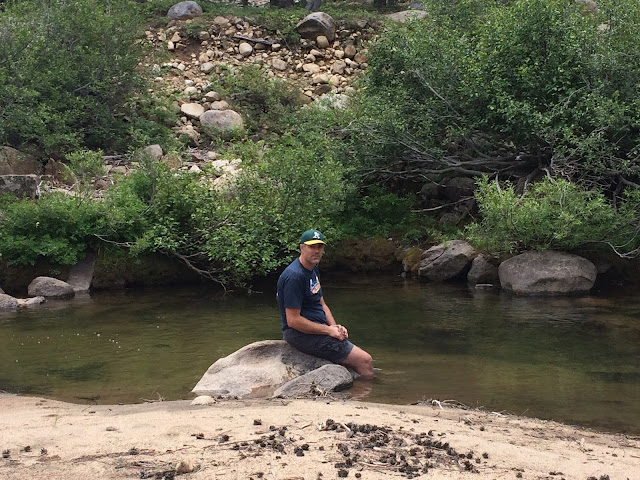 The dogs had fun running around 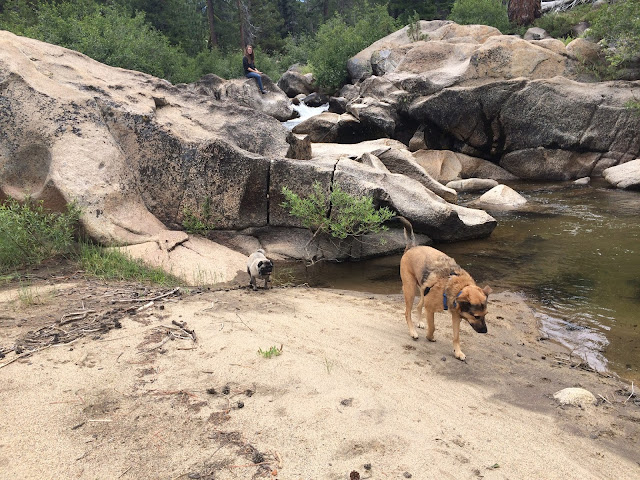 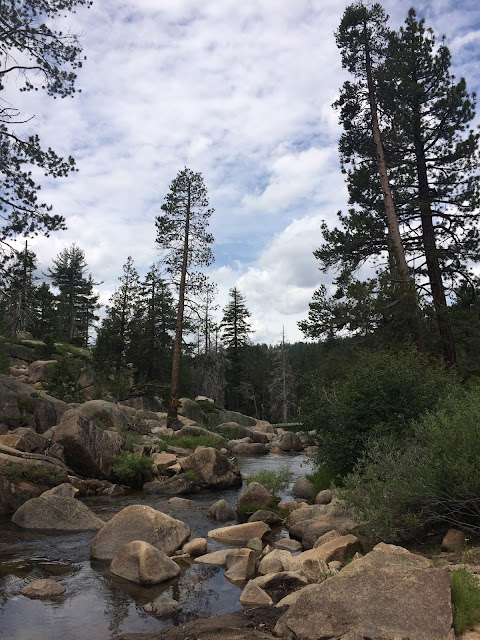 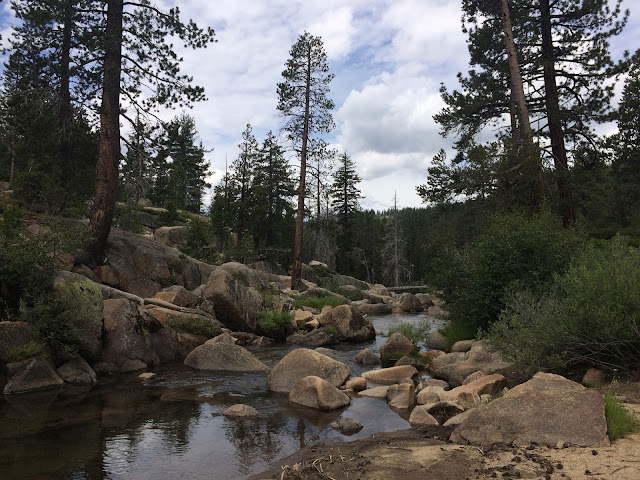 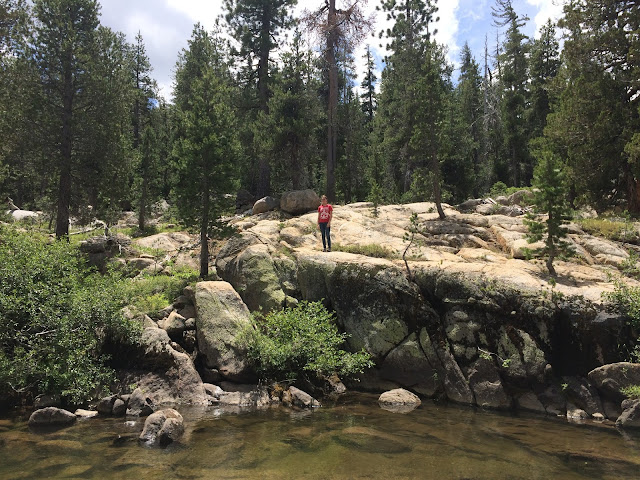 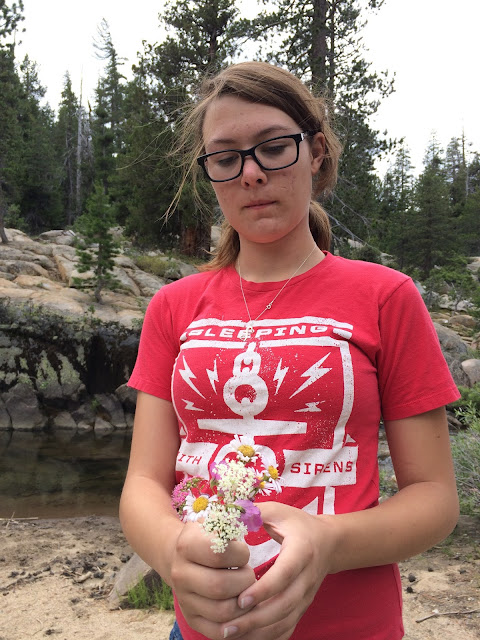 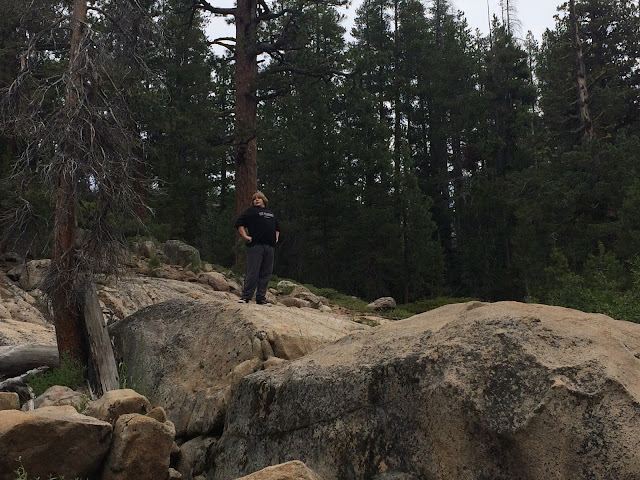 Getting my forehead burned some more (stole Scott's hat after this!) 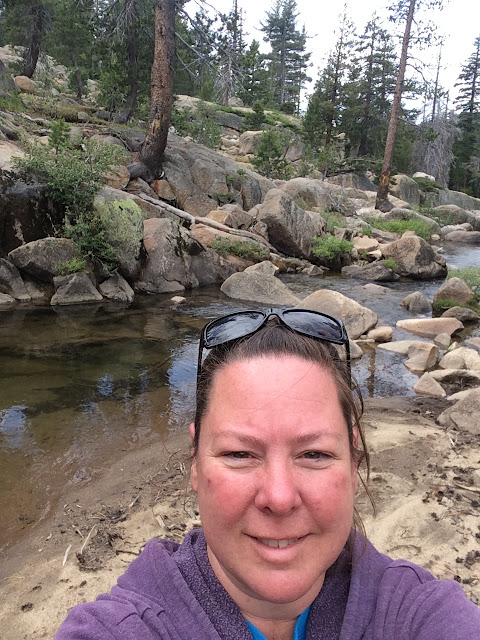 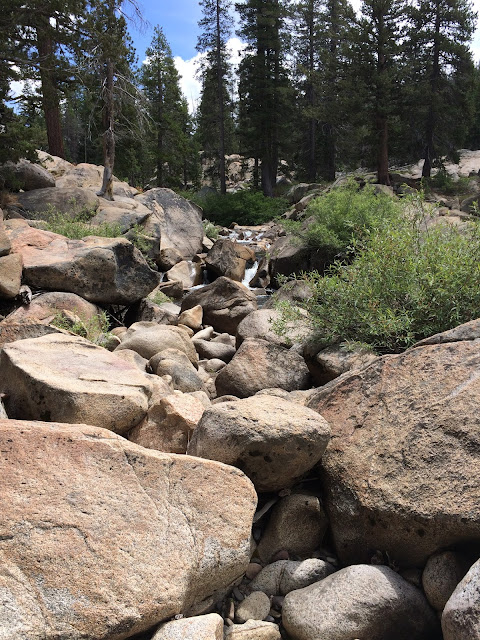 After awhile we decided to go walk around some more and we found a ton of campsites we didn't know about. Sadly most of them are hike in so not very realistic with a family and how much crap we take camping. 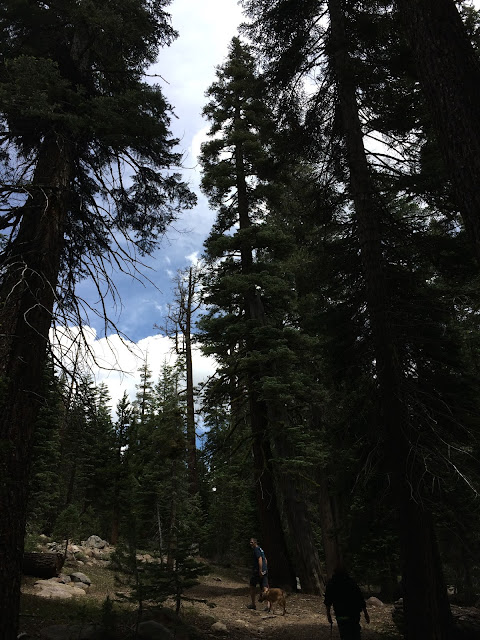 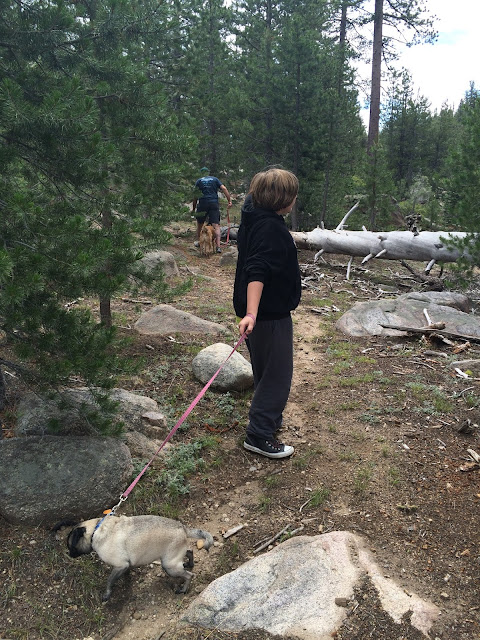 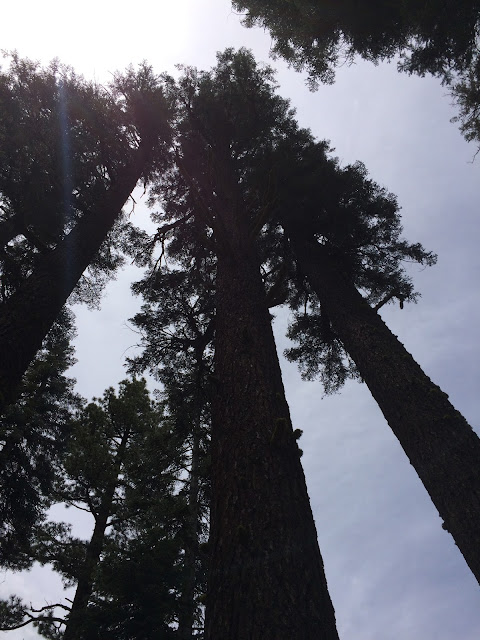 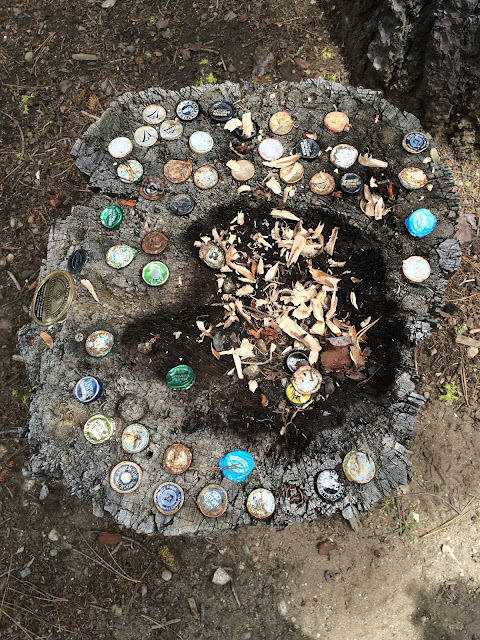 And then we had some lunch, packed up and drove home! Short camping trip but it was still nice to get away. I wish we could go back before summer is over!
Pin It
Posted by Julie H at 6:00 AM

Awesome family time and nature time-looks like a great trip! Ps- I love the chipmunk!

I need and want to go camping!