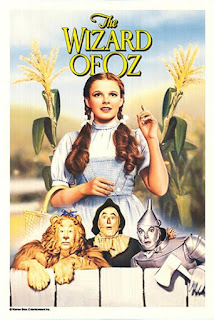 Ugh so I totally had the sweats last night, which was messed up because I thought I was fever free all day yesterday. Apparently not. I just took my temp and I'm still running a low one. Sucks.

I have plans today to go see The Wizard Of Oz at the old downtown movie theater. Originally it was the movie theater that my mom went to when she was a kid. When I first moved here as an adult it was closed and since then has been remodeled. They do plays and concerts and such there. Jessica played there when she was in band.

My friend Traci LOVES all things Wizard of Oz (her mother was a huge Judy Garland fan) so when I saw this pop up I immediately thought of her. I thought originally that it was a play but then she figured out that they are just showing the movie. Which is still cool. So we are going to go to lunch and then watch the movie. My Mom, Melissa and one of Traci's friends is going too. I hope my body is up to it. I'm on antibiotics so I shouldn't be contagious to anyone right?

Scott went to the A's game today with some neighbors. Originally I was invited to but then I got told they only had one ticket left so he's going. They all go really early and tail gate but I make him take BART (the train) because I don't want him driving home with people who have been drinking all day. I'm sure he will have a great time!Pin It
Posted by Julie H at 10:25 AM

I'm getting caught up on my blog reading since vacation.
Hope you are feeling better!