So after the Enchanted Forest my GPS on my phone was being a total A HOLE and wouldn't re-route from the Enchanted Forest to the hotel in Reno we were going to. Finally I had to get it to do from my house at home to Reno and then change the start from where we were to Reno (not the hotel address) and it started working. I picked the "shortest" trip that came up which was 9 plus hours.That SEVEN HOUR trip? Didn't show up lol 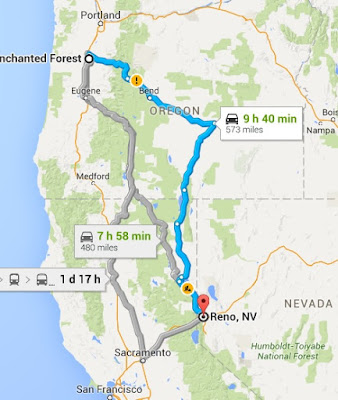 I drove awhile and then we stopped for dinner around 7 or so. I had 2 cups of coffee (good thing), we filled up with gas and it was all good.  UNTIL we got in this FOREST AREA. Which of course, I kind of had to pee. I couldn't drive all that fast because the road was twisty and turny and dark and HELLO DEER who we I stopped for so he could prance across the road. Thank God I had music on my phone that I could play in the car or I might have went a little batty.

I was so excited when we FINALLY got out of the forest. Right to a Chevron with the most beautiful disgusting bathroom. I was so happy to pee somewhere I didn't even care that someone just put their cigarette out in the toilet water.

We all got a little stretch out but not too much since it was a bit sketchy out there and then it was only another 20 minutes or so to Reno. Originally we were going to go to see my mom's uncle but he ended up having other plans. I already had the reservation there so we decided we'd just go anyways since there is this cool antique store that we went to the last time we were there. About midnight 30 I was thinking maybe we should have just asked for ONE MORE DAY off work so we could have split this ride up a bit more.

We got into Reno and I drove down the strip and made a right on 2nd street, which I thought was the way to our hotel, the Grand Sierra. I had never been there before but I got a great deal. Of course I should have made a LEFT instead of aright if I wanted to end up at the casino and not a scary industrial park area. Another turn around and mapping and we finally got into the hotel. I had called when we stopped for dinner and told them we were going to be a really late check in. The woman on the phone said that was fine and had put that we could check in until 3 am, which was really nice.  When I checked in the gal said they were out of regular rooms so we got upgraded to a suite. Which was nice, but other than the kitchen type stuff it wasn't all that much better than a regular room would have been.

We went to bed and ended up staying in the room until check out because we were all tired and Melissa was sleeping forever. SO we didn't actually end up spending any time in the casino part. It seemed really nice walking through though lol. 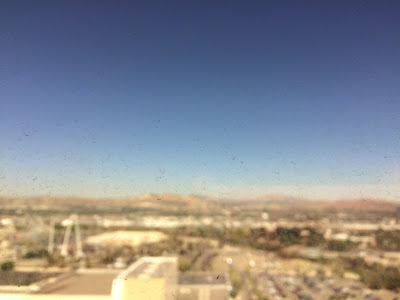 We loaded up the car and then went over to the Eldorado for the buffet breakfast/lunch and then after that we went to the big thrift store where I found NOTHING to buy. My mom found this kid's iron rocking chair though. I told her she was going to have to sit with it on her lap though lol. Amazingly she somehow squished it in the car.

When we got to her house we hung around a little bit and then it was back on the road another 40 minutes home. I was looking forward to just sitting when I got home but my house smelled like a giant cat box and was totally wiped out so I ended up doing some cleaning. Lucky for Scott he came home and did the dishes on his lunch the next day or I might have taken another road trip and not came back ;)

All in all it was a great trip but I could have used at least another day in Oregon and definitely another day to drive home! Next time I will need to save up more vacation time!
Pin It
Posted by Julie H at 5:00 AM

sometimes one needs a vacation after a vacation.
:-)
The book choices were good too - just couldn't leave a message there.
I too am finding I got carried away on my vacation and trips this year and my jeans are snug and uncomfortable. So back on the damn wagon! no drinking either and sometimes for me that is harder than giving up the food. :-)