Driving Across the Country

So as I mentioned before my mom and I took a "quick" ride across the USA to take my daughter a car. This is the reason she needed one.


She was just driving down the road in this car 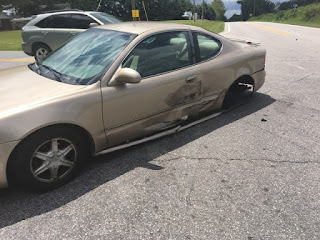 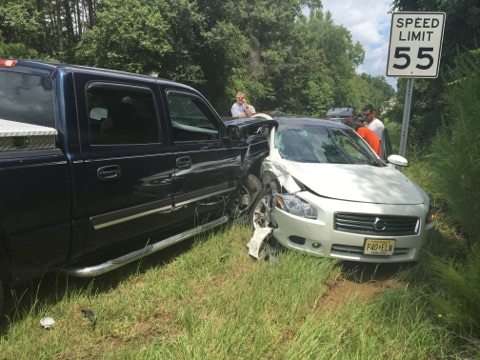 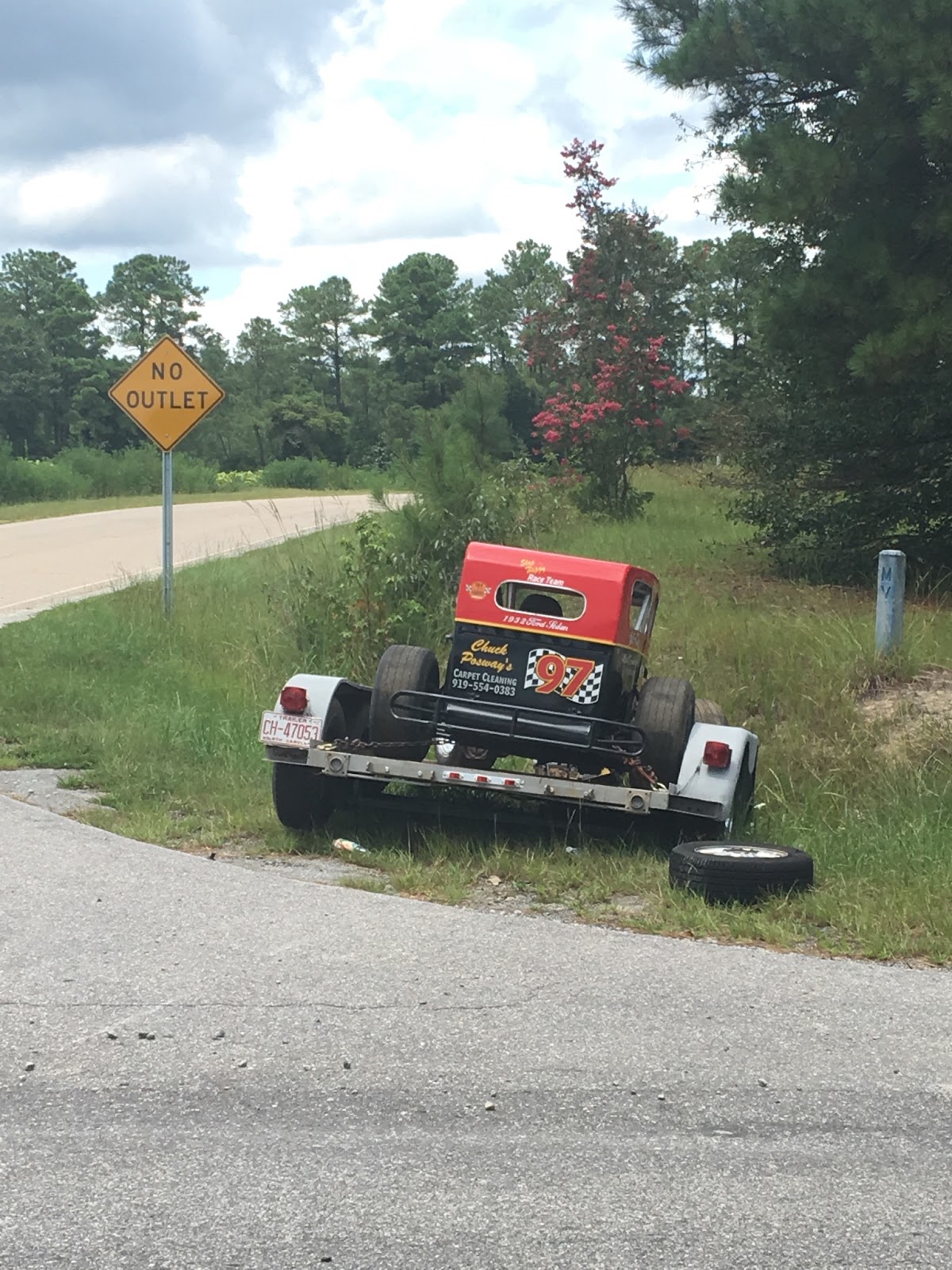 She was luckily not hurt but the car was totaled. The car actually belong to her girlfriend who would need to use the money that she would get for the car to put towards bills. Originally I bought the blue HHR we have for Jessica anyways so I figured she should have it. I had four days of vacation time I could take so I figured if I put that around  a weekend it just might be doable! My mom volunteered to come with me when I told her my crazy idea so we did it! 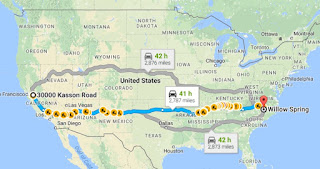 
I was thinking we'd leave early in the morning on Wednesday but my mom had some landscaper guy coming to give her  a quote on her little side yard project she wants to do. The guy is supposed to come "somewhere from 9am to 11am". Yeah so you know what time he got there right?


As soon as he finally showed up I started packing all my mom's stuff in the car (she wanted to wait until we left to pull the stuff out of the refrigerator and put it in the cooler). So we were finally on the road at about 11:15 or so. Of course we had to stop and get ice and get gas before we were really on the freeway. Delay, delay, delay. 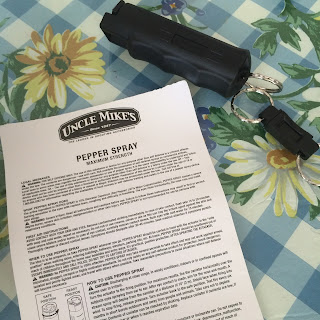 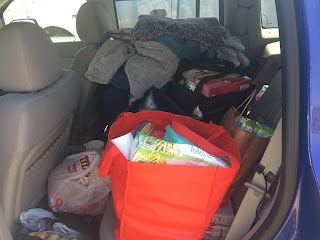 I was so glad when we were finally on I-5. We made it to Kettleman City before we stopped to stretch and have a late lunch early dinner. We were driving down the road when we spotted this Bravo Farms place. Sooo cute! We decided to eat there. We got out of the car and it was like 150 outside so we ate inside, but they had this cute area outside that would be great for kids when the weather is nicer. 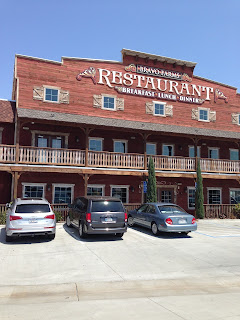 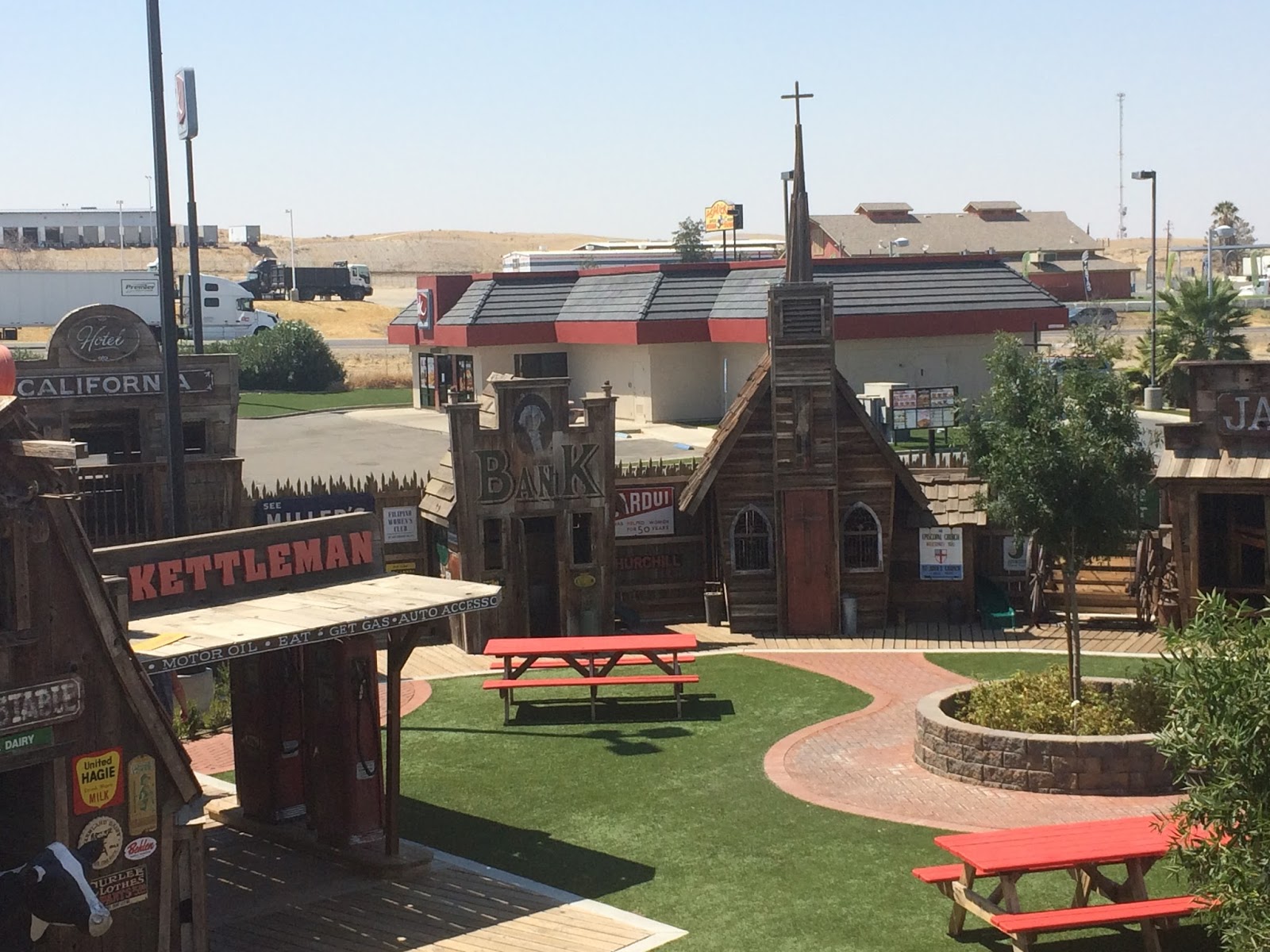 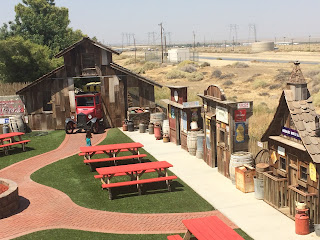 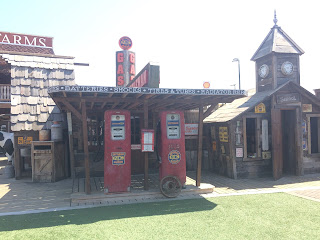 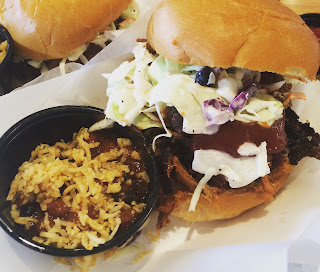 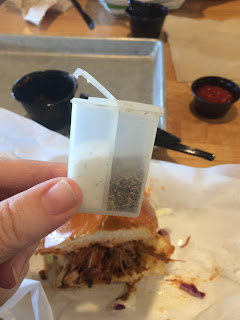 I was like this could use a little bit of salt and my mom pulls this out of her purse. She cracks me up!

After lunch we were back on the road. I swear driving through California was the most boring part of the whole trip! I-5 is boring and everything is dead in August. There was a big fire down south and I was a bit worried about what we might run into. We did hit one section that had about an hour of barely crawling traffic but we never did really see what was causing it. The fire did make for a beautiful sunset in the rearview mirror though! 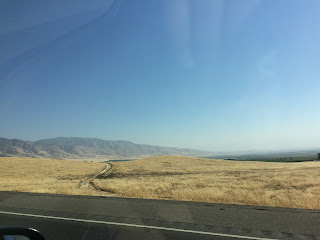 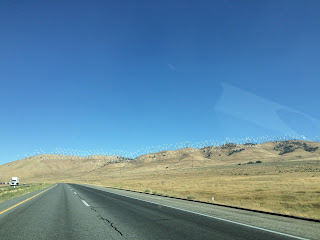 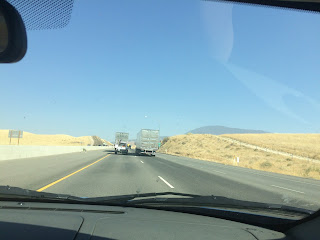 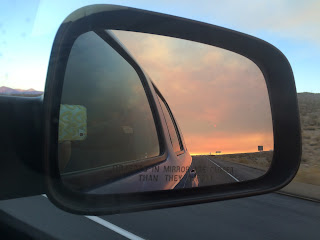 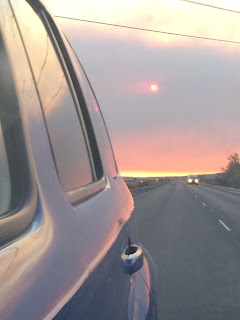 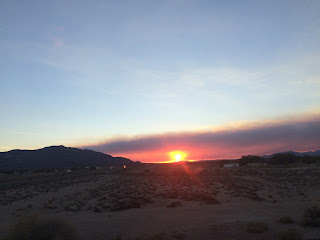 and we drove with the full moon ahead of us for the rest of the night. 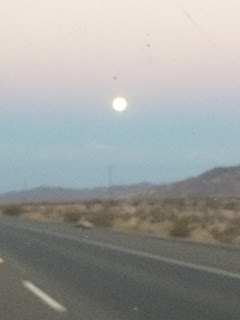 The goal for day 1 was to get to Flagstaff, Arizona. I'm pretty sure my mom took a partial picture of the Arizona sign but I can't find it in my pictures. We stopped several times for potty breaks and to stretch. We got almost to Flagstaff and then started looking for somewhere to stay because we were exhausted. We pulled off a couple of times but there was nothing that looked nice enough that we wouldn't get murdered. We even went into a lobby of one place but it smells so much like mildew we just turned around and walked back out. 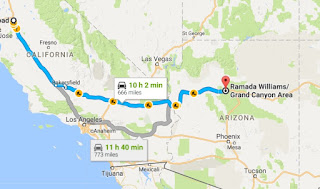 Eventually we ended up stopping at the Ramada Inn in William, Arizona. It was about the only thing non scary that was open. We went in and got a room. The woman at the counter was super weird and was telling us to make sure and check our bill so we don't get double and triple charged like some people. Well, that makes me feel awesome about staying here! I was super tired though so I was like hey mom make sure you check your bill ;)

Our room was on the 2nd floor closest to the stairs (elevator was in the middle of the place I think?) so we tromped up 2 flights of stairs with all our stuff at like 1 something in the morning. The room smelled weird but not as bad as that one dive we stopped at. We could see some mold or something but the vent in the room. I was hoping we wouldn't die of asthma attacks.

I woke up about 5am feeling like things were crawling on me and then looked at Yelp and then really couldn't sleep anymore lol. I think next time I go on a trip I'll just go ahead and book my hotels in advance.

This was the view in the hallway to our room, maybe an old laundry room or something? I was just glad I didn't have a little kid with me because you know they'd want to go pull on that. 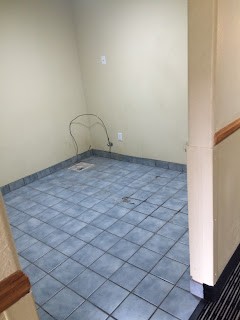 When we were getting ready in the morning there was this guy on his cell phone walking up and down the hall way talking. I could hear every word he was saying and finally yelled it out and then he left lol. Like go pace outside on the phone you jerk wad! 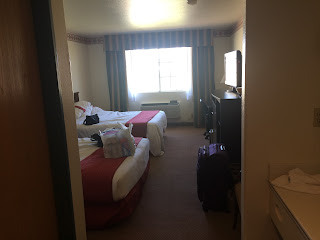 This was the view out the window by the stairs, very pretty! There were a lot of signs to the Grand Canyon but my mom said she didn't have any desire to go there and we didn't really have time anyways. 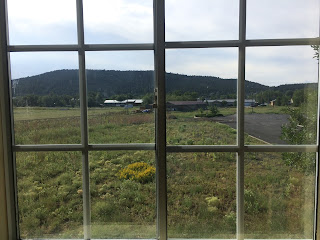 Mom made sure to check out and get her bill and we were only charged one time so that was good! Onto day two of driving!

wow. You did go for the first day - well except that hotel. I hate sitting in a car - or i should say my back hates sitting in a car. 10 hrs in one stretch is great. We drove to florida and only did 8 hrs the first day. It was raining so hard we couldn't see in front of us so we had to pull off the highway and find someplace to stay. First place smelled so bad, so I understood why you left - we did the same thing Julie! Normally Rick would tell me to buck up and deal with it, but it smelled so badly that even he was grossed out. :-)

that was to read - you did good - not go. Oh fat fingers.